There is certainly some straaaange architecture on this campus. Sometimes I really wonder about the people who built this place.

I mean, what manner of beast is this? At first I took it for a bird of some sort, maybe even one of Odin’s ravens sent to spy upon me. People say that *I’m* nosy and into everything, but Huginn and Munnin! Those two have poked their vicious beaks into all corners of the nine realms. Some day I shall pluck them bald and stuff a sofa cushion with their inky feathers and sit on it and laugh.

But no. It’s not a raven. Imagine my excitement–the human female says that this is a “bold evil!” Just the sort of ally I can use, if it was sculpted from real life and I can find the model. Just look at that wicked beak and that fine beady eye!

[later] By Fandral’s Foppish Fripperies! I am now given to understand that this gorgeous creature

a) was sculpted in the last century and
b) is nothing but a tiny insect known for gnawing on vegetable fibers.

I feel a bit better knowing it was capable of devastating whole systems of agriculture, but wouldn’t it be even better if it were eight feet tall and could oh, I don’t know–spit acid? 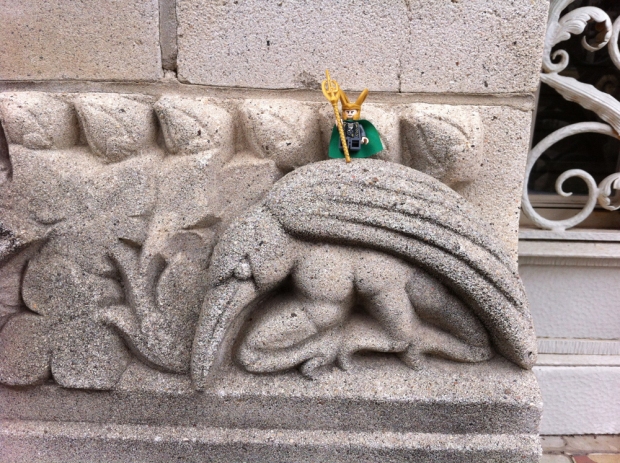