I do not know what this structure is, but I am strangely tempted to go inside* with my companion and see what happens.
>|: [ 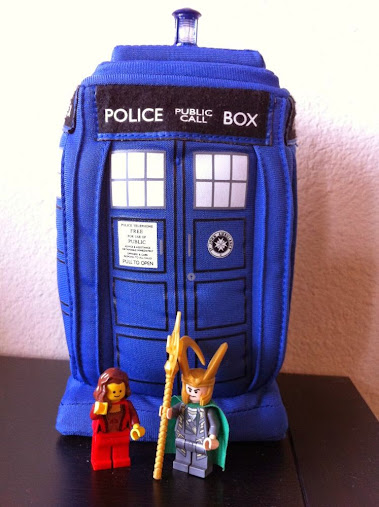 On this trip, I also learned that it is a Midgardian custom to bring one’s host and hostess a greeting present. It is a custom in Asgard as well, but I was unprepared this day. Lacking a suitable gift, I at least made sure to leave a calling card.*

* I was informed that the spot upon which I stood is a delivery point for ice.  I am Frost Giant–bring it on!  (Also, I have no idea why humans prefer to leave messages upon food stasis-storage units.  Granted, they spend a lot of time eating, so a message left here is sure to be seen, but still…)

Sigyn and I have accompanied the humans on a short trip to another city to celebrate the birth anniversary of one of their infant friends. Apparently it is customary in this realm to observe such occasions with cake. This is a tradition I can heartily endorse! There is no such thing as too much cake.

I must confess, I have never before seen a plaid cake. I am not certain that cakes should be plaid. However, the border around the edge (Sigyn informs me that this is called "piping"– I do not know why. I don’t hear anything) is green. I approve.

I have determined that my mischievous influence can span the continent. Score! Let me see if I can condense the tale…

The human female frequently makes purchases of various goods as part of her “work.” On the fifteenth of May, she ordered two liters of chloroform. (I don’t know what she wanted it for; possibly she uses it to keep the rowdier students under control.) The chemical shipped from Illinois promptly on May 16 and began its journey toward Texas. It vanished in a town called Austin on May 23 and was given up for lost.

As there was an urgent need for the chloroform (students rowdier than usual?), the female purchased a small quantity from a local source as a stop-gap and called the vendor to initiate a reshipment of the missing two liters.

Still with me? On June 11, replacement chloroform was shipped from California, with a projected delivery date of June 16. The package was mis-routed, put off the truck, put back on the truck, and given a tour of the western half of the nation. June 16 merrily came and merrily went, and I enjoyed watching the human female rant and froth at the mouth.

On June 20, the *first* shipment showed up, with nothing to say for itself except, “Sorry I drooled and melted the packing styrofoam.” 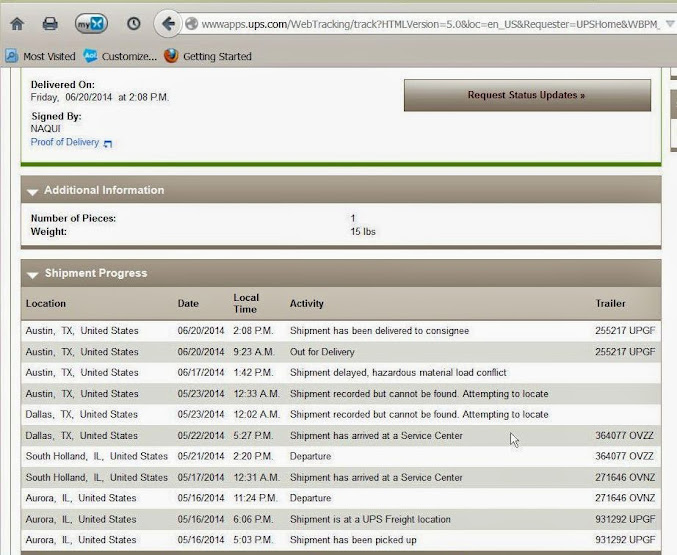 Meanwhile, the second shipment arrived in a place called Dallas. Where it languished. For nearly a week, while the delivery date continued to show as June 16. (My magical abilities are great, but even I can’t go back in time!) It was at last delivered on June 26, in a stove-in box and no explanation.

So now she is swimming in confusion and chloroform. (Well, not actually, because that would be most unhealthy.) I consider this one of my finest pranks, and I have left her wondering not only what happened (I could make the boxes talk to satisfy her curiosity, but of course I will do no such thing) but also why in the Nine Realms one two liter shipment was billed as weighing 8 pounds and the other–identical!– was billed at 15!

The Biology students where the human female works are doing a unit on Forensic Science. They are given a “crime” to solve and evidence to evaluate. Everything is strictly by the book.

What do you mean, “Uh oh. There goes the case”?

Of course, after "working" in the yard, I need to clean up, carefully washing and drying my hands on the human female’s fluffy white towel.

I don’t know why, but in this household, yard work day always seems to be followed by laundry day. Humans are so predictable.

The burrs were nice, and should be properly annoying, but the flower beds will need something else. I have found these fluffy seeds, which I hope will grow into plants that will make MORE fluffy seeds. If each of those grows into a plant that makes fluffy seeds, inside of three years, the humans’ garden should look like a feather mattress exploded. The air conditioning filter and the window screens will clog up, and everyone will sneeze continuously. If I’m *really* lucky, the city will issue a citation for a messy, weedy lawn, and the homeowners’ association will send the humans a nastygram. Never let anyone say I don’t think things through.

The human female did a lot of weeding over the weekend, making quite a bit of room in the flower beds. Obviously, she is now in need of more plants! I have gathered many of these prickly little burrs and shall distribute them around the garden…all except for the armful that I will scatter in her sock drawer.

Weekends mean yard work. Oh, not for me. Grass and weeds are beneath me, and I only notice what is blooming because Sigyn enjoys flowers and drags me around, pointing and exclaiming. No, I leave the chores to the human female. I recline in the cool indoors while she struggles and sweats, and when she comes in dripping and covered with grass stains, I twitch my cape away from her sullying touch and make “you smell bad” faces.

But never let it be said that I don’t do my part. See? I have helpfully adjusted one of the wheels on the lawn-cutting machine. It is now a half-notch higher than the other three, which will make for poor steering and some eye-catching stripes in the turf. (Need I add that I’ve frozen it in place so that it would take a blow from Mjolnir to put it right?) Job done! Where is my ice-cold lemonade?

Yesterday’s talk of griddle cakes prompted me to demand some of the human female. She grudgingly obliged, but look at what has occurred!

This large round breakfast mocks me. I shall have to wipe the insouciant smirk off its starchy little face.
>|: [