There is some V.I.C. in this compartment. Very Important Clutter.

First we have these tinted glasses. 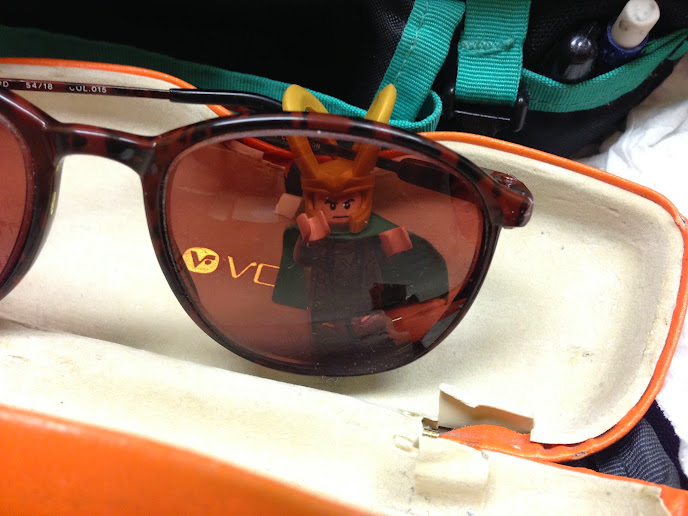 They keep the sun from hurting her eyes and keep me from having to see so much of her face. It’s win-win. Note the obnoxiously bright orange case. She had to get that because she kept losing her old case–in the backpack. 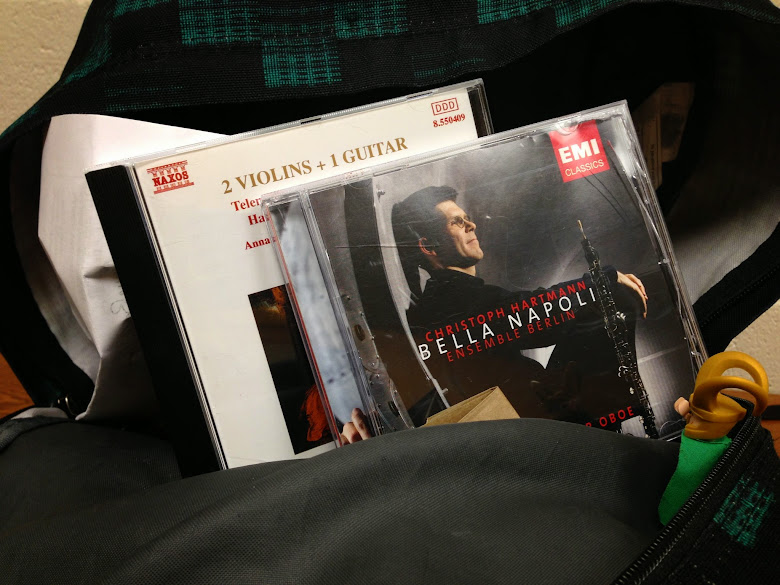 Music. Always music. I think it drowns out the voices in her head. Her taste runs to the baroque. Mostly I don’t mind it, but a steady diet of chamber music can get old. Perhaps I should broaden her collection? I shall have to work on that…. 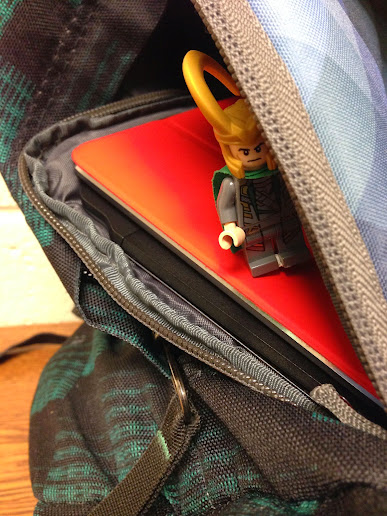 Her computer tablet is usually here, in its snug blue case. I must admit that I am surprised and rather impressed that she hasn’t lost or broken it yet. I am not surprised that she hasn’t figured out that her online opponent in Qwirkle, a gifted player who uses the screen name lowkey579, is none other than her favorite Jotun houseguest. 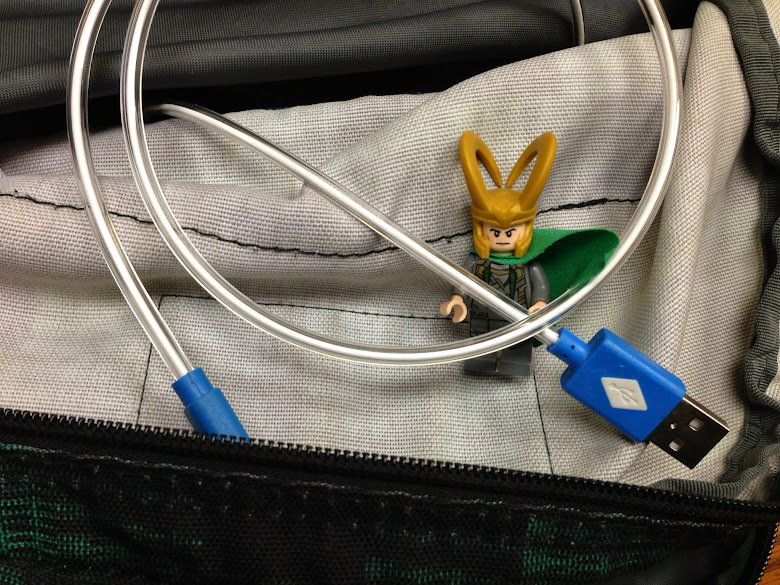 Umbilical cord for the tablet or the phone. It lights up blue when powered on. (I actually sort of like this, though it would be better in GREEN.)

This is also the compartment where the human female stores her mobile pharmacy. The various eye goops have their own little bag. 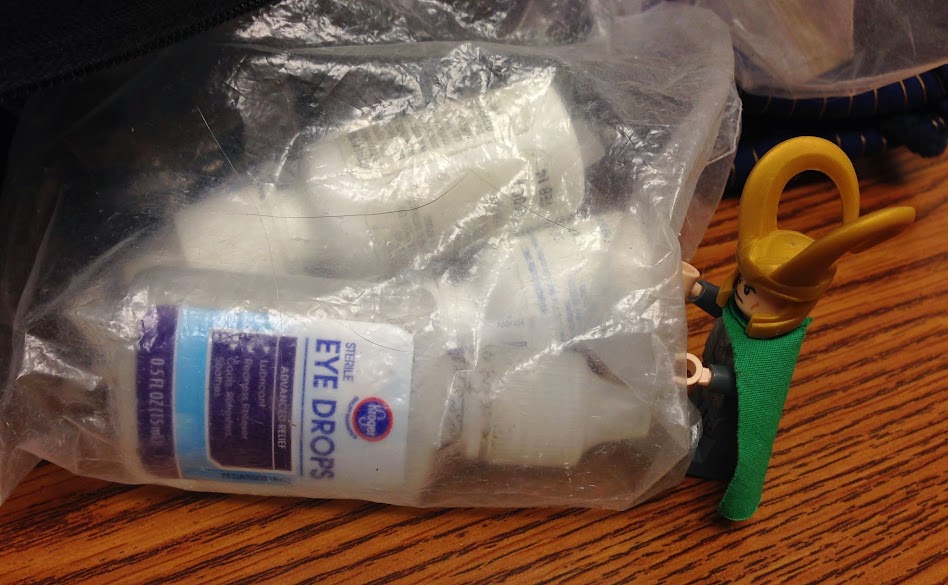 But this is merely a start. Just look at this. 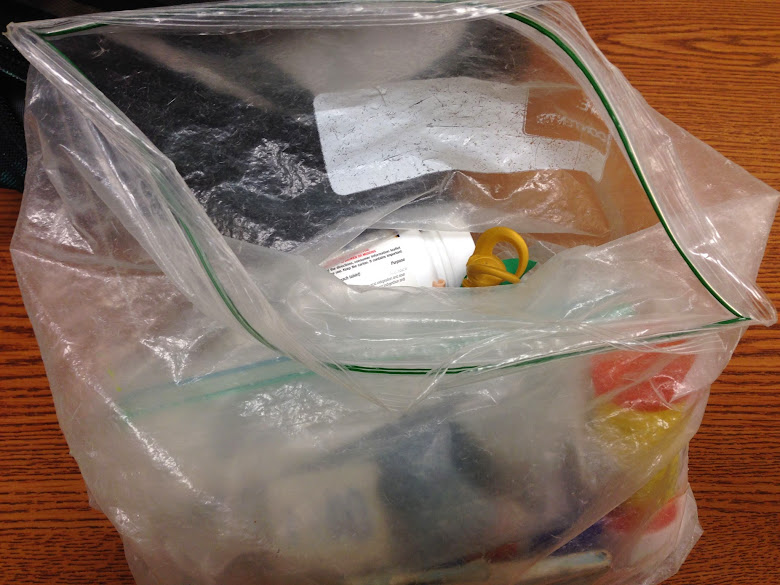 She has medicaments for every ailment and megrim under the sun–one for heartburn, one for coughs, one for sneeziness, and–count them!–three separate medicines for headaches. My favorite sort are the tiny round ones that taste pleasantly of mint as they dissolve on the tongue. She counts them carefully, as they come in prescriptions of only nine, which have to last her all month, but she always seems to be missing one or two. Ehehehehehe! I wonder why?

The other two kinds she has stuffed into an old pill bottle. ( I keep hoping the authorities will stop her in an air transport terminal at some point and demand to know what they are and why they do not match the label. It is such fun to watch them work someone over!) 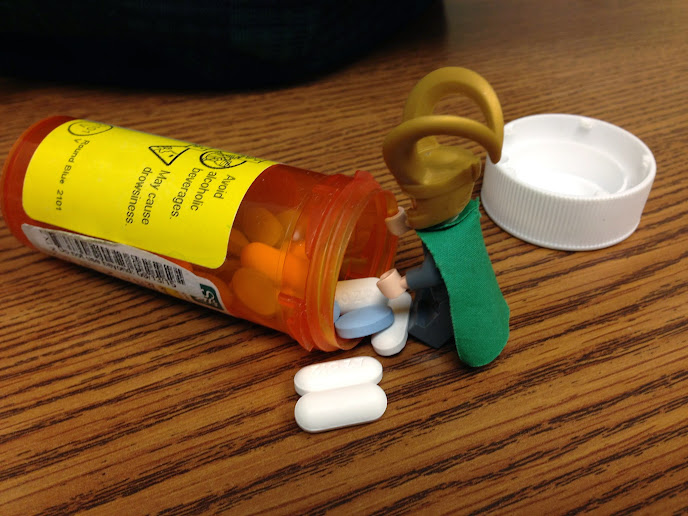 The lid is supposedly child-proof and difficult to open, but it is most definitely not Loki-proof. I have now be-spelled it so that it will unscrew itself about once a month, and she will have to hunt the dusty pills in the bottom of the bag. Now, is this blue one the kind that will destroy her liver if she takes too many, or the kind that will chew through the lining of her stomach if she is unlucky?