Finals are over, the hideous backpack is fading into memory (though that rubber bug will haunt my nightmares for some time to come), and the weather is actually rather pleasant (only three quarters of an inch of rain today!), so I predict that Sigyn and the human female will want to go walkabout and do what they call "botanizing."

Aaaand here they are, proposing just that. The mortal desires to hunt for a specific sort of "yucky plant" in the local wilderness park. Sounds…thrilling. But I could do with some fresh air. By all means, let us proceed.

The big flush of spring wildflowers is past, but the late-spring flora is fascinating in its own right–or at least, Sigyn thinks so.

I think we can all agree that if there is one thing Sigyn knows, it is how to choose posies to complement her coloring. She assures me that she spent hours cutting the fringey border on this firewheel with her little scissors. Riiiight.

Yow. This plant has BRIGHT flowers. The human female says that it is not native. It has been planted here in the butterfly garden near the park entrance because butterflies like to sip the nectar.

I tasted some. They can keep it. (And the foliage smells icky too.) However, it is not the "yucky" plant we came to find, so we are moving on.

Sigyn is quite taken with this pink prairie gentian. She usually likes to climb plants, but this one’s stem is so slender that it won’t bear even her tiny weight. Mortal! Hold this blossom so that my beloved my inspect it.

It has a teensy cousin that is just as pink. 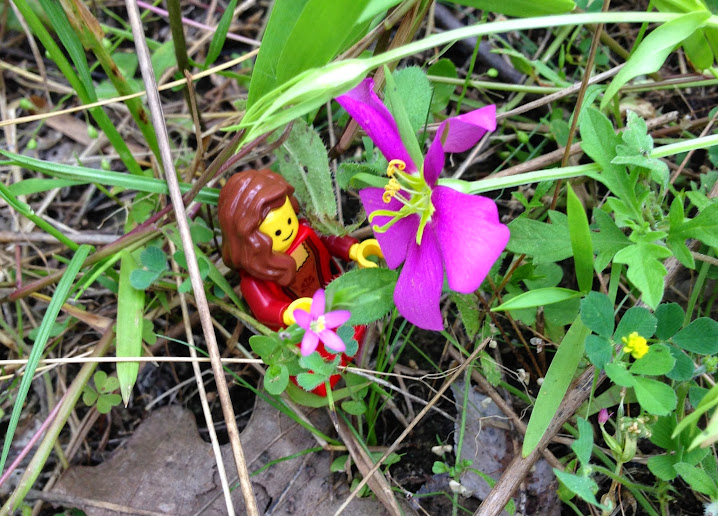 Ow! Sigyn’s "squee" of unfeigned delight was so high-pitched that she probably has the attention of every dog within a ten-mile radius.

So where is this yucky plant the human female needs to investigate? Supposedly it hangs out in dry, open, grassy areas. Not much is dry out here right now, but up ahead is an open grassy area. Shall we look there?

Thaaaaar she blows! (I have not the least idea why, but this is something Midgardians often say. I thought I’d try saying it. It is silly and I won’t be saying it again.)

The flowery bit at the top is very climbable and not at all yucky. Once again, the human female is mistaken.

The human female is busy peering and measuring and making notes so that she can tell just which species it is.

She says it is "pollinated by moths whose eggs hatch into caterpillars that eat the seeds." That seems counter-productive, wouldn’t you say? She also says it has "anthers that glow under ultraviolet light" and that you "can make soap out of it." For the sake of my sanity, is there any way to turn off this rambling, sleep-deprived, gushing spigot of botanical trivia?