The summer university term has begun, and ordering for fall has commenced. Still, things are fairly quiet. Mischief Level: 4.

Monday: The human female started ordering Dead Things. I delayed an important email, so a very nice 11% off coupon good on the human female’s order of 16 preserved hagfish showed up the day AFTER she submitted the order.

Tuesday: I arranged for the water in all the sinks in all the women’s restrooms in the building to be cut off without warning. On the first day of the semester. Getting it back on again was a three-call finagle for the human female. I always enjoy it when she has to deal with outsourced maintenance.

Wednesday: On the first day of labs, the floor stripping and waxing was still not done. No, ehehehe, I don’t know who told the custodial crew they could take as long as they needed with the lab rooms. and put all the lab equipment out in the hallway. As of today, it’s still not all done. The labs look great, but the hallway is stripped. It’s hard to wax hallways when there are students swarming about. The crew will finish tonight or Monday. I’ll see to it that they put everything back in place just a bit before it’s dry, so that furniture sticks to the floor. (The best part about all of this was that the human female got chewed out for end-running around the building proctor to get the labs seen to….)

Thursday: The same construction crew that cut the water off parked in a string of 24 hour reserved faculty and staff spaces. Including the human female’s. The contractors swore they were told they could park there. Can I help it if I sound just like their supervisor on the telephone? More fun with the building proctor!

Friday: (This is my favorite!) I nudged the human female’s finger as she was selecting a vendor for another order of Dead Things. I will be teleporting out of state to go see the faces on the good people in the order fulfillment department of the Nebraska Book Company as they try to figure out what they are supposed to do with an order for a pail of 760 pig intestinal roundworms, male only. "A pail of plenty porcine parasites, pronto!" Say that three times fast!

On the home front, the feline is being treated for a malfunctioning thyroid. The medicine had some unexpected side effects. It now appears the humans have a choice. They can have a thin, unmedicated, prowling, yowling cranky termagant who keeps them up all night OR a pitiful, medicated, subdued, puddingbeast with no sense of balance, who wobbles when she walks, falls off the sofa, and topples over trying to wash. None of this is my doing, but when the cat feels ill, I do enjoy directing her to Things Which Should Not Be Barfed Upon, which is how the floor, the sofa throw, the bed quilt (thrice!) and the human male’s laptop all got a good wash.

On second thought, this week’s at least a Six.

My beloved and I have accompanied the human female to a place she calls the "Herbarium." At first, I thought this was going to be a place of herbs, sweetly fragrant with thyme, rosemary, and pipperjoy (which is grown in Asgard but is very uncommon on Midgard). Sadly, no. Remember all the plants we collected and smashed? This is where they ultimately end up.

There is evidently some identification work to be done today. Much as she would like to think she knows every plant out there, she so very much doesn’t. When collectors send plants they do not know the names of, the human female has to sit down and figure out what they are.

The human female says part of it is a liverwort. Truly? That’s the best name you can make up? The bit with actual oblong leaves is…. something different.

She thinks it might be a species of Callitriche, but since the sample doesn’t have any fruit, she can’t be sure. That is a very good "out", blaming the identification failure on the plant and not her failing acumen. Poor old Number 533 may just have to remain unidentified.

This one is much less tiresome. It has nice, big, colorful parts. 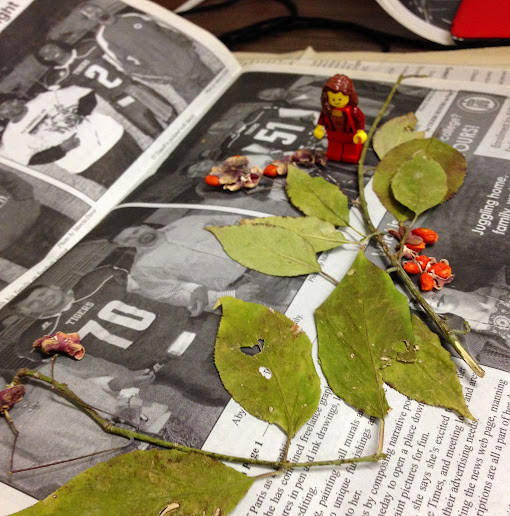 Sigyn, come out of those papers before you get folded away, boxed up, and left behind!