Ah. Shade at last! We have meandered down into the bottomland part of the park, near where we heard all the frogs the last time we were here. The dappled shadows cast by tall elm and oak are most welcome.

These pale flowers almost seem to glow in the shade. The human female says they are members of the mint family, something called “American Germander.” Make up your mind, woman! Is it American, or is it German? 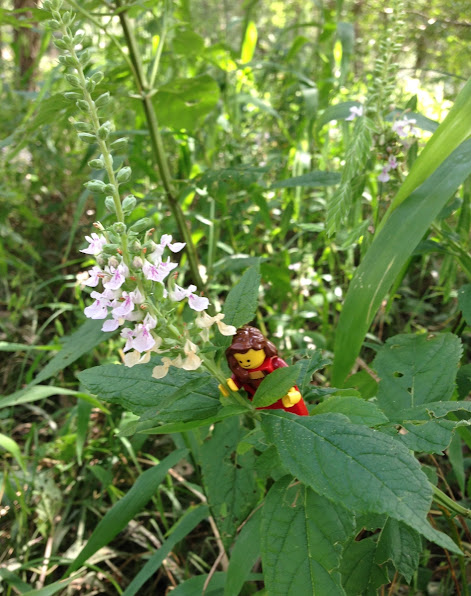 Is the stem square, Sigyn? The human female says that’s supposed to be a character of mints. How about a “two-lipped corolla”? Do you know what she’s prattling about? Looking at them closely, I can see that each flower has all its petals pulled to one side. If anything, they are one-lipped. Perhaps they have not read the botany texts. (And being one-lipped, they are probably poor kissers. Perhaps they reproduce vegetatively.)

Oops! Sigyn, the plant parade is moving on without us. We should– Ehehehehe! Odin’s eypatch! Where did Sigyn go? All I see is this fallen trumpet creeper blossom. 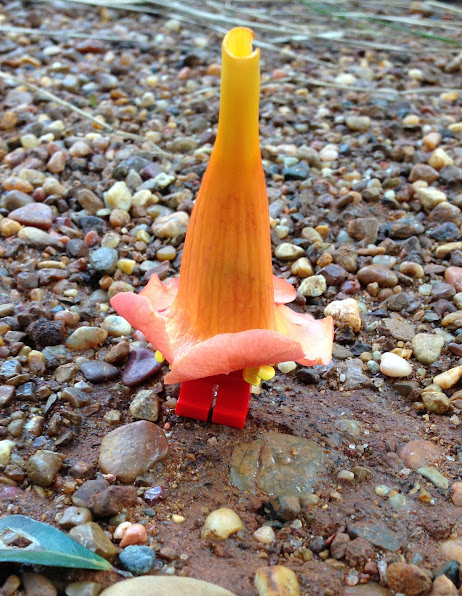 Oh, there she is! There’s the smiling face I love!

That is a very fetching bonnet, my love, though it is getting pollen and nectar all over your hair. Oh, well, we have already established that you have a very good shampoo…

Well, will wonders never cease! We seem to be reaching an end to our perambulations. But here I must admit a failure. I had a plan for this walk, one that involved a tick or three falling out of the trees and down the human female’s neck. Her loathing of ticks is well-known, and this is definitely the habitat and time of year which *should* have resulted in at least one finding its way inside her clothing. However, she’s rather liberally anointed with something called “DEET” (I think it’s an acronym for Don’t Eat Earthlings Today) and there have been no Acarid paratroopers. Rats. I was hoping for some shrieking and flailing.

However, we are not without entertainment, for a small explorer of the Molluscan persuasion has descended upon one of the other hikers and beslimed him most artistically. 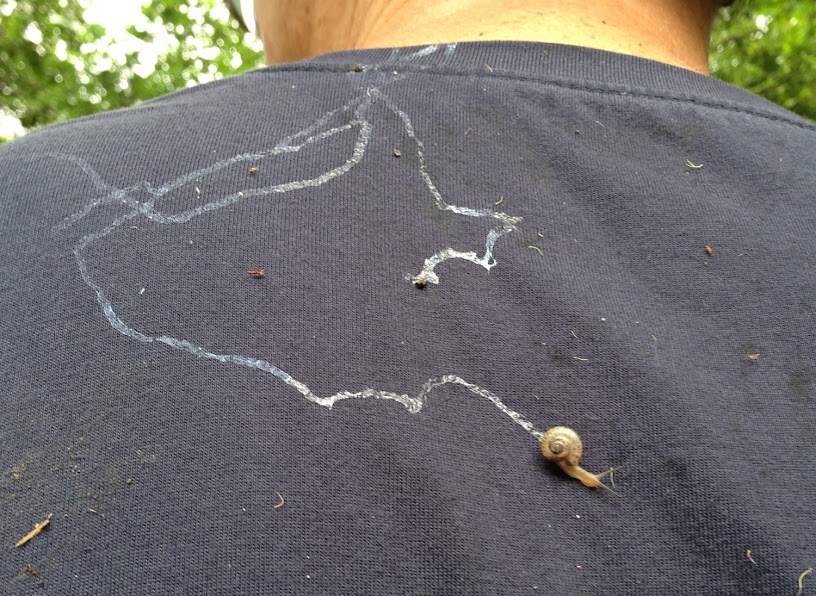 It almost looks as if he is trying to write something. A Gastropodian Manifesto! In a year or so he should have the first paragraph finished.