It is Sigyn’s turn to pick the next game, and she has chosen Tier Auf Tier, or Animal Upon Animal, for those whose command of various tongues is not as great as mine.

We have not actually started playing, because Sigyn is busy making friends with the animals. Mooooo. 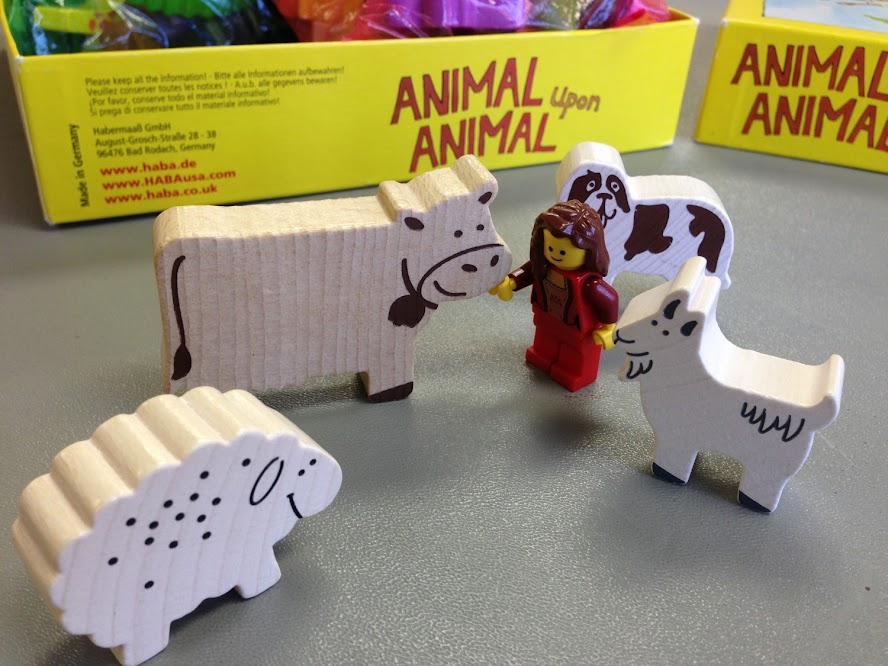 This giraffe seems to be a bit more standoffish than some of the others we have met. 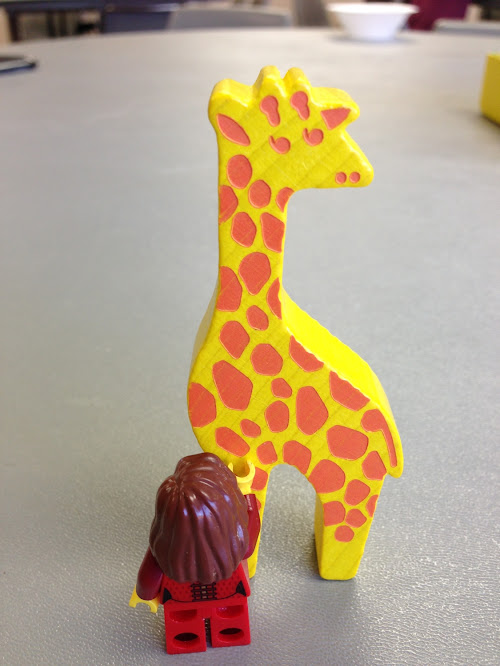 The snakes, however, seem amenable to a new overlord. 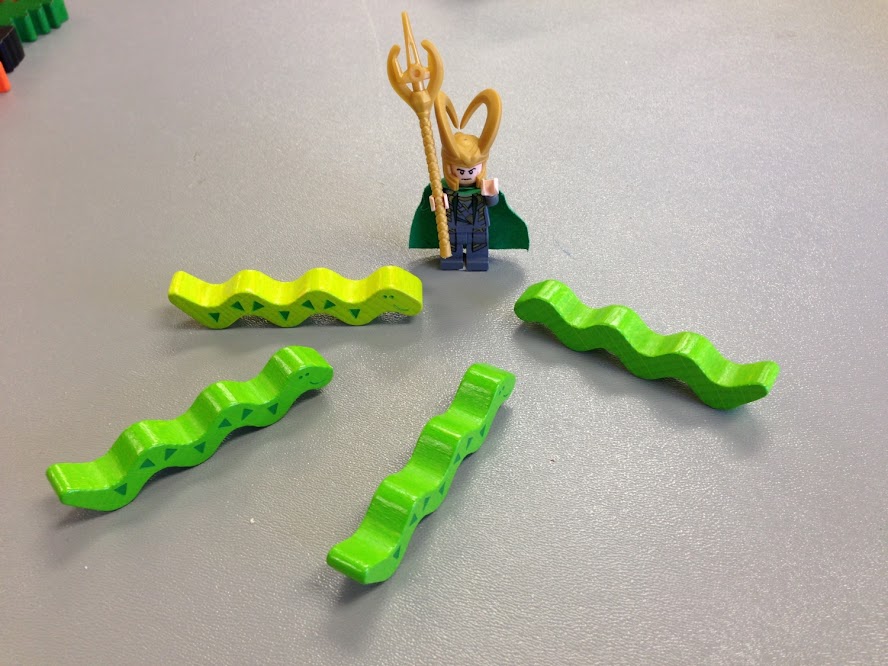 Let us begin! The object is to place all of one’s animals upon this crocodile, without any toppling over. Seems simple enough. We are playing with the animals from several editions of the game, so this may become tricky very quickly. It is my turn first. 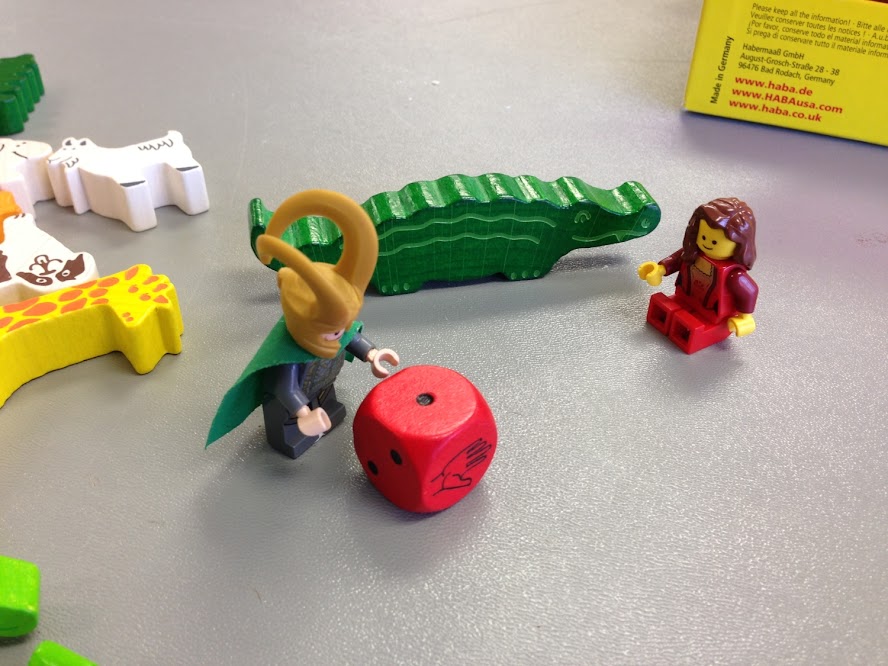 I have rolled a one, so I must choose an animal and carefully stack it. 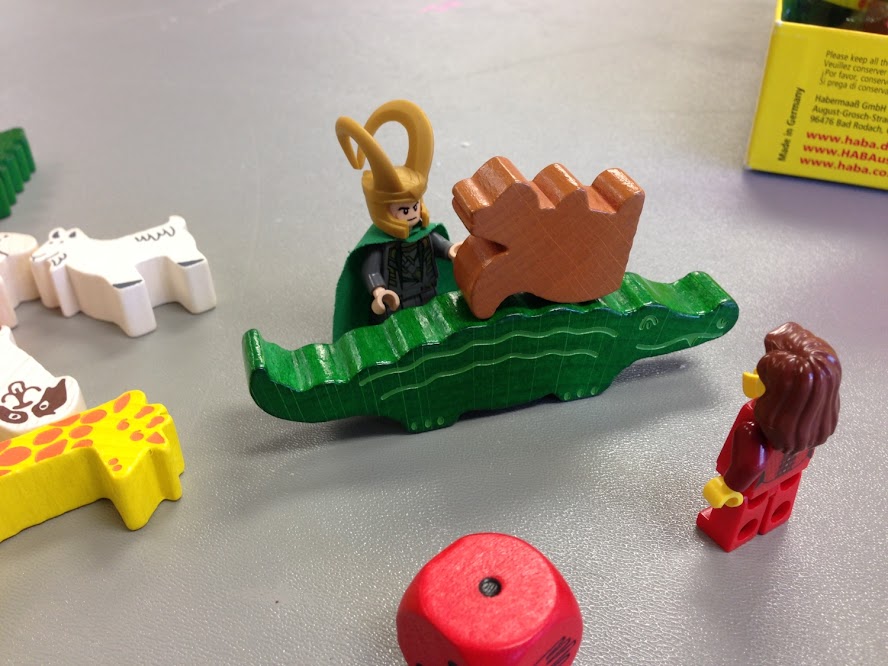 Squirrel! Not a problem. Your turn, Sigyn. 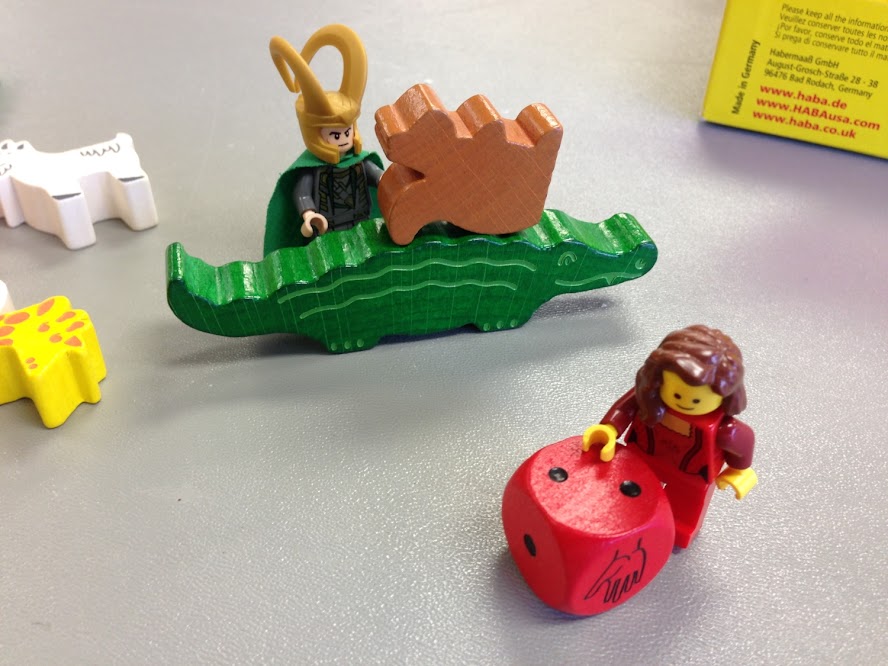 Oh, you’ve rolled a two! That means you will go out more quickly, which is good, but putting on two in one turn can be tricky. 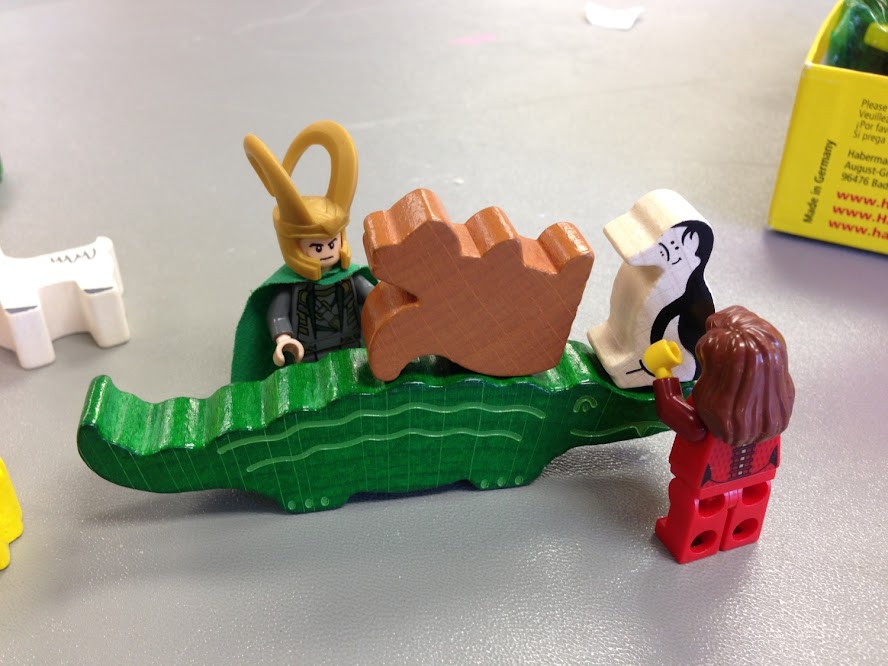 The penguin has gone up easily enough. 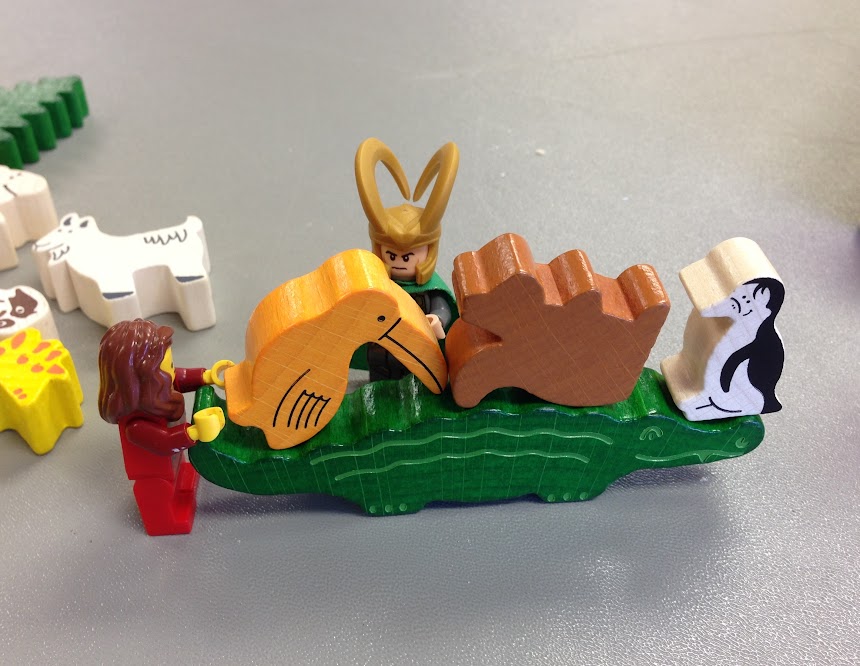 And so has the toucan! Steady, my love. He is hanging over a little on this side, which may cause problems later.

My turn again. Oh, this is lucky! 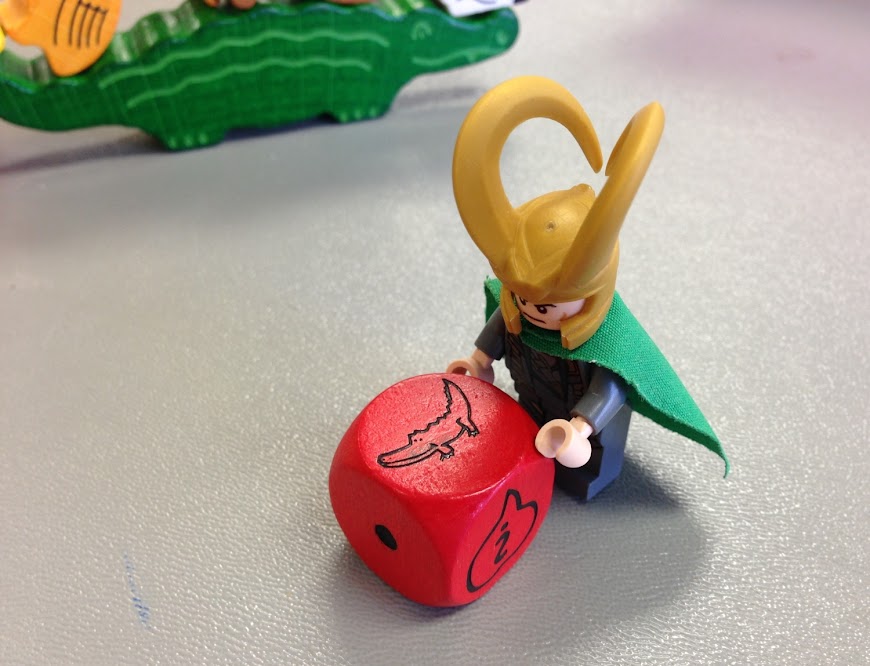 Rolling a crocodile means I may place my animal on the table top, as long as it is touching the crocodile. 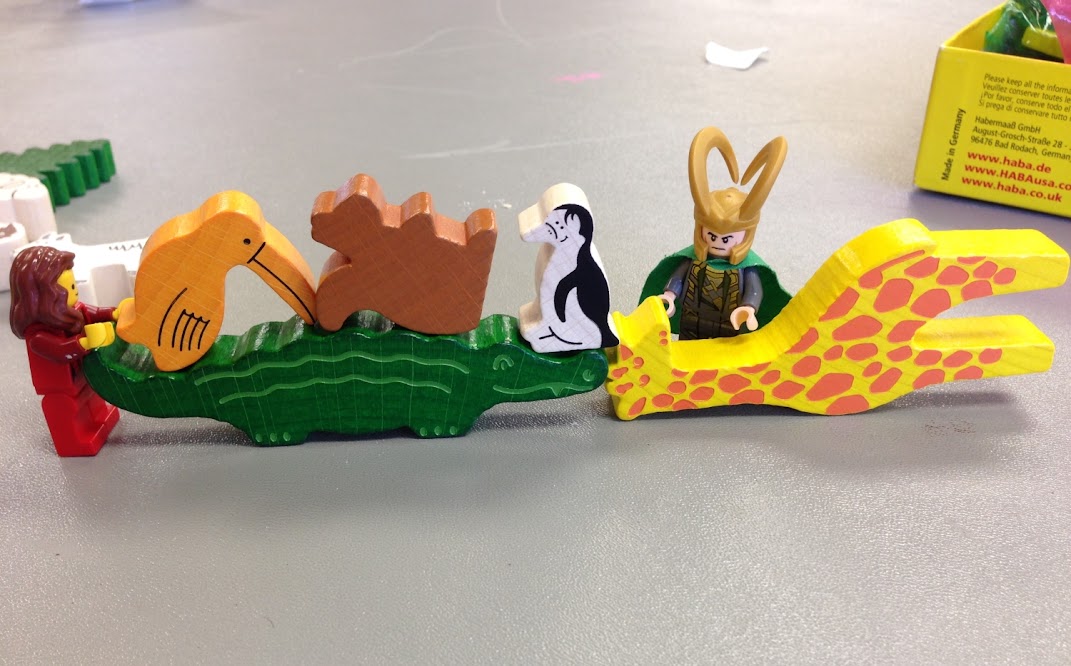 That is a really good way to get rid of the awkward giraffe. 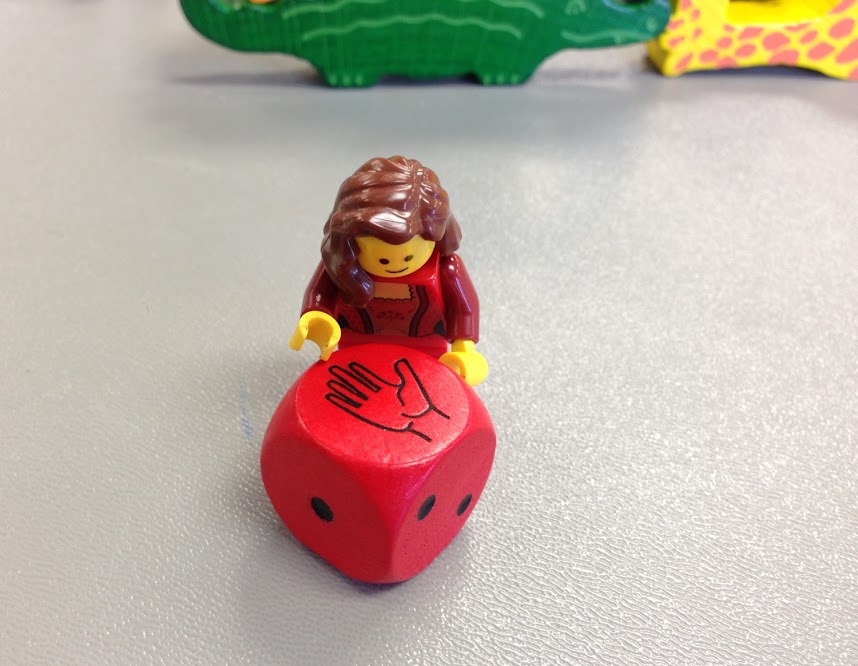 Sigyn has rolled the hand, which is the best roll you can get. It means she can give one of her animals to me and I have to put it on. It’s a no-risk way to get rid of an animal that is heavy or oddly shaped or that just won’t fit on whatever is already in the stack. 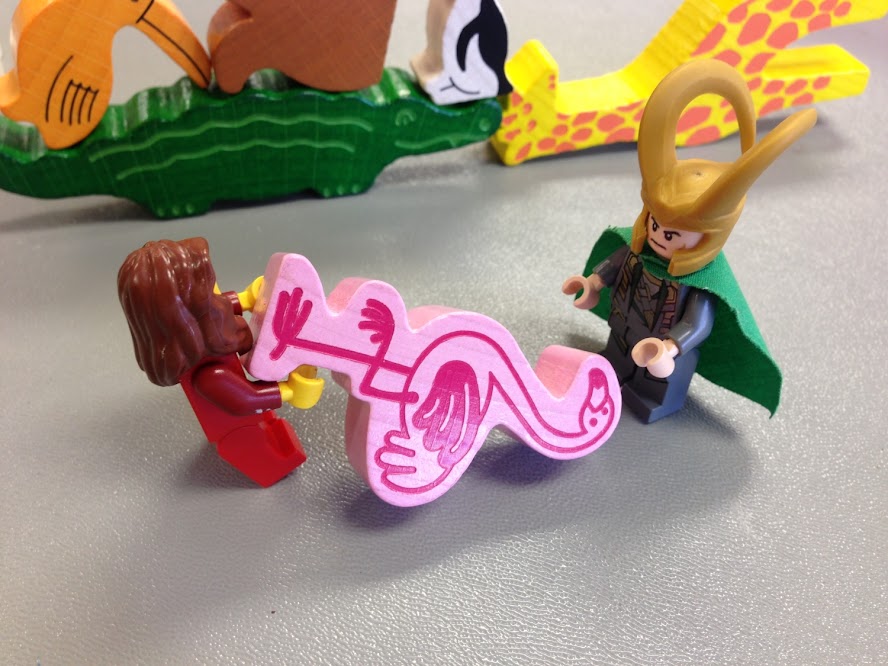 Gee. Thanks ever so. 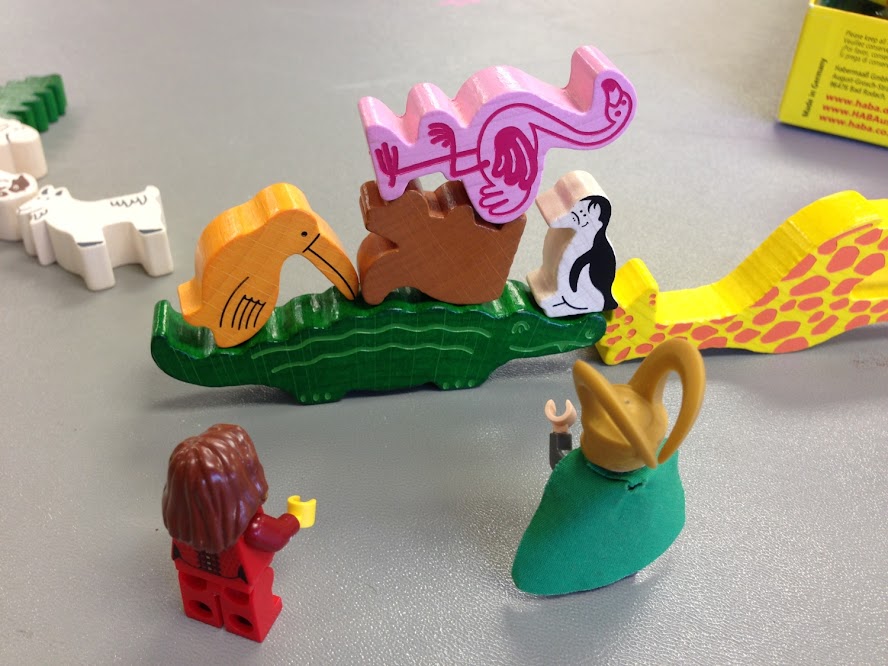 Ha! One flamingo, neatly disposed of! (I may have had to use my magic just a tad to get him up there…)

Now it’s my turn. I’ve rolled another one. 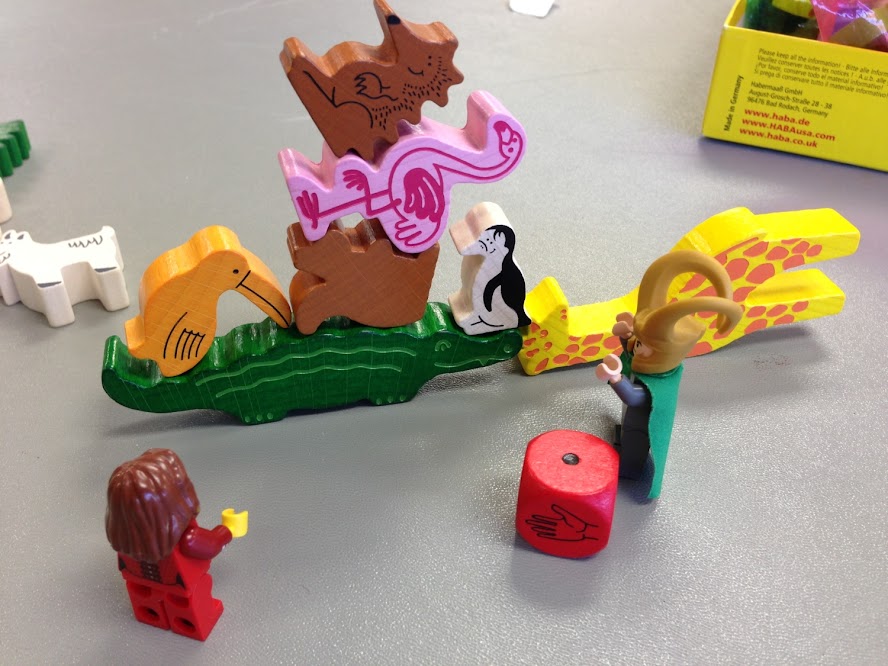 The knobbly hedgehogs are actually fairly easy to stack. If you have two, their spines interlock nicely. 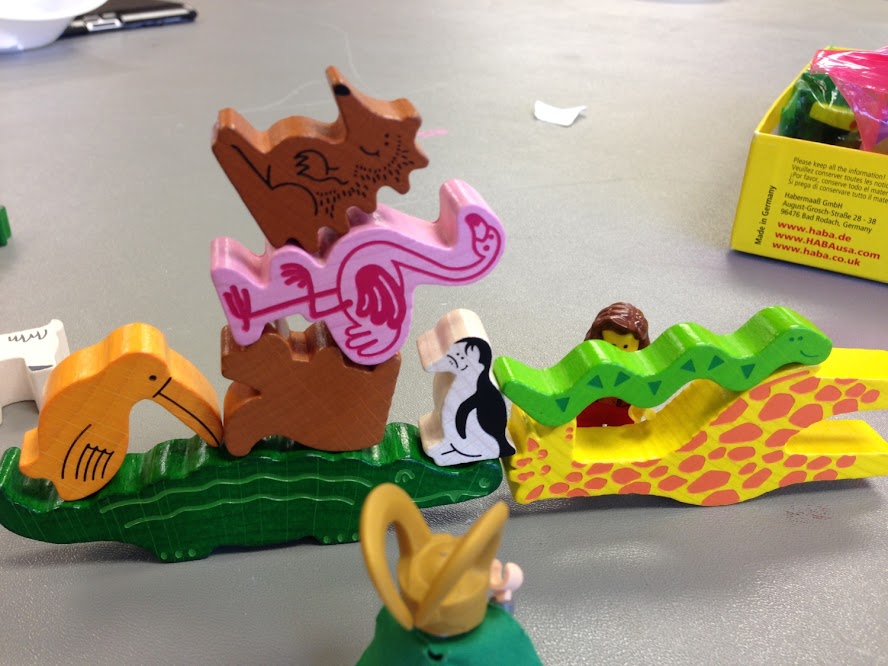 Sigy’s one on the die has earned her a chance to add a snake to the growing pile. Well done, my love, but dare I say it? Snakes are easy. They are light and can induced to interlock as well. 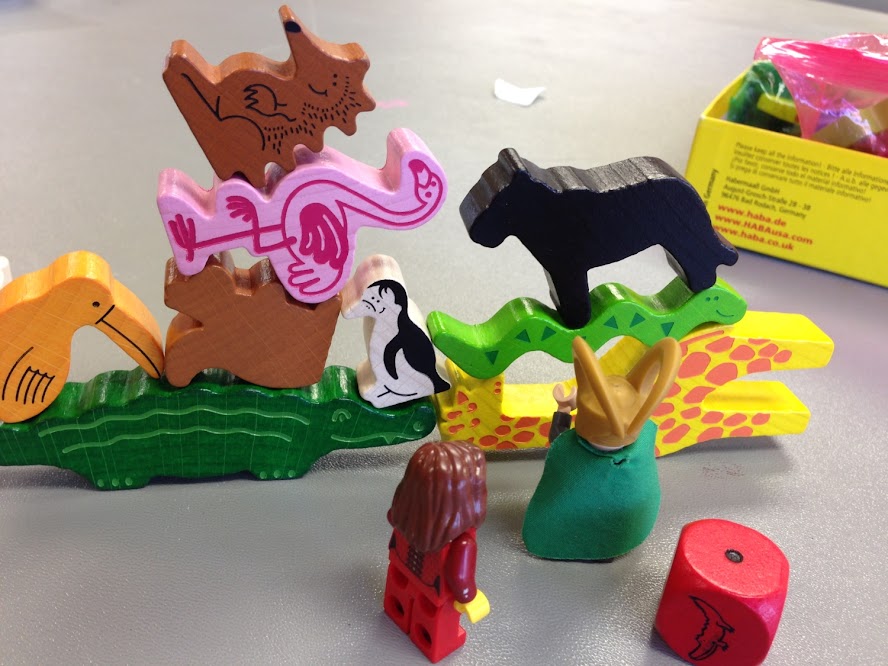 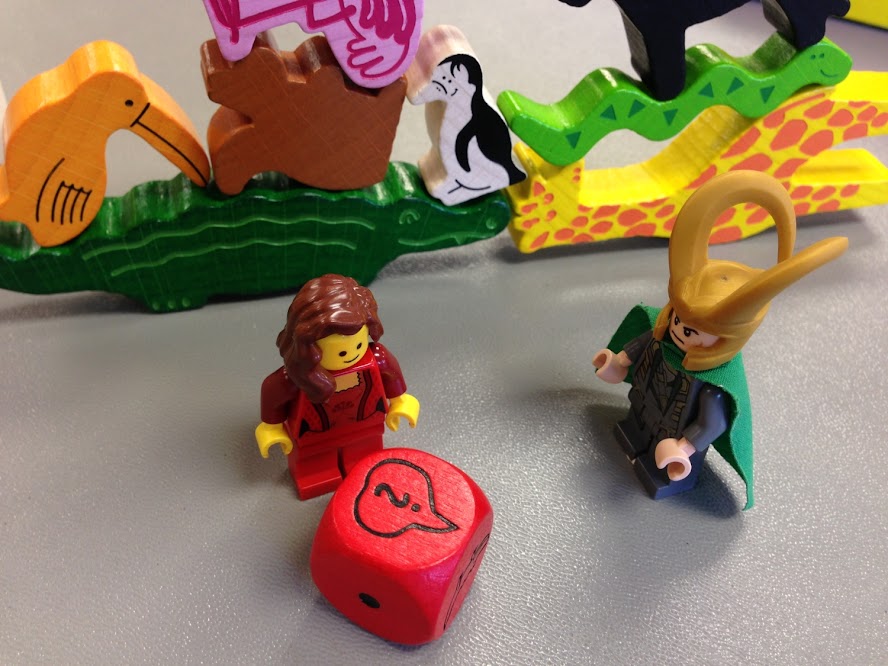 Sigyn has rolled the question mark. That’s good for me, because it means I can tell her which animal she has to put on next. I could choose something really difficult… 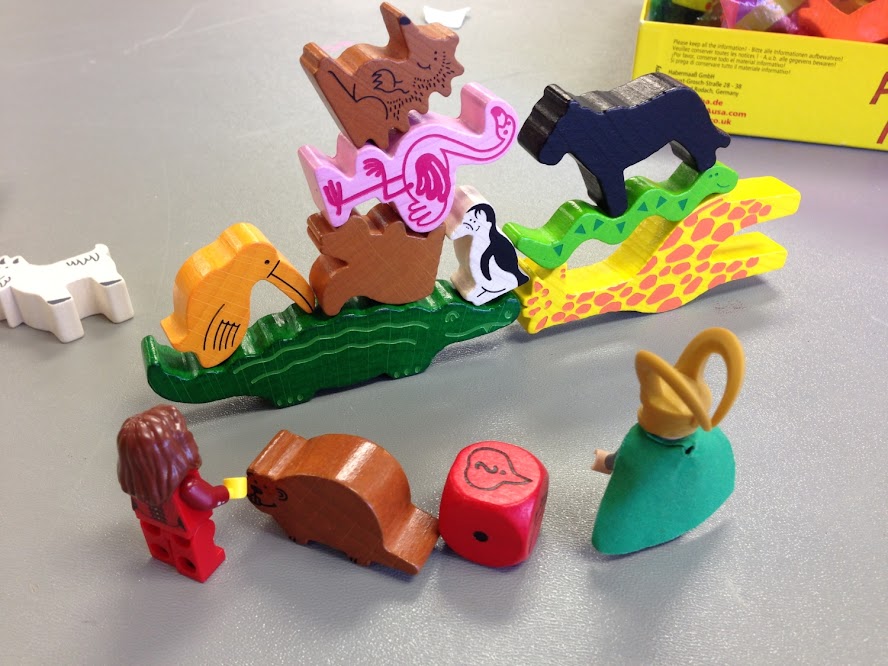 …but I love to see her smile, so I’ll tell her to put on the beaver. He seems very obliging. 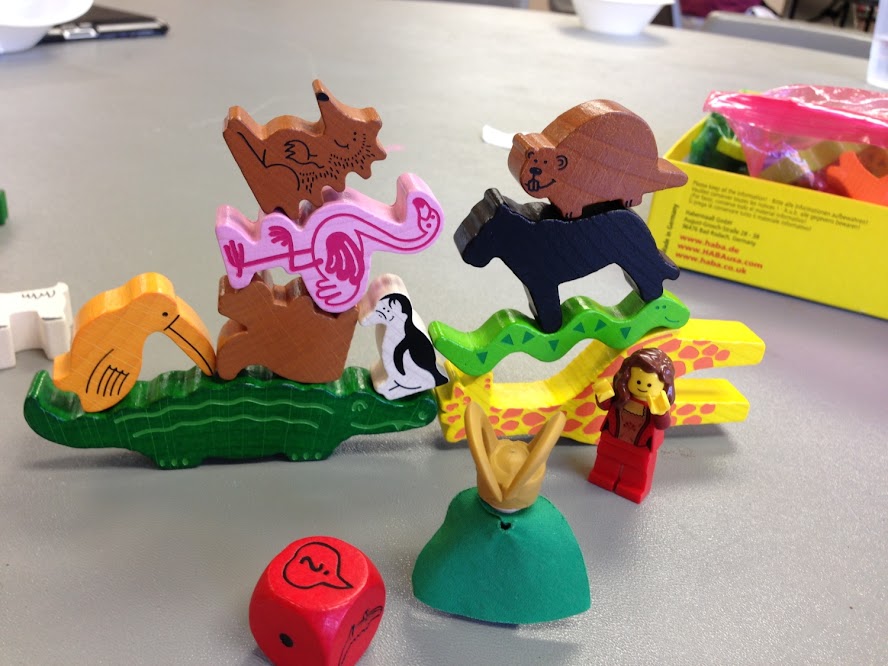 Oh, well done, Precious! My turn again. We are running low on animals, and some of them are real stinkers. 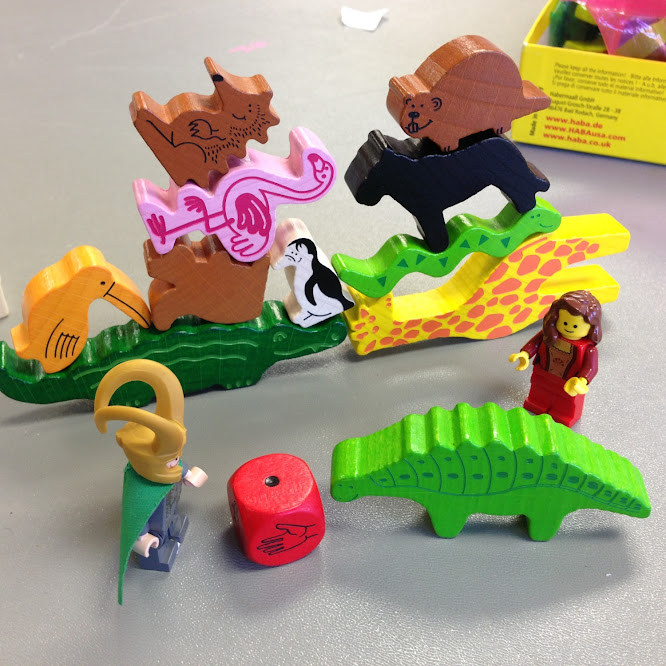 Take this ankylosaurus, for example. No, really. Take it! Do I have any other choice? No, nothing better. Sigh. I’ll just have to see if I can get this heavy thing to balance up there. 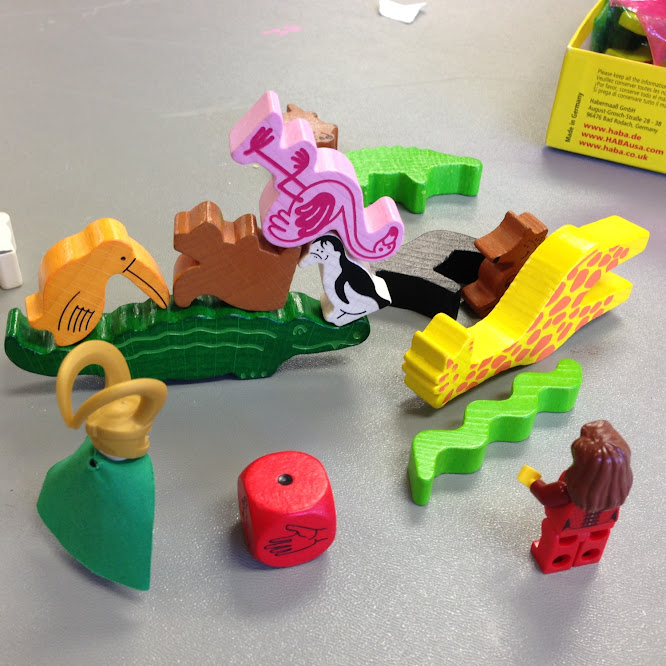 That was… predictable. You win, Sigyn! Well done! It just remains for Sigyn to kiss any boo-boos suffered and thank all the animals for their kind participation.

All of this gaming has given me quite an appetite. Let us go see what the refreshment table has to offer.