I’ve been up to a few things this week, mostly continuations of previous projects. Still, I’ll have to give this one a six just for attention to detail.

1. The work order that keeps on giving: Do you recall the water outage some days back? The one that deprived all of the human female’s workplace of functional bathroom sinks? That bit of mischief is still paying dividends! She submitted a work order. Then the building proctor got involved and– I believe the term is–“chewed her out” for bypassing said proctor’s authority. Then her supervisor took her to task for the same thing. Days later, when she thought the incident was behind her, I had her “randomly” selected to complete a satisfaction survey on the work. Being of a very literal bent, she filled it out candidly, marking off points for communication because, no, she wasn’t kept updated on the work (the proctor was.) I then prompted the King (or something) of the Maintenance Contractors, who called her to inquire about just how his minions had disappointed. When she tried to explain, he delivered yet another dressing-down on the chain of command regarding reporting! Ehehehe! But the fun didn’t end there, because later she received another survey about the selfsame issue! She deleted the email. Two days later, another appeared. She responded to the email (and I quote), “Been there, done that, got the lecture.” No no no, she was told, there is a separate survey for the University’s side of the contractor arrangement and she must do both! It was such fun that I have since arranged for her to be randomly selected for a survey on every transaction she undertakes and a review of every product she purchases. 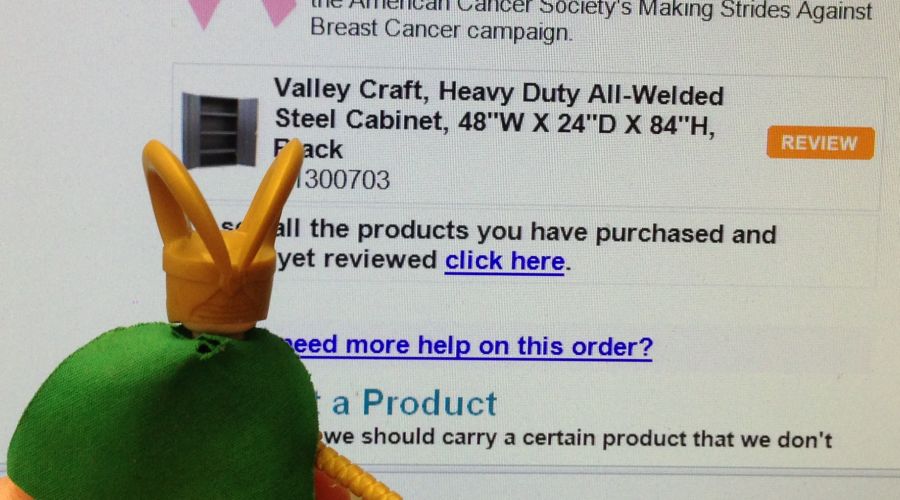 2. And oh, there are so many transactions! The human female has put in the big fall course orders, and it is no secret that I like to play with those. I have reprised some of my best tricks–the quote that is labeled for another university, the vendor who promises to accept a P.O. but who most emphatically does not, the vendor who sends a dunning letter for payment before the goods arrive, the vendor who responds only s-l-o-w-l-y to calls or email, and my personal favorite: the game called “Where Has My ___insert the name of chemical___ Gone Now?” Last year, it was two liters of chloroform. This year I just started at the top of the list and had the acetone on the Extremely Large Chemical order go astray. Vendor Who’s Responsible says they shipped it. Unrepentant Package Squashers have helpfully provided a tracking number which not-so-helpfully reveals that the missing bottles were last seen somewhere in Georgia. Three days ago. They might be delivered soon. Or they might not! The suspense is wonderful! Step up and place your bets! Meanwhile, the rest of the enormous chemical and labware order is coming in–twenty two boxes on one day, eleven the next, another yesterday, more coming! Each little packing slip must be checked, scanned, filed, and a copy sent to accounting, who most assuredly do NOT appreciate that the documents come bearing the human female’s scrawled notes such as “backordered until ???,” “still waiting for the other 1,000 pipette tips,” or the rather cryptic “ship.alt.whse” or “ship.dir.mfr.” That last means that the Vendor is having the hideous stuff shipped directly from the manufacturer because they don’t want to touch it! At last count, there were fourteen pages of slips from four different affiliated sources on just this one order. I always make sure that at least one page is so faint as to be nearly illegible, which causes the department’s accountant to chastise the human female and demand the original and not a scan. Little details are so important. 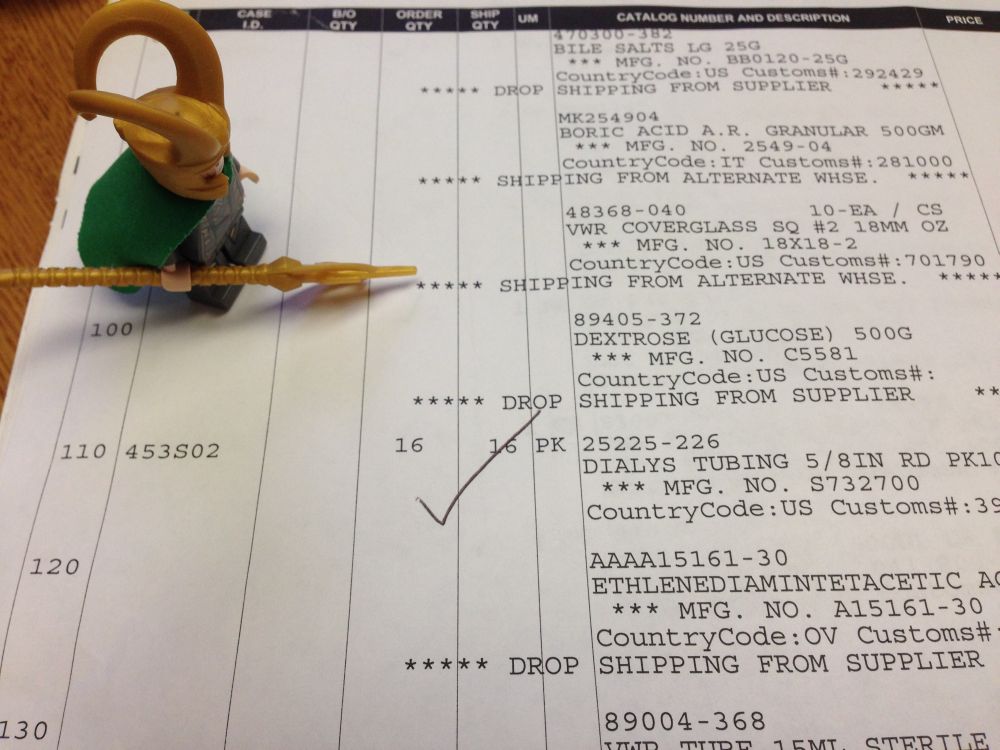 3. A new twist–the scrutiny of the Feds. Apparently the nefarious actions of someone (insert innocent whistle) associated with the human female have caught the attention of the Powers That Be, who now suspect that some sort of drug-manufacturing operation has been set up in a broom closet by the human female and her cronies. Twice–twice!–in the last week, she has had to fill out and sign a form for the Drug Enforcement Administration and swear upon her sainted apple-pie-baking granny’s sweet rosy cheeks that she is not going to use either the malonic acid or the iodine to (gasp!) manufacture barbiturates or other illicit pharmaceuticals and sell them to all her druggie friends. She has jokingly said that she now has an idea of how to provide supplemental monies for purchasing new lab equipment. And now just by typing this and sending the electrons into the air, I have all but guaranteed that her computer is going to be seized, searched, and given to the DEA’s forensic computer specialists and she herself will get to spend some quality time in a small, well-lit room with some nondescript men in sensible suits. Ehehehe! I swear, sometimes all it takes is the merest whisper in the right person’s ear….

4. Things that go bang-whine-clomp and then just go silent for a week at a time. Construction in and around the human female’s workplace continues. I’d say, “continues apace,” but it does no such thing. Instead of finishing the restroom remodel on the first floor before progressing to third, but I convinced the workmen that it would be more efficacious to work on both at once. Or, rather, rip them all out to the piping, tear up the floors, make a mess, and then pause working for days at a stretch. They were instructed that they needed to observe some quiet when classes were in session, which they did for the ten days when no work was done because they were waiting on the tile whose delivery I had, shall we say, had a hand in. They recommenced with the sledgehammers and banging at precisely the moment the Anatomy and Physiology classes immediately adjacent began taking an important exam. They were told to stop. They did. Then they started. They were told to desist, and they did! Until they began again for a third time on the same day. The lab coordinator (who is a friend of the human female’s and who loses no opportunity to disrespect me) was forced to move her two classes to different rooms on two different floors for two weeks while the work proceeds. Except it doesn’t proceed. I am waiting for some groveling from the friend with the smart mouth.

5. Quiz time! Identify what is happening in this photo: 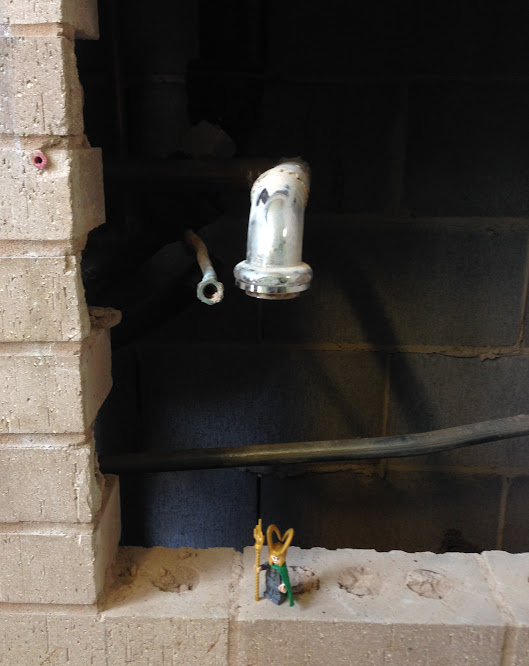 I apologize. That is a trick question. Nothing is happening in this photo! As part of the “improvements” to the human female’s workplace, New! Shiny! Water-fountains! that will Deliver Filtered! Water! at the Touch of a Button! will be installed. To that end, all seven existing fountains were removed. Two weeks ago. I’ll let you decide whether a) I have delayed the arrival of the new fountains so that I can enjoy the grimaces of everyone as they drink tepid tap water*, b) the contractors see the installation of the fountains as the last step of the plumbing updates and much more nothing will happen here until the bathrooms are completed, which, see above, or c) I have done a deal with the company that has the soda concessions for this building, since the tap water here is definitely not tasty**

A Loki’s work is never done.

*True fact:  The city’s water supply is a deep well of slightly brackish, very warm water that emerges from the ground at 108°F.  It has to sit in a chilling tower before it can be considered “cold.”  In the summer, the cooling towers work less efficiently, and the “hot” water that has sat for a while deep in the plumbing is often noticeably cooler than the “cold” water when it first begins to run.  It is a common sight to see someone run the “hot” water tap to get a cool drink or wash fruit.  Not my fault.

**850 ppm soluble salts, most of it sodium.  Not recommended for houseplants or hypertensives.  Murder on lawns, coffeemakers, and plumbing.  Also not my fault.