“The driveway is full of jam.” That sounds a bit like the stupid sentences one is made to translate in foreign-language classes, does it not? They always start out harmlessly enough: “The pen of my aunt is on the table.” “Maria is in the Spanish club.” But they inevitably progress to the absurd: “The wildebeest wishes to purchase a pair of gloves.” “Do not feed sausages to the wallaby.”

The driveway, however, is full of jam.

You see, when the humans moved into this house, there was nothing behind them for miles but woods. When the trees were cut down and the next subdivision was built, the female cried for days. Since then, she has been trying to let the back yard run a little wild to make up for the wanton destruction. (That’s what she calls it, anyway. I think she just skimps on the yard work the neighbors can’t see.). Elm seedlings have been let to grow, a beautyberry planted by the birds has been encouraged, and the wild grape that has clambered up one of the large oaks is running amok in a display of vegetative exuberance usually reserved for kudzu.

Each summer, it produces a crop of grapes faaaar up out of picking range. What the local wildlife does not eat generally just drops. This year, the crop has been quite bountiful and the wildlife less assiduous in gobbling the bounty. A large portion of the vine overhangs the driveway. Viniferous corpses litter the pavement. 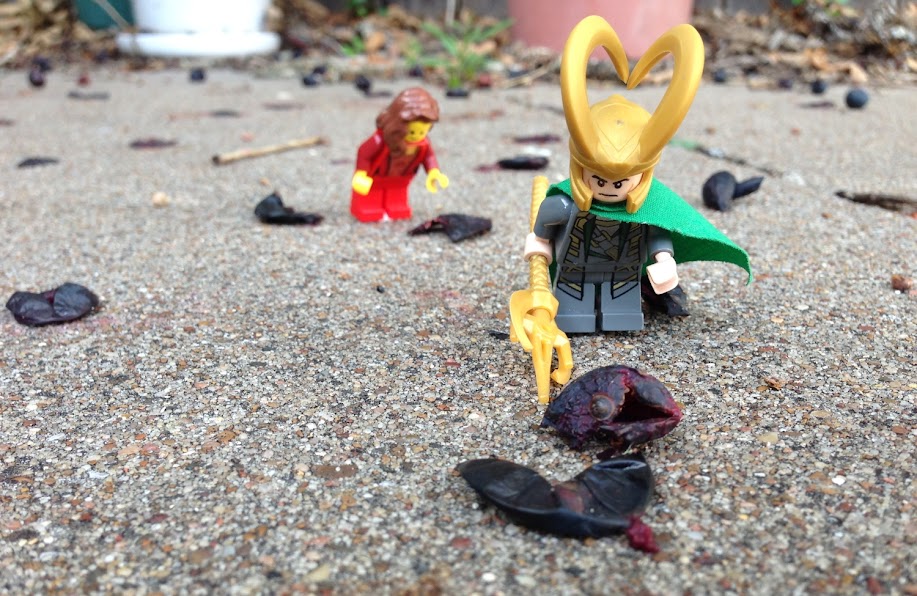 The car turns most of them into jam and the sun turns the rest into little raisins.

What did the grape say when the auto ran over it? Nothing; it just let out a little whine. Badum-tsssh.

Seriously, humans, you should really clean these up. No wonder you have ants! Oh, and while you are at it…

…how about doing a little weeding?

Sigyn and I have managed to find one un-smushed grape and have brought it indoors to wash it and taste it. It certainly looks plump and grapey enough.

I don’t know, though. I have heard that, while the pulp is sweet and juicy, the skin is thick and bitter.