It has come to my attention that some of my admirers may have seen or received only part of today’sMischief Update. Do read the full version below.

I do not know the reason for the malfunction. It’s almost as if someone is waging mischief against me, which is patently absurd.

It’s Thursday, so it must be time to update you on my campaign to make the human female completely gray before her time. Luckily, I am multi-talented and am perfectly capable of directing mayhem while accompanying my sweetie and the pokey bookworm through the library.

1. The water fountain has been installed on the human female’s floor. Which would be a happy prospect for her if it actually dispensed cold water. Cool, yes. Immediately icy, no.

2. After the last time the human female’s home automatic sprinkler system watered the lawn (finally necessary as the rain has quit entirely as if it never meant to ever again), I nudged one of the sprinkler heads up just a bit , so that when she mowed the tall grass last weekend, she partially decapitated it. Whannnng! The soonest the repairman can come is next Monday. She was planning not to let the system run, fearing an expensive and wasteful geyser, but when she thought to turn it off, I distracted her by making the cat holler. When the sprinklers (surprise!) started up at 4:00 this morning, there was no fountain, but there was rather a lot of water shooting madly around in a circle, rather than a civilized quarter-circle arc. It made the most tremendous hissing racket against the window, the downspout of the gutter, the neighbor’s downspout, etc., over and over. She rolled groggily out of bed, threw on pants and shoes, went out to investigate, got soaked, and then blearily re-programmed the system to star over, omitting the offending station. (Which is, of course, the part of the lawn that gets the driest. She will have to haul hoses this weekend–bonus!) The whole show was great fun, and then this morning, she combed the whole house looking for her glasses. She finally found them on the DRYER, in the GARAGE, where she put them when she took them off to peer at the sprinkler control box. Ehehehe! Late for work!

3. Some sort of fake blood that the human female has ordered for the students to use in some experiment or other arrived. As she was opening it to examine it, I jostled her elbow. The left sleeve of her white Oxford shirt now has some lovely indelible pink pinprick spots. Oddly enough, the white bedsheets came out of the laundry with large pink spots of nearly the same color, even though the two were not washed together. Who says housework is boring! I *love* to help with the laundry. Oh, and human? If you want blood, I am adept at producing the real thing… Just not mine.

4. The human female is in the process of hiring a new staff member. I was thoroughly involved in the process. At my instigation, one interviewee regaled the search committee with a story relating to–and I do not jest!–dog turds. Then, when it came time to call the references of the top three candidates, I had my way with the telephone system so that only one third of the parties was ever actually reached.

5. The large fall course order contains the item: 300 boxes of microscope slides, 72 ea. After having the item come up as on indefinite back-order with the Vendor Who’s Responsible (my doing), the human female consulted various vendors and ascertained that the Purveyor of Dead Things had an even better price and ordered some from them. Day before yesterday the Purveyor of Dead Things called and said that, at over 600 lbs, the order would not be deliverable by Unrepentant Package Squashers and would require either splitting up or alternative shipment. Very well. Yesterday, it finally occurred to her to question the assumption that a small box of slides weighs 2 pounds. She weighed one. 0.75 pounds, plus a smidge. The order is straight now, as far as she knows, but watching her do math was amusing. We’ll see what a pile of 300 boxes of slides looks like when it shows up, as SURPRISE–it is back-ordered from this Purveyor also! (I am beginning to suspect it all comes from the same source.)

6. The Purveyor of Dead Things contacted her yesterday to let her know that the sharks, of which she needs 4 males and 4 females quite specifically and which her Ultimate Boss needs to teach his course, are only available in female. Meanwhile, she has heard of another purveyor of dead things, but I’ve removed all trace of them from the web, so she cannot track down alternative sources.

7. Remember the 44 wooden stools which she has been trying to obtain for months now? She had *just* coordinated with that vendor to have them arrive on the same day as the huge order from the Purveyor of Dead Things, so that the business of removing part of the doorway, messing with pallet jacks, and profuse sweating would only happen once. Clever, yes? Well, I put in a few hours at the furniture plant, so that the order was ready early. She got the shipping notice yesterday, put her head in her hands, and called Central Receiving to alert them. Accordingly, she and her staff prepared to receive them early next week, as they are coming by slow truck. Imagine her flusterment when she was informed by Central Receiving that they had arrived at Central Receiving today! Panic! All hands were quickly roused, and at the appointed time, the truck driver came upstairs to hand her the bill of lading for……FIFTEEN PALLETS OF PRESERVED CATS. As much as she wanted a large quantity of stiff, skinned, injected felines, she did not want them quite today, and she did not want fifteen pallets of them! After examining the paperwork the driver carried, it was determined that a) the cats were meant for the School of Veterinary Medicine with which this University is equipped), b) the head of Central Receiving, having been alerted to the in-comingness of a large order and upon seeing dead cats, assumed they were hers, and c) the poor driver was going to have to haul all of the aforementioned cadavers to the other side of campus. Also d) now we know who has cornered the market on dead cats! She was still reeling and laughing from the near miss I engineered when the phone rang. It was someone from Fed-up and Exhausted, notifying her that her stools will be delivered tomorrow. Ehehehehehehe–she doesn’t know whether she’s coming or going!

I may get some more mischief in, as it is only Thursday, but I’d say this has been a banner week. I give it a nine for today and a solid seven overall.

I have nudged my "walking" companions along to the section of the library which features more feelers and fangs and fewer roots and flowers.

Sigyn! Look at this book! All full of great, glittering insects in glorious photographic detail! 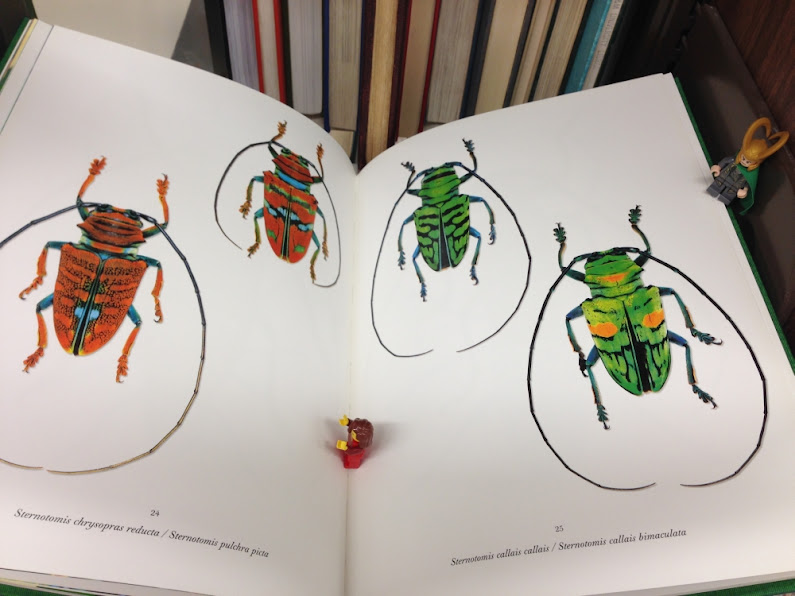 A whole page of red ones for you; a page of green ones for me. Don’t you wish they lived here, and were this big, so I could put one in the human female’s bed? 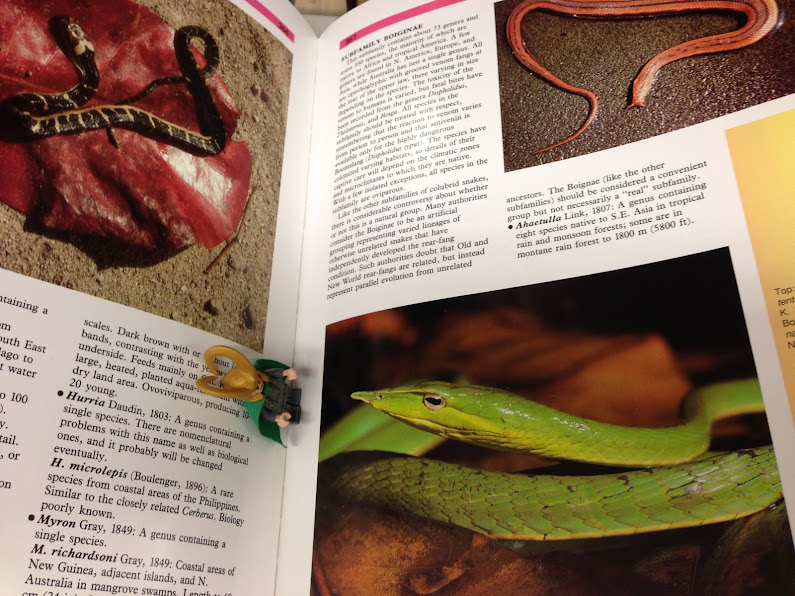 Ehehehehehe! At first I thought the family name was "Boingidae," which would be a very good name for a family of rubber snakes. And oh, I quite like this little fellow. Such a cunning little pointy face. Is it too early to begin making my Yule wish list?