I’ve been remiss in not updating, but my sabotage of the human female’s work life continues unabated.

1. You will recall that she ordered an absurd quantity of microscope slides from the Purveyor of Dead Things. She thought she had the shipping sorted, but I intervened. Five boxes showed up, with a total of 238 smaller boxes inside. (These smaller boxes each hold a silly Midgardian quantity known as “half a gross.” How does that make sense? What’s next–“three-quarters of a slightly disgusting” “Two-thirds of a disturbingly misshapen”?) When she called to inquire about the missing 62 boxes, she was informed that, having begun their journey in Wisconsin, they had made it only as far as Illinois before being smashed by the shipper. No, I’ve no idea how that package-carrier tripped! The Purveyor of Dead Things shipped a replacement fifty boxes, so she had to call and remind them that 50 and 62 are not the same. She was *finally* able to get the last dozen half-gross not too long ago, a quantity known as “half a great gross” or “0.5 cubic dozen.” 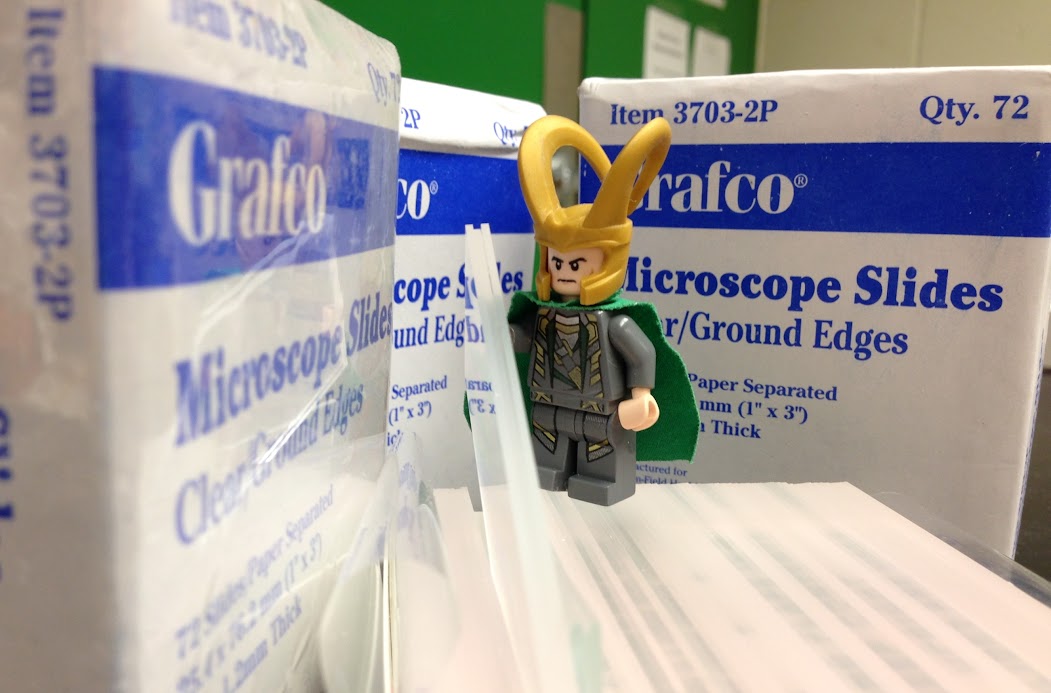 Midgardians have ten digits. Why they insist on counting by twelves is beyond me.

Ooops! These slides have neatly rounded corners, which makes them much nicer to handle than the usual sort. I shall have to make sure that they are discontinued.

2. The forty-four stools finally showed up, minus any packing slip. Here they all are, belly-up, looking like a forest of quadrupedal cadavers. 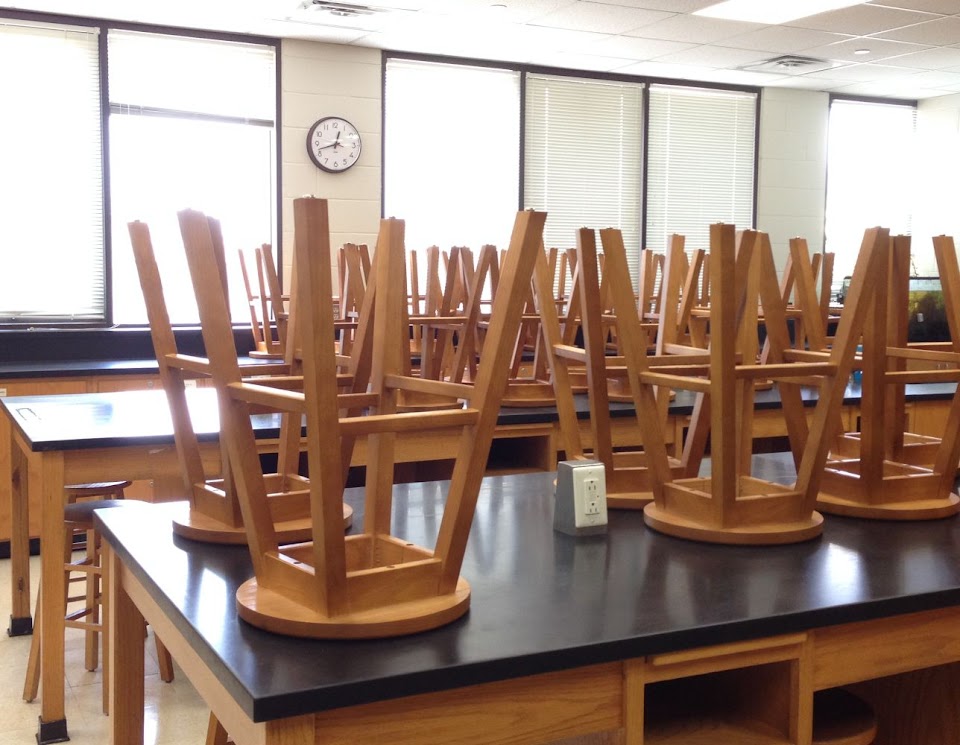 I think I will loosen one leg on each.

3. The fingerprint analysis poster showed up, WITH a packing slip, but a packing slip is not an invoice, so the human female had to call and request one. Turns out that somehow, the original invoice was sent to the College of Architecture… Ehehehehehe!

4. One of the clown fish from the tank in room 321 is just flat missing. Fried fish for everyone!*

5. The enormous order of dead things is finally on its way, entrusted to a semi belonging to Unrepentant Package Squashers. I befuddled the Purveyor of Dead Things a bit and had them tell the human female the wrong delivery date, after she had already scheduled on-campus delivery, doorway modification, and help unloading. Her co-workers nearly had to use the AED on her, so close was she to an actual coronary. Well, they do say that occasional stressing is good for the cardiopulmonary system. She should thank me.

6. The bathrooms on the human female’s floor and on the first floor are still not finished. Work continues off and on. I had them do the ear-splitting masonry-drilling during lab final exams. The toilets are there now, and they probably work, but there’s the tiny matter of there being no doors. Humans are so picky about their privacy!

7. The human female doesn’t have a lot to do with the students, but she occasionally has to deal with some that come wandering into her office area like bemused hoofstock. There was one who showed up expecting a 1.5 hour make-up exam starting after 5:00 p.m. She swore her instructor told her it was all right. (It wasn’t; he said she had to be DONE by 5:00.) The human female, who at 5:30 stops pretending to work and goes home, said no. The same student missed a second make-up opportunity. And then was dinged for plagiarism on a major assignment. None of this is actually my fault, but I do enjoy delaying/distracting/nudging the problem students so that they come through on her watch.

8. I have completely infiltrated the order-fulfillment department of the Squiggly Things Vendor. The last shipment of Planaria (creepy-cute little flatworms with googly “eyes”) was sent two-day air rather than 1-day, and two future shipments were also put down for two day air. The human female caught those and corrected the shipping darn her. She’s getting good at preemptive strikes, so I have taken to messing with the orders in other ways. Take for example, the earthworms that were completely OMITTED from a shipment. She had to arrange an emergency shipment, which was delivered by Fed-up and Exhausted. I met them at the stockroom and told them no one was there to accept the shipment, so the worms went back on the truck, on a blisteringly hot day. Multiple phone calls later, the worms finally arrived, but not before I had Fed-up and Exhausted tell the exasperated human female that they might make it… or they might not.

9. The Vendor Who’s Responsible’s customer service/order fulfillment department is also mine now. I had them tell the human female that the last three items from her brobdingnagian fall order (placed over a month ago) would “ship tomorrow.” A week later, they admitted that they were being shipped from the manufacturer and would still be some time in coming. A further week on, only one has actually arrived.

10. I applied some moisture and some torque to cause two drawers in the main desk of the Room of Doom to stick so badly that they could not be opened. The maintenance folks were summoned. They sent two people to unstick them. They tinkered and billed $200. Afterwards, they (the drawers; I have no idea about the workmen) were still as sticky as sticky can be. A second visit *seems* to have solved the problem, but I’m just biding my time.

11. Somewhere higher up the food chain of the University, each department within the College of Science has had its budget slashed. No explanation, nothing, just “do more with less.” On the other hand, my world-domination/palace-building fund is doing quite nicely, thanks to a recent mysterious influx of cash.

It is rather quiet around here today. Surely there’s some mischief I could be causing. I know! I could mess with the electronic door locks again!

*No, it just turns out that hyenas will eat almost anything.