The humans are all in a tizzy because the new university semester is due to start soon. It means that shopping, dining out, parking, and navigating traffic are all going to become exponentially more difficult as the number of people in town skyrockets. Once classes start up, there’s really no taking a break until Yule. Therefore, they’ve been seized by the notion to take a mini-vacation now, while they can. Their destination is Houston, the large town to the south, where they plan to….wait for it… shop, dine out, navigate in traffic, and rub shoulders with some 2.2 million of their fellow Midgardians.

I didn’t say it was a good notion.

Sigyn and I have come with them. Sigyn, because she likes to poke about in bookstores and museums. I, because I have a few notions of my own about how to make this trip truly memorable, commencing before we even leave home!

We made a late start. For some reason the human female can never find that last thing she needs to pack. I’ve found that if I can hide just the right combination of things, I can have her in such a swivet that she’s tense and sweaty when she sets off instead of cool and relaxed. She’s extra wound-up today because a quarter of the home irrigation system is on the fritz again. (Last time it was a broken sprinkler head. This time I fried a controller. I like to mix it up.) The repairmen were supposed to come yesterday, but they didn’t, so she’s leaving town knowing that she’ll come back to beds full of dead perennials and a scattering of large, pale, crispy spots of lawn-mange. There’s such a thing as Plant Guilt, and she has it bad.


One of the purposes of this trip is to try to find her some long-sleeved shirts, some of the underthings she likes, and some shoes. She likes the little brown dress shoes she has, but I bespelled the hook-and-loop fastener on the left one so that it comes loose at the worst moments, meaning that the strap flaps dementedly and she has to scramble and hobble to do them up again. I have such fun watching her–it would be a shame if she found replacements. In fact, it would be a shame if she found anything on her list, so I made a few phone calls. Thus, the one store certain to have the shirts and underclothes has neither, and the shoe store has several cute options that do not fit. She’s thoroughly discouraged.

That’s a good morning’s work. Time for lunch! The humans are playing that “Where do you want to go?” “I don’t know–where do YOU want to go?” game that irritates me so profoundly. Therefore, I have selected the establishment in which we shall dine. It’s part of a chain, but the humans have not eaten in one.

I have chosen wisely. It is hot, crowded, and very noisy in here. The decor and advertising are rather aggressive. 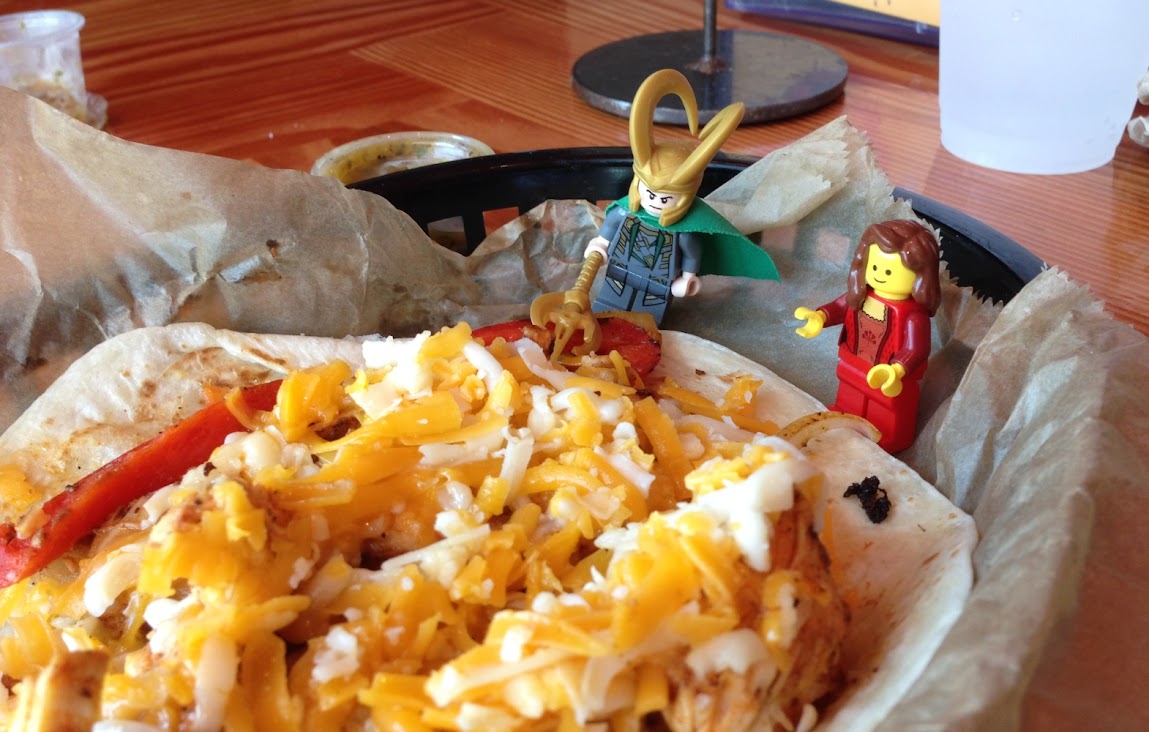 Somewhere under the cheese, peppers, cheese, onions, and cheese, there is grilled chicken and a flat bread of some sort. Even without the “pico” that the human female asked them to omit (she maintains that PICO is an acronym for “Put Icky Cilantro On”), that is quite a lot of lunch. I don’t trust it.

I don’t trust this mascot fellow, either. Just look at him! Horns, a triple-pointed spear, and what is supposed to be a wicked smirk. Clearly, I am being aped. 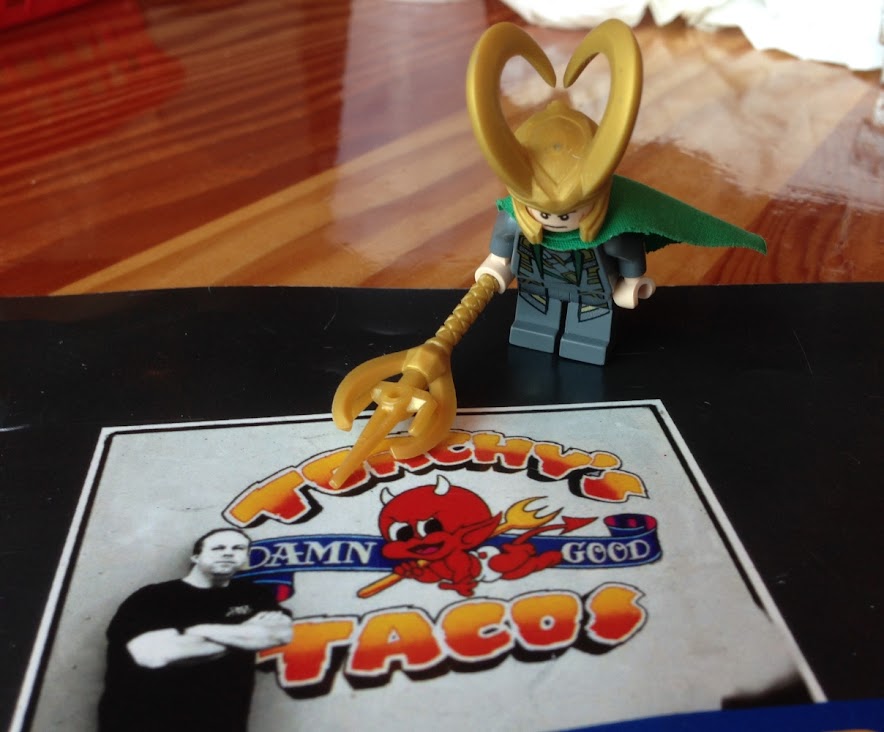 Midgardians have a saying that imitation is the sincerest form of flattery. I find myself not much flattered, since I now know, to my sorrow, how inconvenient having a double can be. Sigyn, you must promise not to like him better than you do me. Even if he IS red.