The mortals are working off their lunch by wandering around, visiting various shops. The male wants to do more fossicking about in the fountain pen store. Odin’s eypatch! Doesn’t he have enough of the things yet?! Sigyn would like to look around there again, but after the mischief I perpetrated last time, I think it’s prudent that I make myself scarce. To amuse myself, I have caused every single parking space in this part of town to contain a car. The humans have been forced to park in a space supposedly reserved for the clientele of another establishment. The human female is thus obliged to remain with the car so that it is not towed away. She is sitting on the curb, reading a book and trying to stay in the narrow strip of shade and out of the broiling sun. (Sweaty twice in one day–I’m on a roll!) She has not noticed yet that I have induced a couple of ants to crawl up inside her pant leg. Figuring it out in…3…2…1…

Yawn… FInally! Here are Sigyn and the male, with another new pen and several inks. Now where are we going? Hmmm. Someplace called Third Planet. This requires some tricky navigation. It is one of those places one can see from the car but can’t actually get to. I have cleverly concealed the driveway, and it isn’t until our second trip around the block that the mortals see past my glamour and find a place to put the car.

What manner of place is this? Oh. I see. It is devoted to the high, noble, Midgardian art forms known as the comic book and the fantasy or science fiction novel. This grotty little shop is full, floor to ceiling and wall to wall, with flimsy books, plastic figurines, and other nerdly wares. Gah! My brother’s stupid Norse face is everywhere. Are my own glorious exploits not to be regarded? I am wounded. I am outraged! I am— 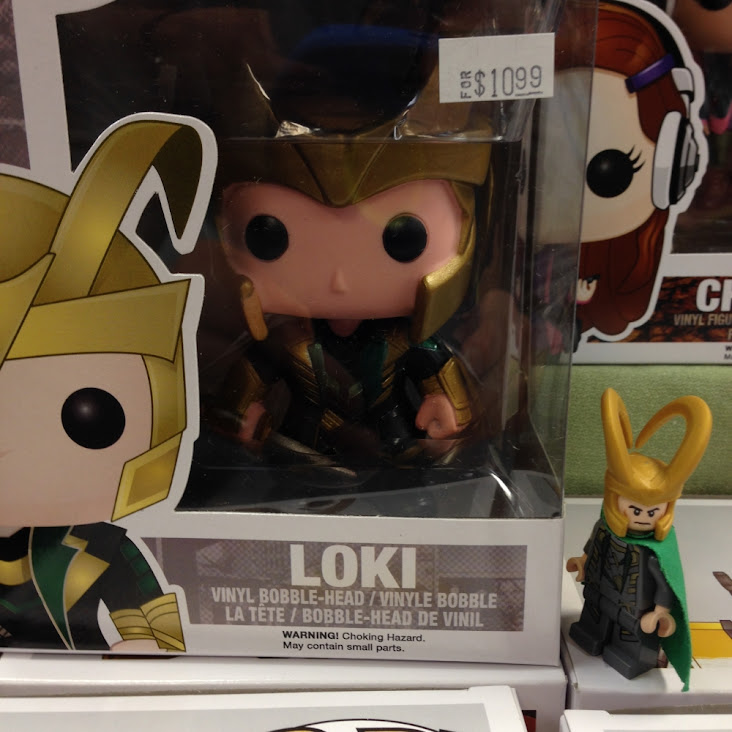 I don’t know what is more infuriating–how utterly ridiculous they have made me look, or the fact that some moron believes that my noble visage is worth a measly $10.99. Human, if you buy it I will smite you so hard…. I do not say “please” often, but please can we get out of here?

More driving, more poking. It is now nearing supper time, and the mortals are once again dithering. They tried to eat at the promising-looking Japanese place which they have passed four times, but ha! It is closed, permanently. I am so ticked off at humans right now that I’d like to travel back in time and close it twice.
A decision has been reached. We are to dine at a place with the dubious moniker of “Fat Bao.” I suppose I should be grateful it’s not “Greasy Bao” or “Indigestion-inducing Bao.” Bleargh.

Oh. Now I comprehend. It’s “Fat” as in “lucky” or “prosperous” and “Bao” as in “soft, pillowy, dough balls of stuffy goodness.” I have met bao before, but these are quite different! They have been patted down, and rather than being stuffed, they seem to be wearing their filling on the outside. Imagine, if you will, the unlikely offspring of a bao and a taco… They should call them FLAT bao! The human female has selected one with chicken, green onions, and pickled carrots, while the human male has opted for fried fish. I am… doubtful, but they do smell appetizing.

To accompany the Flat Bao, the humans have ordered some werid sort of smothered fries. Look, Sigyn, you can scarcely see the potatoes under the bulgogi. Whatever bulgogi is. 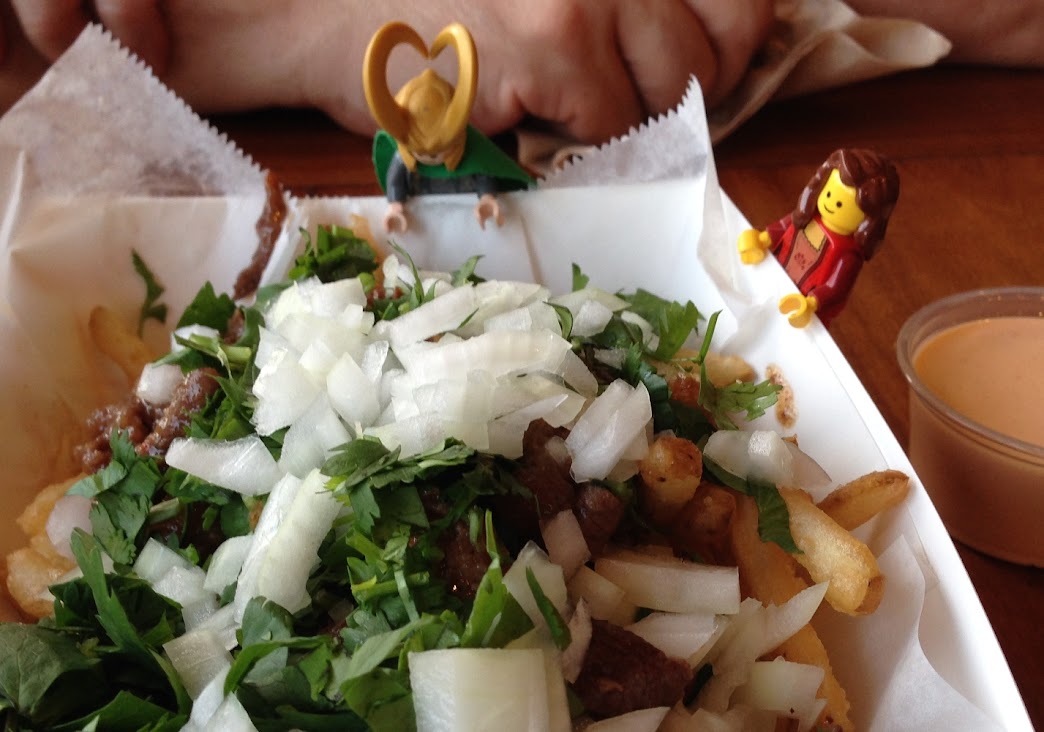 On top of the fries and bulgogi (which turns out to be tasty Korean marinated beefy bits) is a boat load of cilantro and a second boatload of raw onions. Ehehehehe! Watching the human female trying to eat this from the bottom up so as to avoid the despised plant matter is most amusing!

Now that it is the humans rather the food who are stuffed and “fat,” it’s time to poke in one last store. We are back in the same neighborhood as the pen shop, poking in an emporium that specializes in used books, movies, and music. Apparently the human female is seeking to repair some of the damage I did to her precious CD collection, because she’s loading up with with Mozart and Renaissance polyphony. I have no idea where she’s going to put them, though, because the shelf back home is beyond full. She’s a greedy little hoarder, that’s what she is.

*Yawn* It has been a long day and I’m sleepy, but I’ve energy for one last bit of mischief. It’s only now, when the humans are so stuffed they couldn’t even read a menu, let alone eat another bite, that they discover a cute little food truck serving ice cream sandwiched between two big cookies. Oh, too bad! Nothing for it but to waddle back to the inn and hope the mattresses are comfy and the room is quiet…