I know I updated recently, but I’ve just been so busy!

1. We appear to have survived the first week of the semester. I added a few touches, though, like the student whose biology lab schedule said merely, “to be determined.” It’s still not entirely clear where he belongs. The human female thinks he is a transfer student who has to take only the lab portion of the course and not the lecture. It’s hard to tell because he doesn’t actually show on any roster.

2. All the vendor fun has begun in earnest. I had the Purveyor of Squiggly Things, who usually goofs by shipping live materials by 2-day air rather than overnight, finally ship with the correct Fed-up and Exhausted service. On the wrong day. One of their shipments that was mailed properly (after the human female corrected them) arrived sans three jars of Euglena. Personally, I’m of the “what’s a few flagellated microbes more or less?” school, but apparently, in her crazy world, it matters.

3. Sometimes it’s best not to pry too deeply into the why of what she orders. This week, it was–I jest not!–bull semen. Just WHAT is she going to do with that??? She said something about cell structure, blah, blah, blah, but I suspect she’s at work with the Athletic Department to come up with some sort of bovine-human hybrid linebacker. After she placed the order, I had the sales associate call her back to let her know that the liquid nitrogen tank rental was going to be double the price she’d been quoted. Just because.

4. In other cow-related news, she’s had some bovine serum albumin (that’s a thing?) on backorder since forever. It *almost* got shipped, but I tampered with the production facility and that whole batch failed inspection. Ehehehehe. Today she got a notice that a nice, new batch will ship in January 2016 (assuming it passes.) Her freakish experiments can’t wait that long, so she cancelled that order and ordered from the Vendor Who’s Responsible. It’s a lower grade reagent, but since she’s only going to use it to concoct fake urine, it will do. (Seriously! Do you think I make this up?) Just to mess with her head a bit more, I saw to it that the 100g jar was cheaper than the 25g jar. (Who says all my tricks have to be mean?)

5. I bunged up the copier with a sheet of labels inserted properly.

6. I put a typo in an offer letter so that the new lab prep staffer got a 20% raise with just two weeks’ service. And then had it taken back.

7. I convinced the floor custodian that the human female was out to get her, and she quit.

8. Which raises the question–Who will clean the nice, new restrooms? Yes! They are finally finished, and overall they are very nice. If you like taupe. Except they still have no hall doors. Those will be installed over the Thanksgiving break, so that the mortals can all be thankful for privacy. In the meantime, I’ve applied the Loki Touch to all the space-age gizmos. The automatic flushers flush very exuberantly. But on their own schedule. Sometimes it’s, “Um, hello?”, and other times it’s, “Whoa! Meeting has NOT been adjourned!” Yes, friends, using the restrooms is a crapshoot. The motion-sensor sinks deliver a torrent or a trickle as the whim seizes them. My favorite, though, is the automatic towel dispenser. It is like some delicate and shy wild antelope. It must be approached with care and tenderness, from just the right angle. Sudden movements will startle it into immobility. One has to put out one’s hands just so, in a spirit of supplication…holding an offering of alfalfa pellets. I tinkered with the ones in the library as well, since the human female is so often there. Those are of the forced-air variety and proudly proclaim that they can dry hands in 12 seconds vs. the 42 of other brands. They run for 3.

9. Remember the dual half-empty peanut butter jars in the cooling unit? The human female finished one, so the other day I suggested it was time to buy and start another. (This is no simple task because she insists on the ridiculous “old-fashioned” sort that one has to stir and stir and stir to get the floaty oil mixed in with the nutty part. She usually shortens the process by, over a period of several days, turning the jar end for end every time she goes by, letting the oil rise up back and forth. She always ends up with the long-handled spoon, though, goopy to the wrist, having anointed herself and the counters with a spatterment that would have made Jackson Pollock proud.) The brainless wench complied and purchased another, forgetting jar number two. What with the jar of regular smooth peanut butter that the human male keeps for concocting Asian sauces, there are now THREE jars in there!* 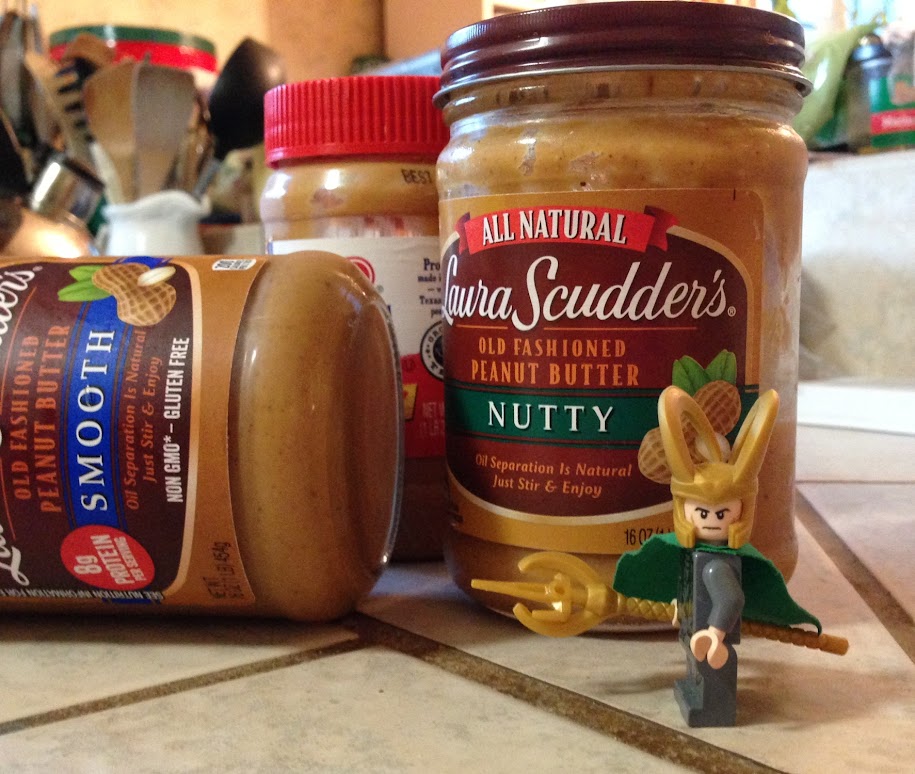 Note, if you will, that the newer jar is smooth, when she really wanted chunky. I do so like to help with the marketing. And this morning, when she took it into her head to take peanut butter and an apple for lunch, I changed one of the partials into a second jar of apricot jam, so she was forced to take the full, new jar. At room temp, it’s really sloppy. She’s eating at her desk. That’s bound to go well.

In other news, the authorities found the radioactive package I had cleverly hidden, so it’s back to square one on that little project. I shall have to redouble my chaos initiatives for next week.

*plus one in the pantry…