It has been some days since I last made note of my progress in driving the human female bonkers.  (“Bonkers.” What a quaint little Midgardian word…  “Bonkers.”  “Bonkers.”  It is fun to say.)  Nonetheless, I have been rather busy meddling with her home and work life.

I’ve seen to it that she hasn’t felt well in going on two weeks.  Nothing could be simpler.  All it really takes is urging her to stay up a bit too late, sit without stretching for a little too long, eat that one extra cookie, over and over.  Then the medicine for one malady leads to some other megrim in an endless merry round, and so on.  She likes to think she’s the epitome of long-suffering and quiet fortitude in the face of adversity, but truthfully?  She whines.   And all of us–the human male, Sigyn, me, and the cat–  are most heartily sick of her coughing.

I did have a little fun with one of her routine medical appointments.  I changed the date on all her calendars, with the end result that she showed up a whole day early and felt good and stupid.  The kind people at the doctor’s office were able to fit her in, which led to her feeling grovelingly grateful as well as clueless.  Then I let her get a peek at the test results, just enough for her to be sure she was dying of something dreadful, right up until they told her she was physically just fine.  Her mental condition…well…

I’ve been disrupting the Flash settings on her computers about once a week.  Watching her machine seize up in the middle of something complex never fails to amuse.

I caused the ceiling-mounted projector in the Room of Doom to overheat.  It’s an LED projector.  It shouldn’t be able to do that.  When will she learn that I and my magic are not subject to the laws of Midgardian physics?

I have continued to joggle elbows and startle students in the lab.  She has filed more accident reports this semester than in the previous six combined.  In one mishap, henceforth known as the Great Purpling, three students at once learned Why We Do Not Pick Up Dropper Bottles of Gram’s Crystal Violet by the Dropper.

The Purveyor of Squiggly Things was doing too good a job getting the squigglies to the human female in the appropriate manner, so this week, I arranged for two-thirds of the order to show up one day too early.  The remaining wormy bits and pieces were only saved for shipping on the proper day because the shipping clerk thought they were out of stock when she sent the others zipping on ahead.

The university’s key shop, charged with the task of duplicating some cabinet keys (Rats! I was planning to hide the only copies!) has unilaterally decided that the account number the human female uses for all purchases both foreign and domestic is invalid.  No keys for you!

The invertebrates in all of the aquaria have embarked upon an ambitious program of eating one another at an alarming rate.  On today’s menu: sponge, scallop, sea star, coral, anemone, and jellyfish.  Bad urchin!  No biscuit!

And finally, my favorite bit of recent mischief:  A rousing game of Who’s Got the Bulb?  There are many devices in the human female’s workplace which rely on light bulbs or lamps of some sort or another.  Each device has its own peculiar requirements, and it is not uncommon for the techs to bring in a failed bulb and ask for more to be obtained.  What usually follows is a long process of searching the appliance for a manufacturer and model number, searching for the the correct owner’s manual, searching the manual for the part number, and then searching countless websites and catalogs for the bulb in question. While Midgardian bulbs are often helpfully labelled with their wattage and some sort of arcane code which describes their shape and base configuration, it is not uncommon for each individual vendor to list them under its own product number or inventory code.  It’s not unlike the other game Midgardians hate to play–Hunt the Stench.  Something is rotten somewhere, but it takes all one’s powers of deduction to suss out the problem and solve it. 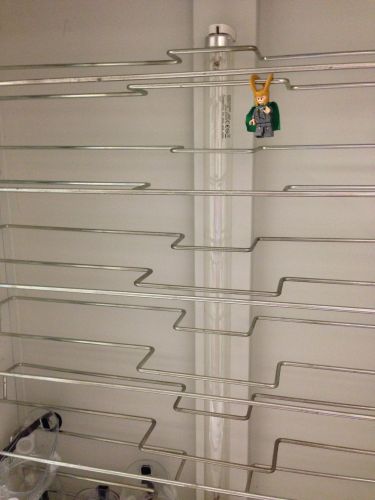 This is the interior of a metal cabinet used to sterilize lab equipment via exposure to strong ultraviolet light.  (The human female’s techs use it to de-cootify loaned lab goggles.)  Note the long, vertical bulb at the back.  It is old.  It is faltering.  It must and shall be replaced!  Thus, the fun:

This cabinet was constructed by EMD, which is now owned by Fisher.  Consulting the parts list inside the cabinet turns up the Fisher part number.  Which is not, of course, the same number as is printed on the bulb by its manufacturer somewhere on the other side of the planet.  Contacting Fisher gets the human female transferred from one division of Fisher to another, from Education to Science to Medical.  (Fisher, like Volstagg, has swallowed many smaller entities.) Ultimately, it is vouchsafed that the cabinet is no longer being made and that Fisher no longer carries replacement parts.  But fear not!  A well-known bulb emporium probably stocks it.  Contacting the Bulb Moguls confirms that, yes!  It can be ordered!  Just specify [third part number identifier]! Victory! Information is exchanged, and Helpful Support Person promises to check actual availability and pricing and send the purchasing information.  But she doesn’t.  When the human female calls back, Helpful Support Person has to be goaded to recall the previous conversation.  When she does, she raises the heretofore undisclosed requirement that the bulbs may only be purchased in quantities of ten.   But fret not!  A check of the database reveals that Fisher buys these from the Bulb Moguls on a regular basis–surely Fisher can sell the human female one!  Just ask for [fourth part number identifier.]

This completes one full circuit of futility.  By this point, the human’s left eye is beginning to twitch and she has resorted to stapling all her notes together and numbering the steps in sequence, navigating her way through the chartless sea that is order fulfillment.   She calls Fisher again.  Is transferred again. “Oh, we’re Education.  You probably want Medical.”  At long last, she reaches someone who says yes, she can order the bulb.  Yes, she can order only one or two.  Yes, she is looking at it on the screen at this very moment.  Oh, but wait.  It says here it’s a G13 and not a G20…  So this isn’t it– Or is it?   Measurements are measured.  Heads are put together.  Well, it’s x in diameter and y in length and has n number of pins, so probably, yes, this is the Mjolnir, the Idunn’s Apple, the Tarnhelm of Lightbulbs.  And all the valiant shall enter Valhalla rejoicing!  Of course, it’s more than twice as much per bulb as it was from the Bulb Moguls, but by now the human female doesn’t care!  Rather than try to figure out which division of Fisher needs to be referenced in the byzantine purchasing software she is constrained to use and possibly go astray yet again, the human female throws caution to the winds and uses a credit card to order the bulbs that very damn minute.  Valkyries sing!

(But recall that Fisher is sourcing them from Bulb Moguls, so they’re on backorder.)