I like my new green fountain pen well enough and would happily call a halt to the search for whatever ill-defined ne plus ultra of pendom the humans are seeking, but No!  There must be MORE PENS!  MORE INK!  Somewhere there awaits an ink or a nib they have not tried and there is no rest for anyone until totality is reached.

Thus Sigyn and I find ourselves whisked away (well, as whisk-y as the traffic will allow, which isn’t very) to the Pen Emporium in the Big City to the South.  *Yawn.*  Old news, mortals.

The human female is taking the opportunity to try out the Namiki Falcon Fine Soft nib she thinks might work well with her handwriting. 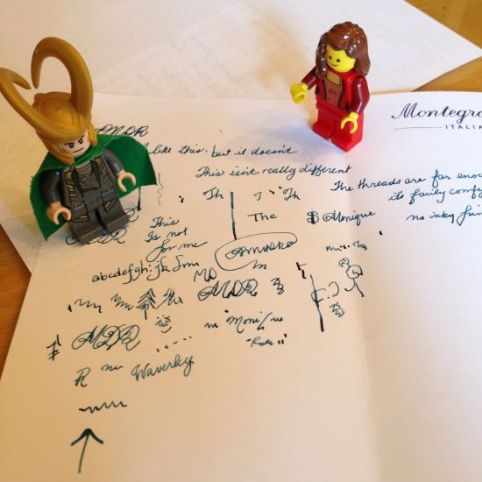 Look at that hieroglyphic mess!  Flamingos?  Really?  Turns out that while it feels quite nice to write with, it really doesn’t flex as much as she hoped, and it doesn’t miraculously give her perfect penmanship.  I could have predicted that.

The next nib is a clever little one that is adjustable from stiff to soft.  Let us see what that produces. 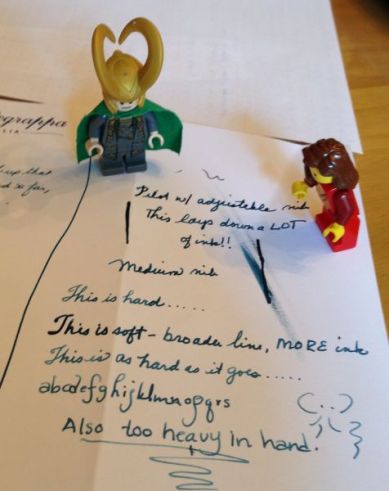 Blots, mostly.  Oh, well. It was worth a try, I suppose.  And while we are examining the results, what color would you say that ink is, hmm?  It is called Noodler’s Texas Blue Steel (I am not making this up!) The female maintains it is a dark teal.  The male says it is a steel blue with no green at all.  Greenish!  Blue!  Greenish!  No green!  Ehehehehehe!  This is marvelous–I think they may actually come to blows!

Rats! The humans are moving on to testing every other ink they can find. 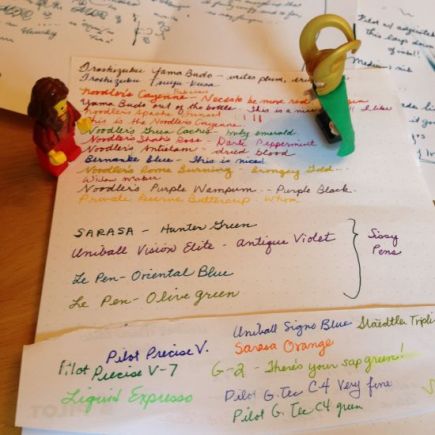 Great Frigga’s corset!  What possible use could one have for that screaming yellow?  The Rome Burning is an intriguing shade, and I quite like the Antietam (looks like dried blood), but where are all the good greens?

While the male continues to try every. single. tester. bottle. ever, the female has wandered over to look at the pre-filled gel pens.  Given her inability to write with a fountain pen without besmearing herself and her surroundings utterly… 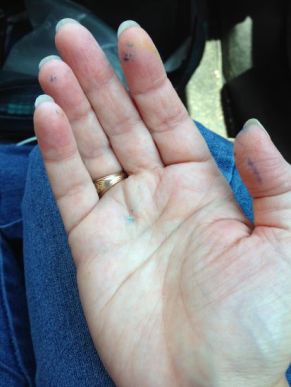 …this is probably wise.  (The above was AFTER washing.) You can see some of the ones she’s tested toward the bottom of the photo above.  After a LOT of dithering, she has picked out two greens, a teal, and a purple.  (It is purple, woman.  No amount of you calling it “Antique Violet” will keep it from being a purple pen.)

Sigyn is using the gel pens to draw a little violet or something. 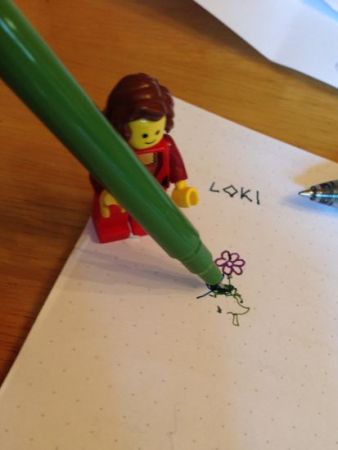 Not bad for using her non-dominant hand, though you can see her coloring wobbled a little.  Sigyn, may I try the dark green one? 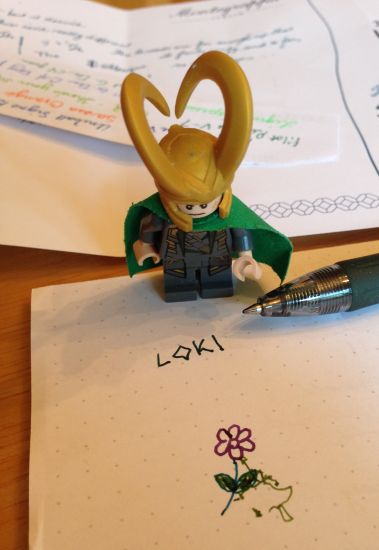 Oh, that will do quite well, when my fountain pen isn’t handy.  I shall mark where the human female puts it and purloin it at the earliest opportunity.

The male has just examined (at the female’s behest) a bottle of something called King Philip’s Requiem.  King Philip’s Revenge would be a more apt name!  Ehehehe!  It is a most violent shade of magenta-fuchsia, and the over-filled bottle has dribbled ink everywhere, much in the manner of the dreaded pink stain in that famous Midgardian children’s book about the cake-eating feline.  I do not know what heinous crime the ghost of King Philip is avenging, but his retribution is indeed terrible to behold.  While everyone else cleans up, Sigyn and I will enjoy this pastel repast which the proprietor has set out for valued customers such as ourselves. 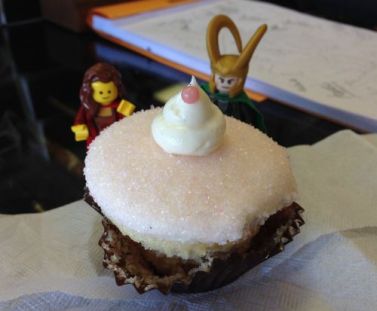 Ehehehe!  Oh, no!  Ehehehehehe!  The human male has actually purchased the magenta ink!  It was the last of its kind, a tester bottle, and the proprietor opened it to see how much remained, so as to set a price upon it.  I distracted him and he did not secure the lid properly afterwards. The check-out clerk, the clerk’s computer mouse, and the check-out counter have now all been liberally anointed, and the Revenge continues to spread. Sometimes these mortals make it just too easy.