The humans, not being fans of the eleven- to thirteen-hour car ride between here and the human female’s mother’s town, decided to split the return journey in two, stopping over in a small-but-relentlessly-historic-and-peppy town.  It was named for Frederick Someone-or-Other.  I do not know what he did to deserve it, but it doesn’t matter, because he (not being a god, like me) is long dead.  When I come to rule all of Midgard, I will rename it for Sigyn, anyway.

The town has already decorated for Yule.  It was cold and a bit misty, but Sigyn and I went down to the park on Main Street to look at the lights. 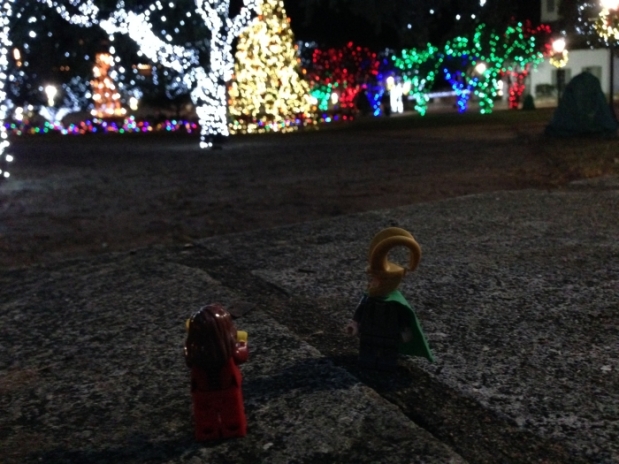 I must admit it was very pretty.  Sigyn says Yule lights are very romantic.  I am not so sure.

I rather felt as if I were about to have to answer a spate of harsh, rapid0-fire questions.  I suspect that the old-fashioned lights had a kinder, gentler glow than the new ones.

The green ones, sad to say, do nothing for one’s complexion.

The next day, the humans did what the female calls “poking in shops,” which is what I call “buying presents for everyone but Loki.”  Books for small people, colorful socks for a grownup, and some unusual edibles for various personages that weren’t me.

This shop had taster jars of various nummables out.  Sigyn was brave enough to try the hot pepper jelly, but she liked the cinnamon honey butter better.  More gifts for other people were purchased.

All in all, an unfair distribution of presents, and I will punish the human female accordingly…