The days are so short now.  I can scarcely manage to fit in all the mischief I need to get done.  In fact, some days I’m working long past daylight.  Take the other evening, for example, when the humans noticed that their automobile was making an odd thump-thump-thump noise as they were driving off campus.  They pulled over to check the tires and found something very large protruding from one of them.  I watched in silent mirth as they tried to figure out what little present I’d left in their parking space and as they struggled to remove the damaged tire and mount the itty-bitty spare in the dark.  (Truly, they should thank me, since I waited until they were not on some remote West-Texas highway in the cold and dark.  I keep trying to remind them that, as much as I pick on them, it could always be worse.)

In any case, this is what they removed from the tire. 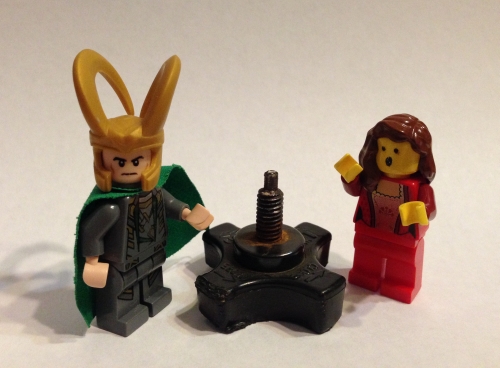 Do you know what it is?  I don’t either!  It says “Open” and “Close” and has arrows, so clearly it is meant to open and close something, but what?  Doesn’t matter.  It is pointy and sharp and distinctly caltroppish, which is all I needed.

The humans are extra-frazzled at work these days.  Both are working on revamping their department’s website.  I like to sit by the female’s elbow and distract her just as she ought to be hitting “save” on the page-making software’s development interface.  Between that and surreptitiously deleting tiny things like closing tag brackets so that table formatting is completely lost, I figure I have just about doubled the length of time it is taking her to create the various pages.  Progress!

Remember the most recent bulb morass?  The human female was asked to complete a customer service satisfaction survey about the transaction.  Do you know what the brazen besom did?  She sent them links to my blog posts about the whole ordeal!  I made sure someone called her back to speak about the fiasco, and what do you suppose she got for her troubles?  A coupon for a future order?  A free spare bulb?  Sympathy?  Ehehehehe!  Nope.  Just an “Oh, we’re sorry.” Now she wants to complete a satisfaction survey on the customer service satisfaction survey…  I figure I can loop this through one more iteration before she loses hope completely.

But mostly, am beyond proud to say that I have finally revealed one of my super-secret long-term projects.  Not just the humans’ department, but the entire University System (all campuses and offices and affiliates, state wide) is now forced to use a special new purchasing software package.  No longer do the human female and all her coworkers just have to contend with the Purveyor of Dead Things and all the other vendors.  No!  Ehehehehehe!  The new software (let us call it BAMN) is a perfection of clumsy, bug-ridden, obfuscatory, redundant, bad programming that has purchasers, approvers, reconcilers, and the BAMN support staff lamenting loud and at length to anyone who will listen.  I have designed it to randomly spit users out of the program from time to time.  Menus and screens change from day to day.  Clicky-boxes go nowhere.  Some functions have two tabs, only one of which will take you where you want to go–and I’m not telling which!  Error messages appear as a standard feature, even when there is no actual error.  Users’ mailboxes fill up with every system message meant for any user anywhere.  Each requisition generates at least four e-mails, most of which say cryptic things like, “Your confirmed PO has passed approval and has been sent for approval.  **DIRECT OPEN MARKET PURCHASES DO NOT REQUIRE APPROVAL**”  (I’m very proud of that one.)  All the POs are visibile to anyone.  Only a few of the punch-outs to vendor catalogs are complete  (the giant Vendor Who’s Responsible is not one of them!) and the ones that are, don’t work.  *Every* line item requires a commodity code and, while I have included codes for items such as cotton candy machine makers and radioactive material handling equipment, there aren’t any codes for useful lab items like glassware or biology items like preserved animals or live microbes.  Bovine semen?  Ehehehehe!  No, again.

So far the human female has put three purchase orders through the new system.  Two required help from the BAMN  IT folks, who have already acquired the moniker “BAMMIT”.)    One order was sent to a vendor e-mail address at the Supplier of Squiggly Things that hasn’t been valid for years, despite the fact that the vendor was added just last week at the human female’s especial request.  Another order is in a holding pattern until the Purveyor of Dead Things files a new W-9 form, never mind that the one on file with the previous purchasing software was good as of last week.  This bit of mischief is going to provide hours and hours of fun (for me) for months to come.  We’re on version 13 and going nowhere fast! And while the humans rant and kick the furniture, I can get some good work done on other things.

The human female’s building’s restrooms, which were supposed to be fitted with hall doors over the Eating Holiday break, are still wide open for public inspection.  Perhaps, if the humans are all very good, I may nudge someone to give them doors for Yule.  But probably not.

Speaking of the upcoming holiday, the humans have shifted into Preparation Mode.  This involves yet more late nights, lots of lists, the stockpiling of baking supplies, and the crafting of gift items.  The human female has been doing incomprehensible things with felt and thread and beads.  Under my coaching, the feline has taken up position In the Big Middle, which results in shoving, spilt beads, and hurt feelings on all sides.

Don’t tell me that isn’t festive!