I’m rethinking keeping the planner.  It might be more useful to let the human female have it. 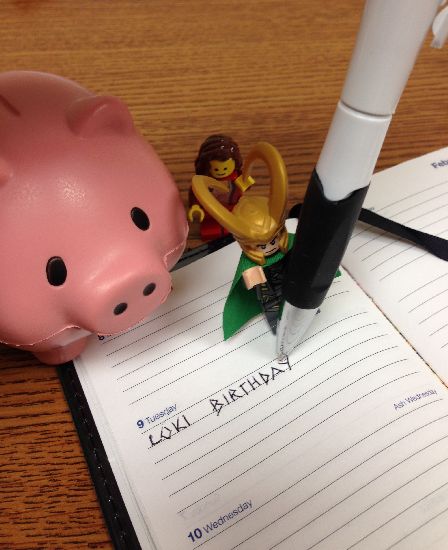 We still haven’t reached the end of the SWAG.  Inside the ugly green bag is a soft canvas tote bag emblazoned with a friendly sheep.  Sigyn is smitten.

There’s something else soft and cloth-y down there, too.  I think it… Yes, it’s a T-shirt.  Size Enormous, just right for the human female.  Sigyn is trying to imitate the Science Ninjas on the front. 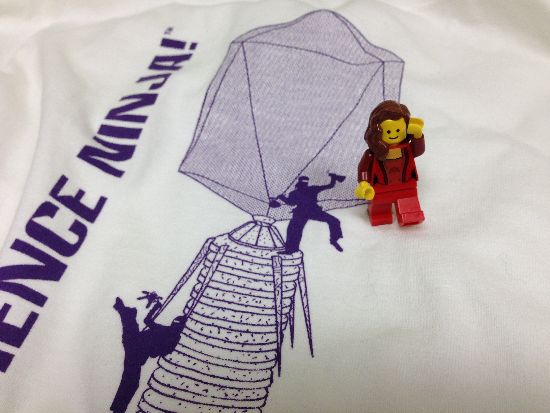 Hold on–There’s something rustling around right down at the very bottom!  Something alive! 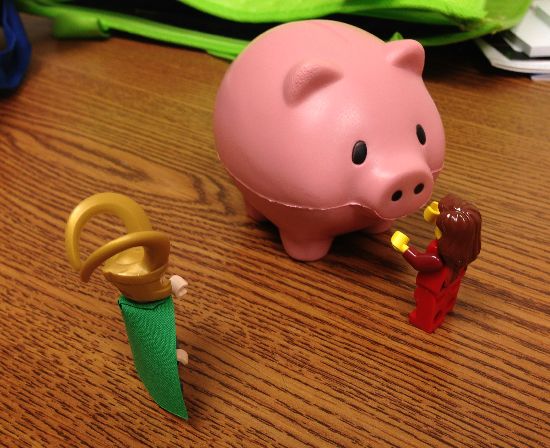 You kiss ME with that mouth!  Eewwww…

That’s it.  I think we’re done with SWAG here.  Let’s stuff all the junky literature back into the hideous tote and carry off our booty. 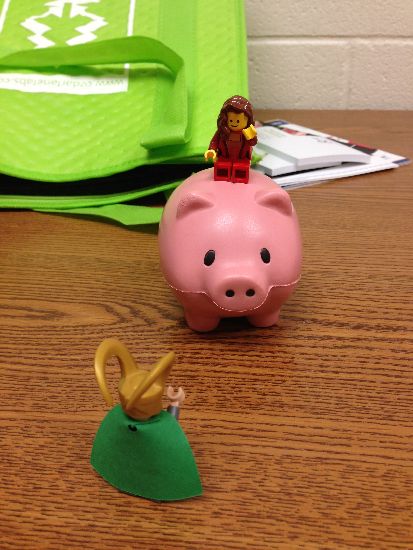 One never really knows what the vendors are going to be handing out as SWAG.

Look at this, Sigyn! 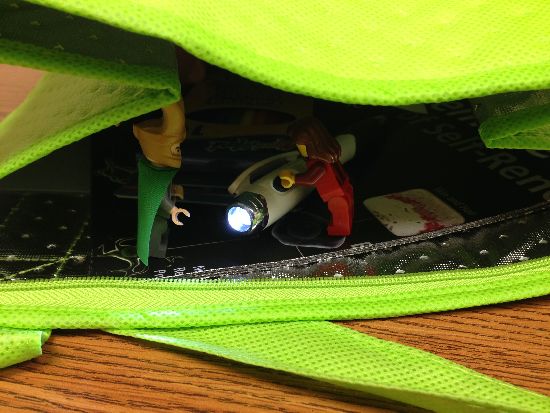 This pen has a little light!  We can use it for reading in bed and harassing the feline!

And this ruler could be very useful too.  Hold your cute little foot up, and let’s see what size shoe you take. 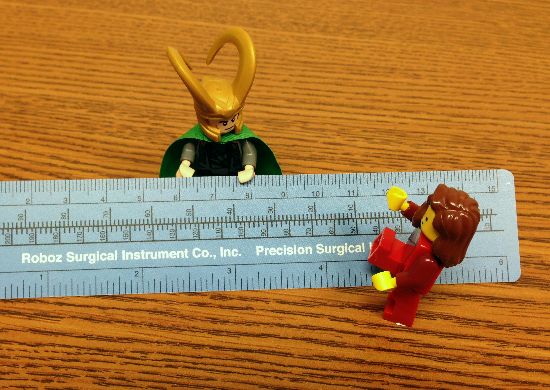 Some SWAG items are more fun than others. 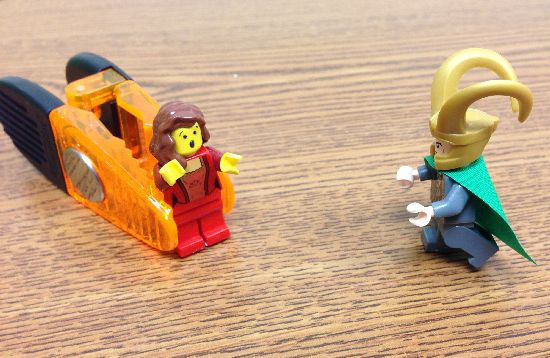 Here, Sigyn, these won’t hurt you. 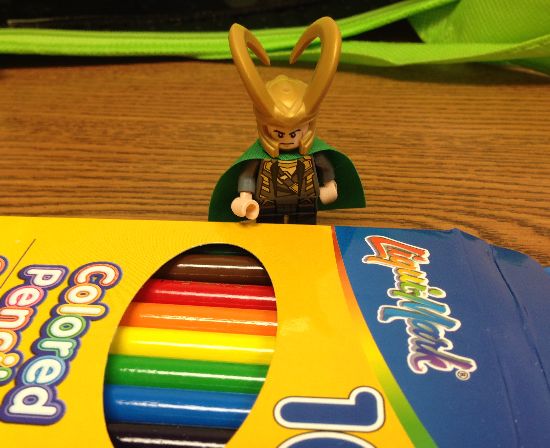 Sigyn, of course, has a favorite.

I heard the human female say the colored pencils were a door prize.  Presumably that means the show coordinators thrust them at her as they shoved her out the door.  Probably worth giving away good stuff just to see her leave.

The human female is hoping that there will be office supplies amongst the SWAG.  Notepads are always welcome.

Oh, look!  Here’s a very nice planner!  Even though nearly a whole month is gone, I can still put this to good use.  A world-conquering supervillain can never be too organized. 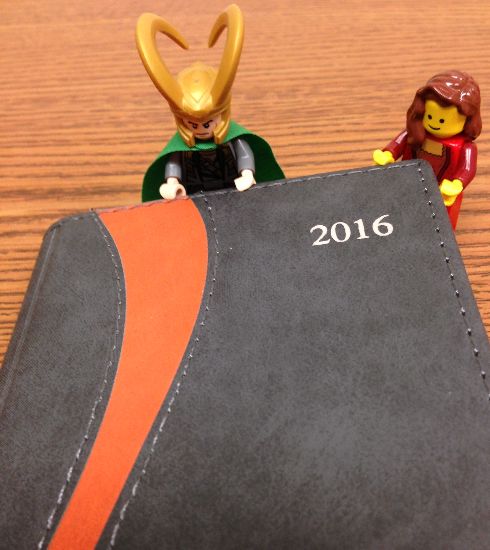 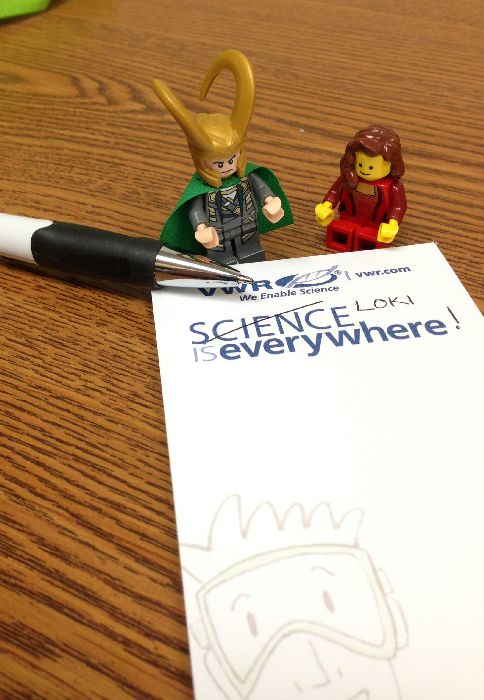 And don’t you forget it!

From time to time the human female goes to one of the Scientific Products shows that are held on campus.  Theoretically, it’s so she can go and look at products that might be useful in the teaching labs or talk to the vendors and try to arrange a good price for chemicals or labware that she needs.  But I know better:  These shows usually have free food, which she is genetically incapable of passing up. Also, the vendor booths hand out little free things.  Collectively, this is called “SWAG”  The human female will stand and talk with purveyors of multi-thousand-dollar microscopes and animal-anaesthesia systems and whatnot, knowing full well she will never buy anything from them, just hoping they are handing out superior trinkets.  I think therefore, that “SWAG” might also be an acronym:  Stuff We Aren’t Getting, or perhaps Schmooze While Actually Greedy.

Today the human female has returned with quite a haul, all loaded into this handy-but-garish insulated bag. 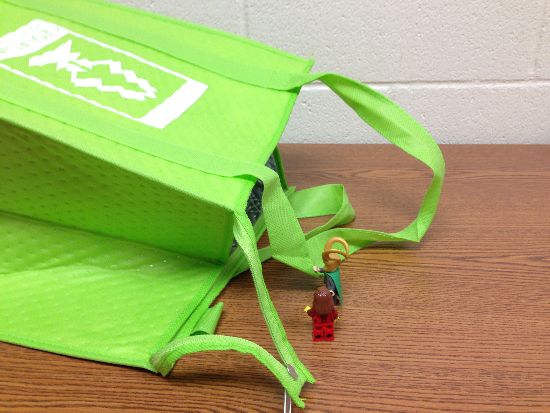 She has left it unattended whilst eating her lunch (Really?  She has room for lunch after inhaling a buffet’s worth of cookies, fruit, pizza, and bagels?)  Sigyn, let us examine the contents more closely.

There seems to be a vast quantity of paper inside.

Hmm.  A coupon for a company which deals in gold.  She is just going to squander this, so I think I’ll take it.  I could use some more gold. 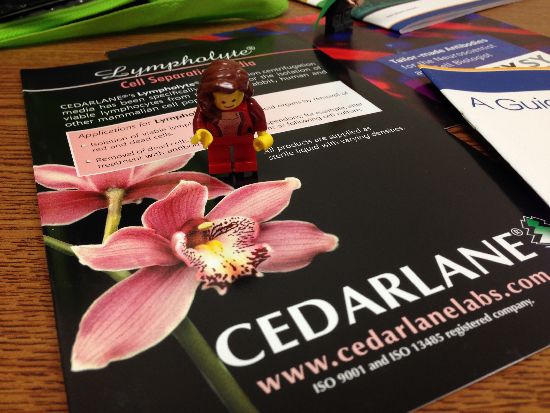 Sigyn is going to be disappointed when she learns that this company does not actually sell orchids. 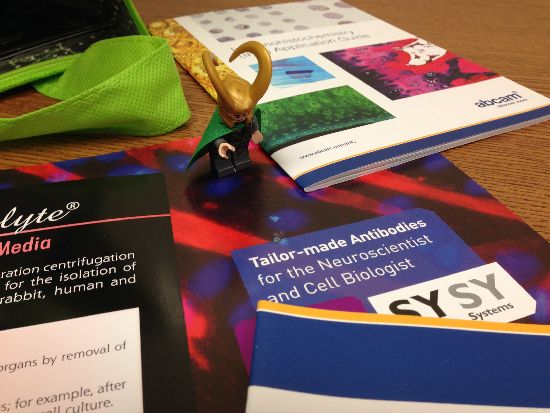 More brochures, all for products she will probably never buy.  Although I might contact this outfit to see if they can produce antibodies that will render me proof against the epidemic of election year rhetoric, by which I find myself increasingly sickened…

Do you recall the round baked things the human female made a while back?  She stuffed one of them with bacon and cheese (which was delectable), and the other was full of brown sugar, cinnamon, and orange peel.  She froze that one, hoping I’d forget about it, so she could eat it all herself.

The other day she trotted it out, let it thaw, warmed it up, and drenched it almond glaze.  It looked positively scrumptious.  Then she put on some slivered almonds and it looked even better.

Then she had to go and ruin it with some of those abominations that the Midgardians call merry-shino cherries.  (I suppose because they’re supposed to make people happy.)

They don’t make ME happy, so she has no business putting them on anything destined to come anywhere near me. Bleargh-shudder-bleargh!  Too sweet!  Too sweet!!  Cherries are for eating out of hand or for pie, woman, not for dousing in syrup and red dye.  On Asgard–Hel, even on Jotunheim!–we do not torture stone fruit in such a barbaric manner.  How did you people ever learn to walk upright and stop eating mud?

Sigyn, of course, thinks they’re “nummy” and was only too happy to eat mine as well as hers.  Then again, we all know she has a thing for cherries…

The human female has been a busy little bee, going through the closet and all her drawers, sorting out her wardrobe.  There are all the garments she loves and wears regularly (boring), the items she’d like to wear but can’t get into anymore (*cough* toomanycookies *cough*), the things she’d wear if they were mended (#lazy), a few things that are so worn they are fit only for the rubbish (this category overlaps with the favorites to no small degree), and the clothes she wants to donate to a charity.  (I don’t think the poor are going to want some of them!)

The mending pile is huge. (I may have helped pop a few seams and wrench off a few buttons…)   The give-away pile is even bigger!

Hmm. Now that I think about it… My old cloak is looking rather shabby.  Frayed around the edges, and there’s that white stain that Sigyn hasn’t been able to get out…

I could donate tha—   Wait.  What am I thinking?!  Loki, God of Greedy Mischief, does not give anything away!  Nope.  I’m keeping this old cloak for all the sweaty, muddy, prickly rambles the human female drags me on.  The poor will just have to find their own green cloaks.

I have come to the conclusion that Midgardians are just pack-rats who have learned to talk and drive automobiles.  They never throw away anything.  (It’s not that way in Asgard. You’d think that a race whose lifespan runs to millennia would accumulate a plethora of worldly goods, but it’s not so.  Asgardians live long enough to learn that things are not important, so the whole planet has an elegant, uncluttered air.  Except for Thor’s room.  That place is a pig sty.)

But seriously, humans hang onto everything, and the more they paid for it, the more they dig in their heels and refuse to part with the tiniest particle of it.

Case in point:  Behind the large, barny building that houses the plant collection the human female works in, there is an amazing accumulation.  Years ago, the mortals in this realm essayed to build an atom-smasher. They purchased the land, cleared the giant ring track, and commenced assembly.  Sadly, the project fizzled, and for some strange reason, all the bits and oddments ended up here at the University.

It has all been joined by cast-offs from various sciencey departments on campus.  Through the years, the scraps and apparatus (scrapparatus?) has been pretty thoroughly picked over. What remains is in pretty sad shape.   Just look at that big, white, badly broken…thing.

Whatever it is, I’d like to go on record as saying it wasn’t me who broke it. 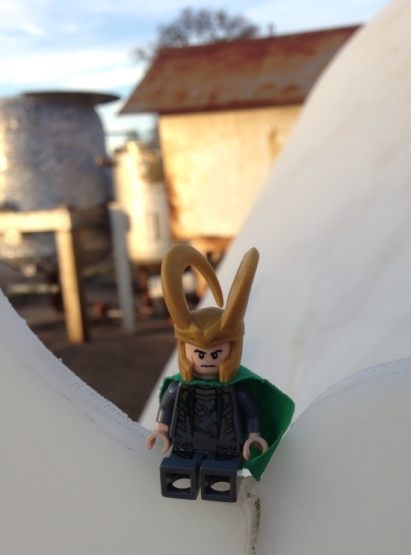 Look at this bit.  Those are some serious bolts!  It would take the Hulk to disassemble this assemblage. 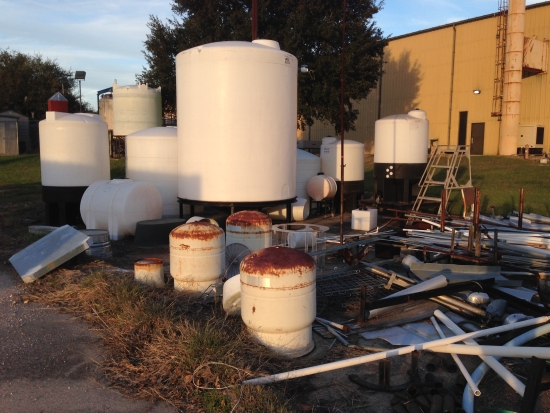 All of it’s rusty, most of it’s broken, and some of it is probably toxic.  Do we know what is in this big blue barrel? 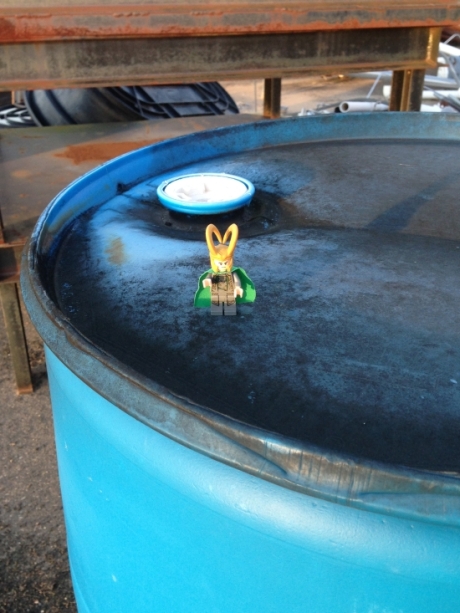 We do not!  I am probably radioactive now…

This contraption looks like the re-entry module of a small spaceship.

Say, this is some pretty excellent insulation.  This could keep a body toasty even in Jotunheim!

It could come in handy some day.  I think I might have to take some of it.

Rats!  I’m losing the daylight, and there is so much more fun junk on the other side of the building.  Sit tight, fun junk–I shall return!

You got all excited when you found some cinnamon-sugar pretzels at the Big Fancy Food Market.  They make a nice snack, with the added benefit that they’re less inclined to go straight to your thighs than cake or cookies.

You packed some in your lunch today and have been looking forward to eating them all morning.

Here–I’ll open them for you.

The humans have made a quick trip to the Big City to the South to visit the Knittery Friend and her family.  As usual, the human female has dragged us all to the big market in search of bizarre comestibles and weird produce.

While Sigyn smells every rose in the floral depatment… 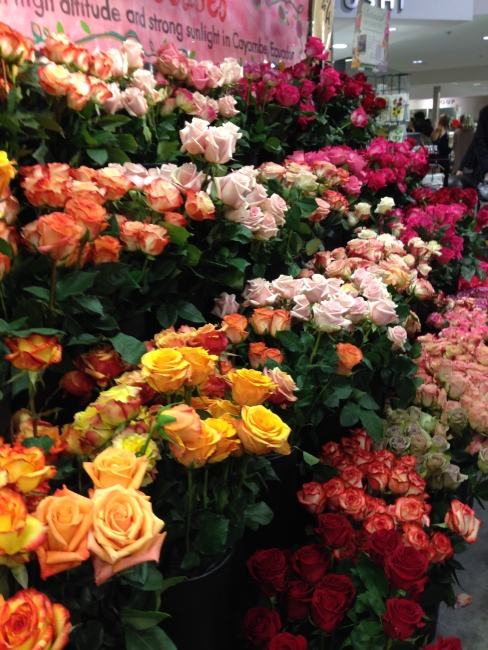 By all the creepy-crawlies of the Cretaceous!  It has scales!  It looks like some unholy hybrid of a green mango and a dinosaur.  What would such a thing even taste like?