It wasn’t me.  I swear! I have a pocketful of Waitrose receipts to prove I’ve been right here…

London may be an ultra-modern, high-tech, chrome-and-glass sort of city, but there is an awful lot of “past”here.  In Asgard, things stay the same for millennia.  Things change here, but you don’t have to look very hard to find bits and pieces of ancientry.

I think the humans may have planned today to be Get Your Head Stuck In The Past Day.  We are at the National Gallery, not to see the “Rise of Modern Art” exhibit that we saw the big lion poster for the other day.  Nay!  We are looking at room after room after room of paintings and carvings from the so-called Middle Ages, the creamy filling in the cookie that is European Midgardian history.

I have a rather low tolerance for religious art, but Sigyn and the humans are greeting each face as if it belongs to an old friend.

Among the simpering saints is this interesting-looking lady.  She is wearing green and reading a book.  I approve–she looks like someone I might have wanted to meet.  (But I wonder what’s in her sippy cup?)

Augh!  There is another whole *gallery* of Medieval religious art!  Doesn’t this exhibit ever END?

Ah.  Apparently it does.  Now we have some paintings from the period known as the Renaissance. Sigyn admires the crisp technique of this one, but she thinks the subject matter is a little violent and is becoming quite distressed. 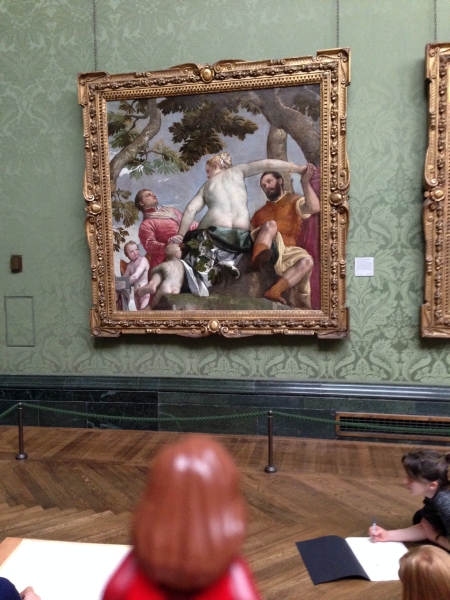 No, sweetie, don’t worry!  Obviously this semi-clothed lady has been out hiking in the woods and these two gentlemen are just, er…helping her check for ticks.  Yes!  That’s it!  But here, Sigyn, this is more peaceful, 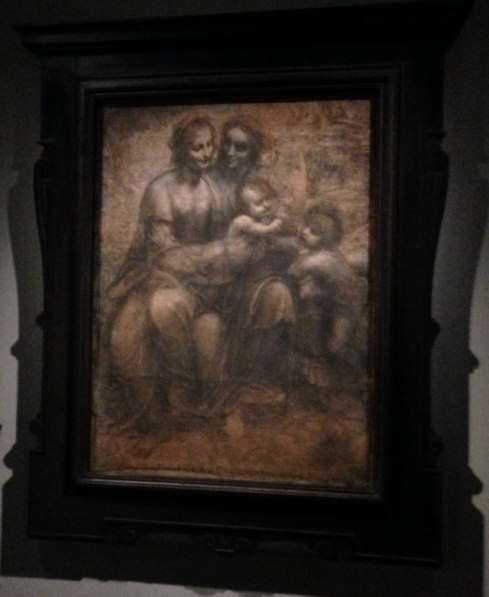 and it was drawn by that Leonardo fellow we learned about at Science Museum.  The guide says it is called the “Burlington House Cartoon.”  It is certainly more realistically drawn than the cartoons which air on Saturday morning television!  I suppose artists of the Renaissance took more pride in their work.

Oh, Sigyn…  You are going to love this little room.  It is full of Dutch flower paintings! 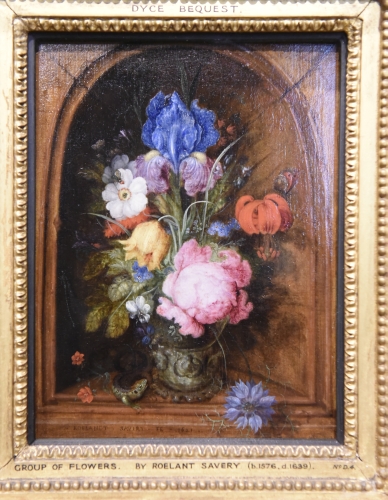 The human female says that they are painted accurately enough to identify to species.  Too bad the light isn’t better for photography!  Too bad there are alarms and guards watching so that Sigyn can’t choose a favorite to take home.

The humans are not as interested in most of the more modern periods and, after ascertaining that all the paintings by some artists the female calls Pre-Raphaelites are not in this gallery but in one called the Tate, we have all decided to leave the National Gallery and go around the corner to the National Portrait Gallery.

There is something for everyone here.  Sigyn and the human female are fascinated by the gems and embroidery on this queen’s gown.  (She looks familiar.  Have we seen her before?) 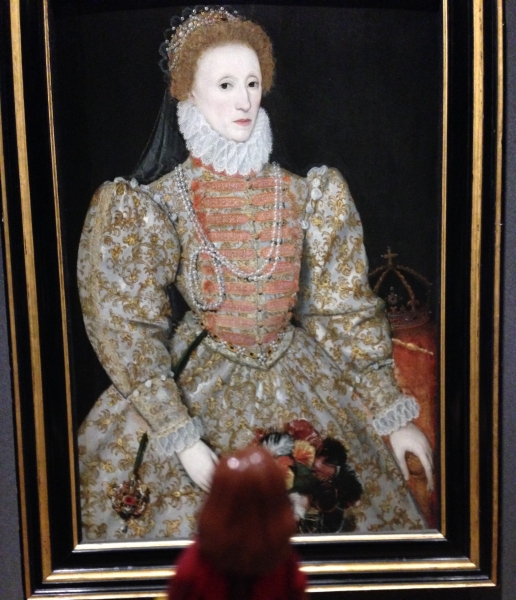 The human male especially wanted to see this fellow, a churchman who stood up to a greedy king.  Hmm. Not sure how I feel about that.  I certainly won’t want anyone defying me once I take over.

But I do like this portrait.  Or most of it, anyway.

His black and gold armour is quite fine, though his headgear is far more ridiculous than mine and I would not be caught dead is such outrageous plumpty, poomfy trousers.  Probably he is carrying that baton to smack people who titter when he walks by.

All in all, I like this place!  Along with all of the noble kings and holy men and women, there are some downright stinkers portrayed here.  Must read more about this Cromwell fellow…

Lunch time.  Ah, Museum Food.  My favorite.  Not.  Still, this is not a sandwich, so: bonus points.  Here, Sigyn, I’ll read off the ingredients, and you see if you can find them in the bowl:  bow ties, goat cheese, pine nuts, pesto, roasted peppers…

Brrr!  We are back outside and heading for the Tube station again.  Objective:  the station we saw yesterday, the one with the giant Monument to a Fire That Was Not Loki’s Fault.  But the monument is not where we’re going.  No, we are headed for–Odin’s eyepatch!  Another church?!  It is easy to tell that I was not consulted about the finer points of today’s agenda.  (Had I been, there would be more looking at weapons and a lot less looking at paintings by and of dead people.)

This church stands where the original bridge over the river had one of its feet.  We’re here today, not just to admire old stonework or to learn how no one is really sure which St. Magnus was the martyr in question (there appear to have been candidates to spare!), but to witness as odd a ceremony as I have ever seen on Midgard.  The relic of a different martyr, a local boy made good, is “visiting” from its usual resting place somewhere else in Europe.

(a bit later) I was not allowed into the church (and no photos were permitted), but I saw the procession going in. Fancy! I don’t know what kind of man he was when alive, but folks seem to like him well enough now that he’s dead.

Now we have some time to kill before the evening’s events.  This involves wandering about, looking at architecture and watching people.  London may be a bit dirty, and it is certainly noisy and jostle-y, but it is never, ever boring.  The humans have been playing Exotic Car Bingo this whole trip.  Last night, as we waited for our kebabs, we watched a brash young Lamborghini driver absolutely manhandle his expensive play toy into a parallel parking space while onlookers jeered.  Imagine Thor trying to wriggle into a corset and you about have the idea.

Time for a snack, as we’ll be getting home very late.  We are “dining” at one of the city’s many “Prets,”  which, in an act of defiant misrepresentation, does not seem to sell pretzels at all.  No, the human male has a sandwich (with crisps, of course), and Sigyn and the female are trying to get warm with some hot soup. 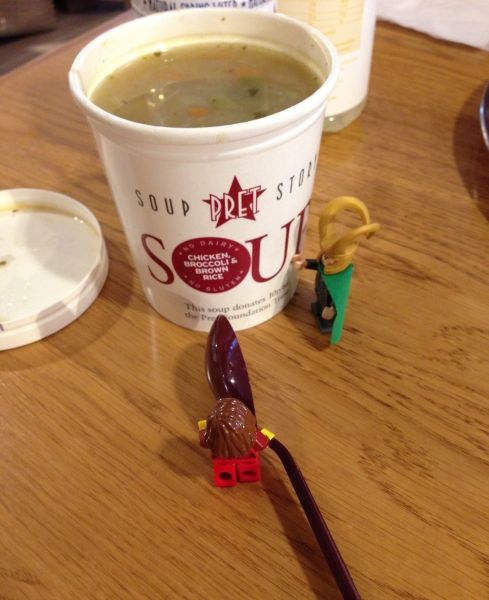 Alas!  This Pret is somehow out of Bakewell Tart.  If I keep this up, the human female will return stateside without getting so much as a sniff of one.

Time to head for today’s special treat.  We have concert tickets, said concert to take place in–is anyone surprised?–yet another church!  I have been told that I can attend under injunction of strictest silence.  (I believe the human female’s exact words were, “One peep out of you, wise ass, and I will stuff you in the poor box.”  And she wonders why she is yet tartless.)

This church is unlike any of the others we have seen.  One rounds the corner from the Victoria tube station and Wham!  There it sits, like some fantastic sponge-and-jam layer cake created by a baker homesick for Venice and Byzantium. 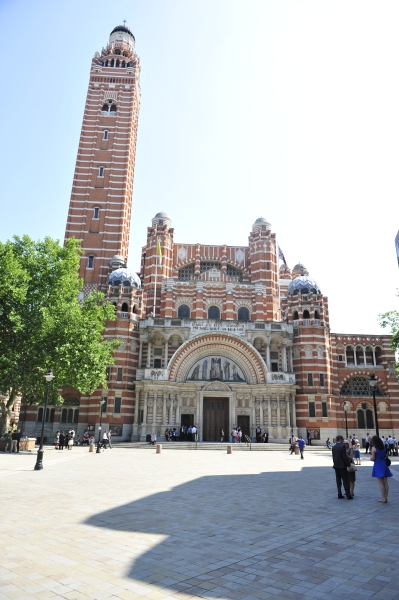 (whispering)  Fandral’s curly mustache!  Look, Sigyn!  The inside is even more orate than the outside!  Every surface a human could reach has been covered with stone inlay and mosaic.  The higher-up bits are as yet undecorated, the idea being that future generations will continue to add to the glory.

We could spend days just trying to see all of this.  I am most impressed by the little, shiny, gold mosaic tiles (surely no one would miss a few), but Sigyn is most delighted by a new friend from a side chapel dedicated to some saintly fishermen.

We are now being herded to our seats and further shushed.  Tonight’s program is to be “Spanish Renaissance polyphony,” whatever that is.  Music by dead people, I’ll bet.

(later.)  Well, that was in Latin, which Allspeak seems to have difficulties with, so I couldn’t catch the words, but those men and little bitty boys did a fine job, filling that shiny space full up with sound.  The human female says she hopes it softened my heart a bit.  Faugh!  The Rightful King of Asgard and Future Ruler of Midgard does not need–or want– a soft heart!

But I did pick up a few decorating tips for my eventual palace.

Come, Sigyn, let’s for home.  We didn’t exert ourselves much today, but we are all tired. Have you noticed that the human female has taken to muttering, “Once more unto the breach, dear friends, once more!” every night as she faces the stairs to the hotel room and drags her carcass up them?  She is too old for this!