The humans are fond of music.  Now, I’m not much for the rootley-tootley chamber music the human female likes so much, and she has been driving me up the proverbial wall with Yule tunes all this month, but she and Sigyn have their hearts set on going to the annual local Medieval and Renaissance Yule concert.  Gnaaaaagh… Crumhorns.  But it’s what my sweetie wants, so…

And here we are.  I had to talk my way past the doorkeeper to be let into the church.  For some reason they weren’t keen on allowing me over the threshold–maybe it’s the helmet and the horns?  I don’t know.

I rather expect to be bored.  Just look at the program! 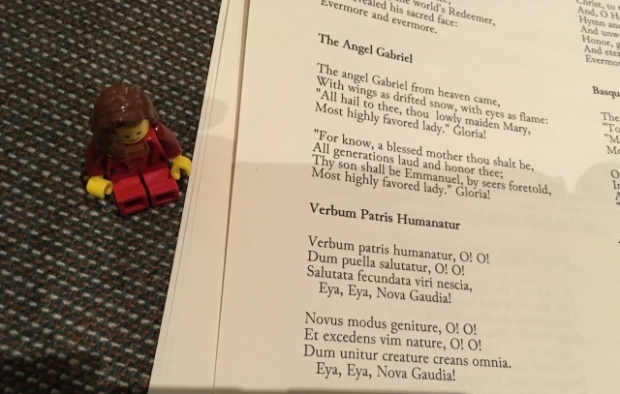 Half of it’s not even in the local patios!  However, I understand that there will be refreshments afterwards, so I suppose I can sit still until then.

Well, that was…not awful.  The humans and Sigyn liked it, but I really don’t see the point.

Time for food!  Didn’t we feast just yesterday?  I’m not sure where Sigyn puts it all.  She never seems to gain an ounce.  (Can’t say the same for the human female.)  What’s on the refreshment table this year?

Orange-cranberry scone and a sort of weird fruitcake-cheesecake hybrid.  Must be an Episcopalian thing.  It certainly looks…gooey.

There is quite a bit of “colorful” on the other side of the room.  Oh, I see.  Various wares to be sold in support of charitable endeavors.  Sigyn is making friends with some visitors from South America.

Sigyn, don’t we know his cousin?

And I believe we have met this fellow’s kin before, too!

Sigyn is chattering away at these two, but they are from Guatemala and I don’t think they understand a word she’s saying.

While they explore the interspecies-international language barrier, I think I will slip back into the church.  There are some lovely, shiny, expensive, handle-with-white-gloves-only handbells that desperately need some cheesecakey fingerprints..

She’s standing right behind me, isn’t she?

It is truly the Eating Season, with an endless round of parties, breakfasts, luncheons, and assorted snacktaculars.  The human female always looks forward to the Departmental Luncheon at work.  It is a time to socialize with coworkers and people who work in other buildings.  A time of hail-fellow-well-met.  But mostly a time of unrestrained gluttony.  Sigyn and I have attended before.  There is usually a good variety of comestibles to choose from, and I am by no means averse to trying a little of everything.

Dammit all to Hel and back!  Just as I was assessing her laden plate, the human female nudged me accidentally-on-purpose, and the unthinkable happened.

Laugh it up, you hag.  I must and shall be avenged.  By Thor’s bitty pall-peen, I hope turkey gravy is not permanently damaging to helmets!

That’s better.  Now, what have we here? 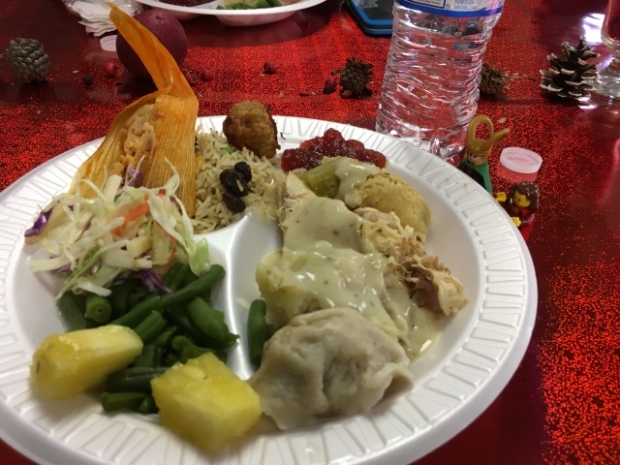 Turkey, dressing, potatoes, gravy, green things, yellow fruity things, the human female’s usual offering of pilaf, some shreddy vegetables, a little ball of something that smells vaguely sausagesque, some red goo, and something wrapped in something leafy.  You distract the human female, Sigyn, and I’ll taste-test to see what’s good.

Sigyn is engaging the human female in a discussion of Yule trees.  Sigyn thinks this one is pretty, and a good size.

I don’t know.  I’m not usually much for flocked trees, but if Sigyn likes it…  Sweetie, you do know that I can frost any tree you pick, right?

Oh, no!  Sigyn’s interaction with the table decor has reached unacceptable levels.

Sigh.  Attracted, no doubt, by the sparkly red balls and the crinkly red paper.  Hold tight, my love.  Loki’s coming.

I think we both deserve a big plate of dessert to allay the horrors of our accidents, don’t you?  Let’s see what’s on the goodie table. 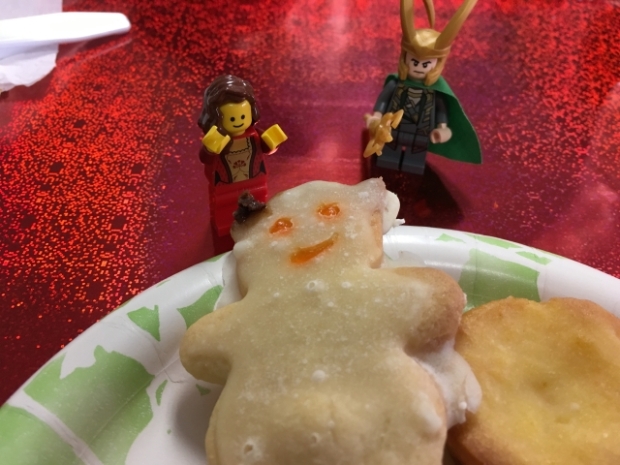 Sigyn is delighted to see that there are cut-out cookies.  Please tell me this isn’t the same bear as last year?  He looks less worried but seems to have acquired some brown…something… on his right ear.  Do I even want to know what it is?

Let’s see what else we have.

Volstagg’s embonpont!  I don’t recognize half of this!  But it looks as if it includes an impressive quantity of nuts, fruits, sugar, and fat, so we’re good.  But look at the lower part of that bear!  The human female has eaten his left foot, but there is a second one underneath!  Mutant bear?  Two bears stuck together?  Bear with a spare?  Perhaps that’s why he looks less anxious this year–he knows he can afford to lose a leg and keep on going.

But has he got a second head?  Let’s see you recover from this, you ursine confection!  Munch, munch, munch…

So the Yule shopping is going on…and on… and on.  The human female is looking for brocade ribbon.   And books for small people.   And a certain “yummy bergamot and cedar” hand soap recommended by a friend of her mother’s.  But can she look at just ribbon and books and hand soap?  NO, SHE CANNOT.

She is looking at everything, and by Odin’s monocular vision there is so. much. CRAP to look at that we will probably still be wandering aimlessly come the spring equinox.

And the crap is starting to take on a very disturbing slant.  Look at these!

As much as I adore the thought of blowing my nose on my brother’s oafish face, and as much as Steve’s goody-goody-ness still gives me a rash and kidney failure so I don’t mind if he is snotted on as well, I fail to see the pressing need to make a product like this at all.  What’s that?  The actual tissues aren’t printed with their stupid faces?  That takes away all the fun and makes them an even more ridiculous idea.

Sweet glittering Bifrost! There is more: 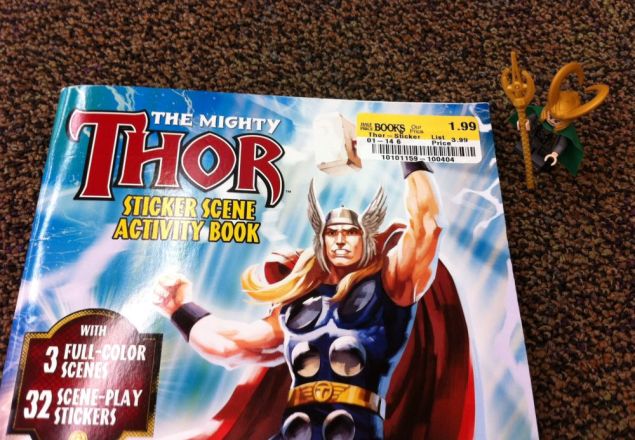 NO!  The godson does not not need any stickers this year!  Keep moving!

Augh!  There is my stupid not brother again! 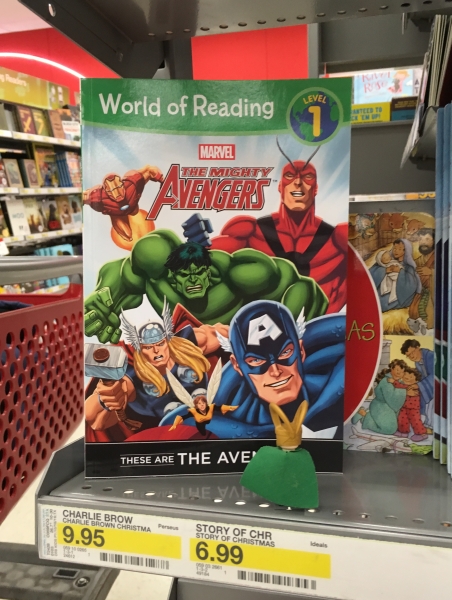 The shelf may say “Charlie Brown,” but the hammer and the dorky helmet are a dead giveaway. 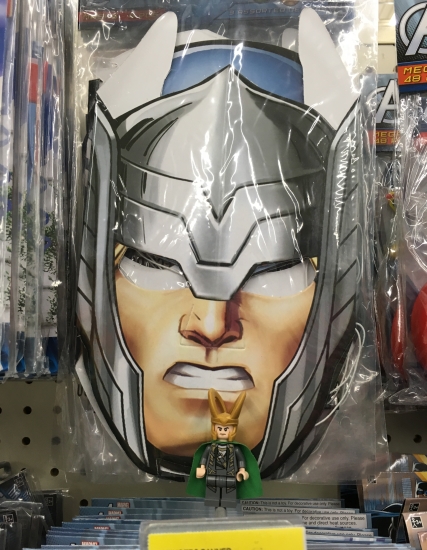 This thor has bits you can swap out with Frost Giant parts.  That…  That is a good idea, actually.  Let’s see how he likes being ostracized and ridiculed for a little chilly DNA.

All in all, far too much blonde Asgardian beef on sale today.  I think the needle on my thor-o-meter is ticking into the red zone.

Please, can we go HOME now?

While the human female is dithering about what to purchase for the people in her life who can stand her for long enough to be counted “friends” (family, sadly, do not have a choice and are stuck with her), Sigyn and I are looking over the merchants’ wares.  I’m hoping Sigyn will give some indication of something she might like for a gift.  She’s actually difficult to shop for–she’s so blessedly cheerful that she likes everything, but I’d like to find her something she like likes.

There is some festive yarn in colors we both approve of…

…but her knitting efforts aren’t always the most successful.  (It’s the only craft I’ve found at which she is not proficient.)

She might have fun with this Sweet Shop setup…

…but we both prefer real food to plastic. (If the human female doesn’t get off her procrastinatory behind and produce some Yule cookies very soon, I shall have to make my displeasure known.)

What are you looking at now, dearest?  Oh.  Um.  That’s…interesting. 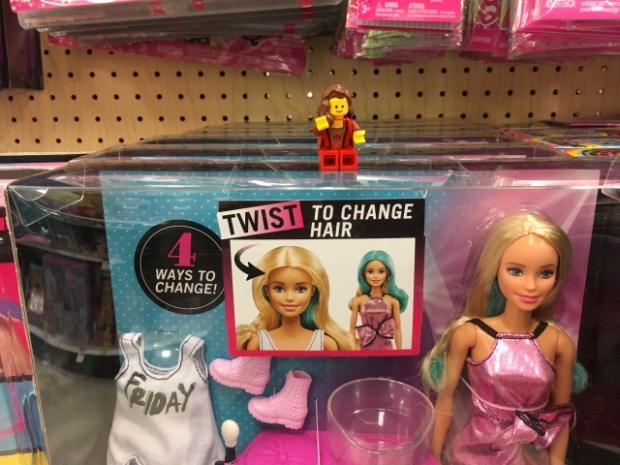 Yes, the aqua hair is very… different.  Yes, it might be fun if you could change your hair color at will, as the blue-haired goddaughter is wont to do.  But please remember that my magic is at your disposal, and should you truly wish to alter your lustrous chestnut locks, a simple temporary glamour is an infinitely preferable alternative to hair dye.

Aha!  This is more like it!   Stupid names, all of them, but these fierce fellows would make an excellent addition to my army.  Would I not look magnificent riding one into battle?  Come, my pretties.

Hmm.  It would appear that Sigyn is also making new friends.

Or, at least, the blue-eyed flying cat seems open to rapprochement.  The green eyed one seems to be uncomfortably wondering who had the bean empanadas for lunch…

Great Frigga’s Hairpins!  I actually looked at a calendar today.  I had no idea Yule was this close!  Coming, yes, but NEXT WEEK?  Didn’t we just do all the wrapping and baking and fa la la-ing?

But no, it really is the late-middle-ish bit of December, and the human female is out and about, trying to find the “perfect” gifts for all her dear ones.  Sigyn and I have tagged along just to watch.  Crowds.  Flashing lights.  Abundant glitter.  Holiday “music.”  I’m betting she can’t go more than an hour in this tacky plastic wonderland before she starts to twitch.

Just to help the process along, I think I shall indulge in a bit of creative signage.

Eh he he he!  Sigyn, you do one!  (You can change it back later if you really want to.)

Eh he he he he!  I think I’ll go label all the power tool sets as “bath treasures for her” and put the “festive holiday stationery” sign on the rolls of toilet tissue.

This is more fun than I thought!

The spring primroses and thistles are blooming on the roadsides.  The days alternate between nippy and balmy.  Shorts are seen as often as gloves. Some of the trees are starting to show just a smidge of fall color.

Houses and shops are ablaze with tiny lights on a nightly basis.  All of these conflicting signs can only be pointing to one thing.

I can foresee that I will be needing to acquire some cash to do a bit of holiday shopping.  Fortunately, the onset of seasonal retail madness coincides with the university’s final exams, so… 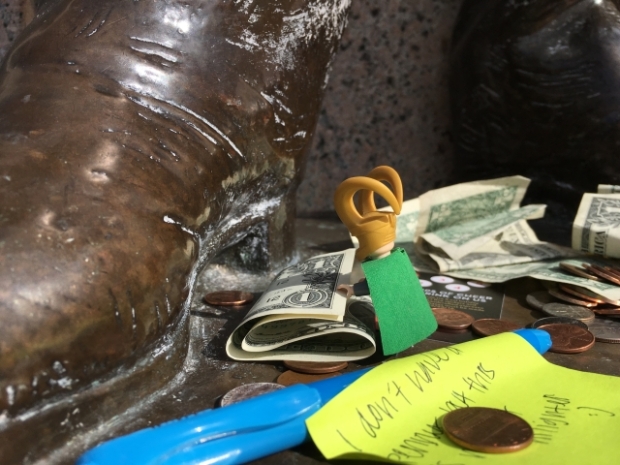 Eh he he he.  There’s a small fortune here–coins, bills, a coupon for free food.  Some folks don’t even have that and just leave what they can: 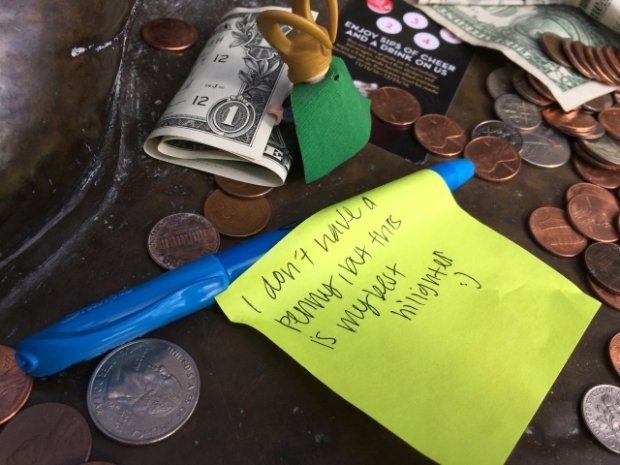 The Midgardians with whom I lodge do things sometimes which are completely inexplicable.  Take, for instance, this new candleholder-wreath combination. 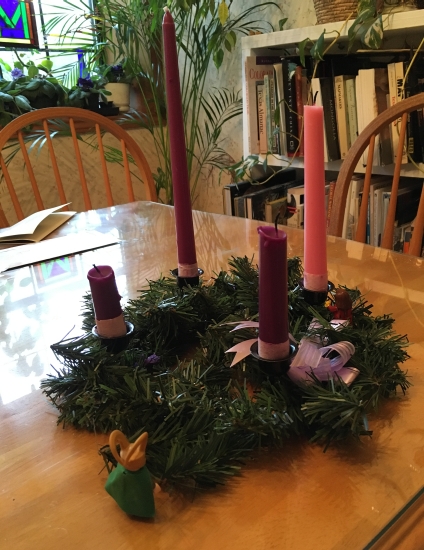 Three purple candles and one pink one–and no two the same height!  What a mess. 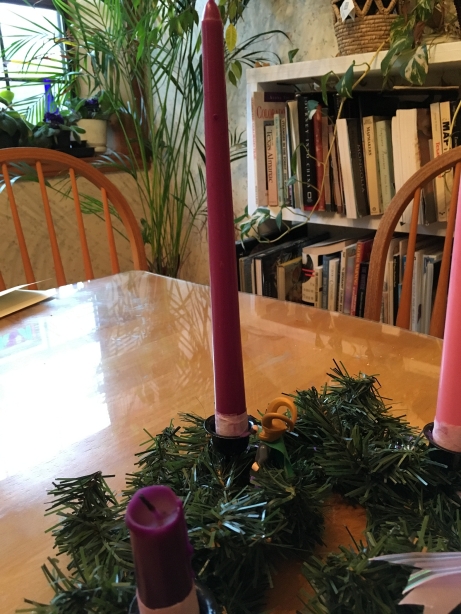 I mean LOOK at this.  Ignore the fake greenery and the weird ribbon.  They’re bad enough, but it’s the candles themselves that are giving me hives.  This one hasn’t even been lit yet.

Now, I can think of three possible reasons for this hideousness.  All seem to me to be equally likely:

Not since Sif tried her hand at crochet have I seen such a monstrosity.

After careful consideration, I think I can improve this fiasco.