And then there is this magnificent bastard.

Oh, you beauty!   Look at those horns.  I think I have found a worthy animal for my iconography.  Wolves and snakes and eight-legged horses are old news.  This creature, this paragon, this ibex is truly a beast after my own heart.

Uh, oh.  It is clouding up and threatening to rain.  All of our party deems it prudent to seek shelter and sustenance and wait out the squall.  The humans have chosen salad.  You distract them Sigyn, and I will take the opportunity to appropriate some of this delicious lettuce.  I’m thinking maybe the ibex might like a change from alfalfa and hoofstock pellets. 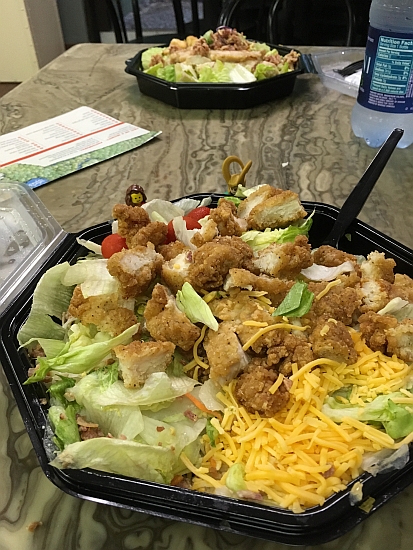 (later)  The rain has passed over.  We are now studying a large reef tank which is home to a shark and many colorful fish.  Look at this one: 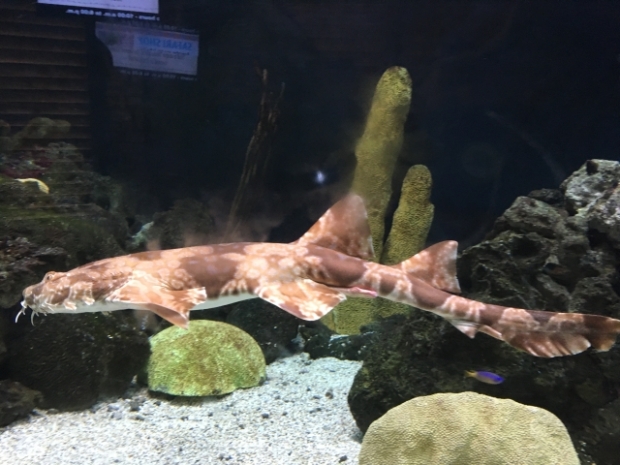 I cannot decide whether it has some sort of terrible skin disease or if it came that way.  The label says it is a wobbegong or carpet shark. That is one patchy-looking carpet.  Time to call Stanley Steemer.

Ehehehehehe!  Sigyn look at this little fellow!  What a beaky little face!  He could nibble an apple through a picket fence.

The tank sign says this is a “birdmouth wrasse.”  You’d think with that skinny little kisser he couldn’t eat much, but apparently they will happily eat their tankmates.  Way to go, little fishy!

Outside, the zoo has a large area of pavement set with fossils from various parts of the realm.  Sigyn has become enamored of this ammonite slice, which does indeed exhibit a pleasing fractally goodness.

All day, we have been seeing signs directing visitors to the Mola.  “This way to the Mola!”  “Why not see the Mola!”  Now, I have to admit, the human female knows quite a lot about animals for a botanist.  She says the only “mola” she knows of is the ocean sunfish, which seems to have misplaced its tail at some point during its evolution. (Take a look at that link.  Those things are creepy.)  However, there is no indication on the zoo map of any large, tail-less, mostly-cartilaginous fish.

(somewhat later)  Ah.  Museum Of Living Art, or MOLA.  That is what this establishment calls its reptile house.  Out in front is another one of the ubiquitous statues.  This one depicts a komodo dragon, a fierce, fearsome, wickedly clawed reptile after my own heart.

Given that this statue is lifesize, however, I think I am quite content for it to reside behind glass inside this facility!

This building houses many dangerous reptiles.  Behold the deadly Gaboon Viper and its exceptional camouflage!

Best to be careful, then, in the jungles of sub-Saharan Africa.  If disturbed, this serpent is likely to lash out and bite one right in the gaboon.

Augh!  Out of the MOLA and back out into the sun.  So BRIGHT!  Warn a fellow, why don’t you!  Still, it is reasonably cool, so there is that.

On our way out, we are stopping to look at one of several colonies of large, garishly pink wading birds.  By Hugnin and Muninn’s downly little pinfeathers!  Have you ever seen anything quite so silly, Sigyn?  (Besides the human female, of course.)  Their beaks are on upside down, those knees are ridiculous, and can we TALK about the flappy pink feet?

And so noisy!   Standing next to the flock is like being at a crowded cocktail party full of garrulous, inebriated kindergarten teachers.  Several of the improbably-colored creatures have built tall mud nests, each crowned by a single large egg.   Just what we need!  More gabby, roseate, stilty-beasts!

We have been walking all day.  Sigyn is starting to look a little weary, though her brave smile never falters.  Come, my love.  Let us repair to the inn, have a bit of a wash-up, and venture out in search of a delectable supper…