Next time I start wishing for something interesting to happen, will someone please smack me?

I didn’t mean for so much water to happen.  I invited this moist fellow, Harvey, to come and spoil the human female’s prospects of gardening, but I want it on record that his wanton destruction and disregard for conventional limits on precipitation were none of my plan.   Many things in this universe may be laid at my doorstep, but I refuse to be responsible for anything other than the human female’s soggy socks.

The humans and their felines are weathering the storm as best they can.  They attempted to do some last-minute securing of provisions on Friday, but the market was picked clean.  The human female, however, usually has enough comestibles on hand to feed at least a small army, so her response to the unrelenting downpour, out of some atavistic impulse to provide for the household, was to make bread.

Here it is in its pupal, resting stage.

The storm has spawned a number of tornadoes.  The human female was awakened rudely on Saturday by both the storm alarm on the radio and the human male.  There followed a very cramped and interesting half hour when we all huddled in the closet with the felines.  (Fickle beasts–every other day of the year they prowl about trying to get into the closet, but on this day, they resisted with all their furry might.)

It didn’t take too long before I was bored, so I saw to it that they first entertained Sigyn and me with a wrestling match and then used the human male as a jungle gym.

The humans have had to venture out to do some churchly things and have come back with photographs.

This town is not as badly off as many to the south  (the Large City to the South, in particular, is very floody.)

Still, driving has been tricky.

The retention area by the horrible apartments going up on the former site of Sigyn’s beloved pond is now a small inland sea.

The apartments, alas, are still standing.

It has been raining pretty steadily since Friday night, but there have been a few tiny breaks in the downpour.  Sigyn and I took advantage of one such to go for a little float. 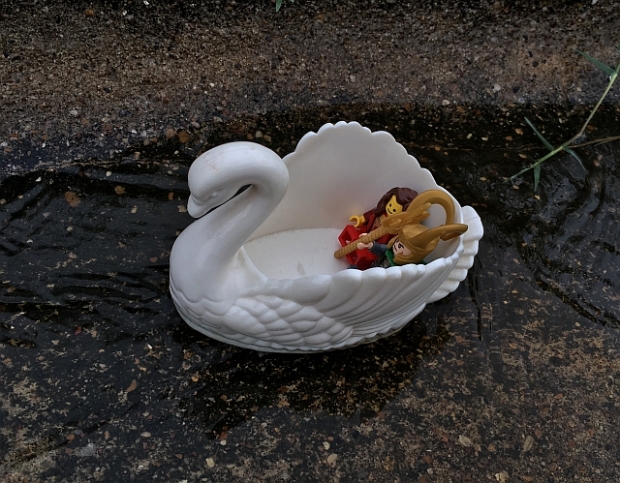