The human female would insist that she and the male don’t spoil the Terror Twins.  Oh, is that so?   Then how do you explain the fact that this house is just littered with toys?  I am growing weary of stepping on them in the middle of the night when I get up to do a little mischief.  (Though it is fun to hear the humans trip and curse!)  The floor of the whole house is one big feline playground.  As well as the no-man’s-land under the sofa.

Look, Sigyn!  Have you ever seen so many feline amusements all in one place?

It’s not always pretty.   Here we have a pom-pom which has obviously known better days.

It appears to be hemorrhaging yarn.

Most of the toys have names.  This one is Chicken Nugget. 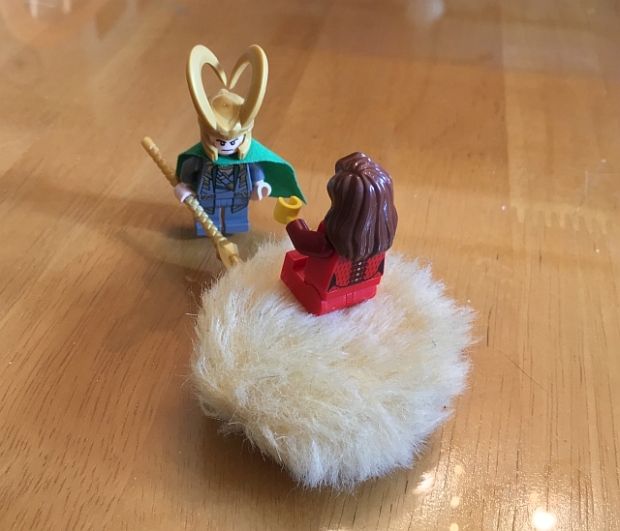 It has a sibling, in a dark leopard print, that the human female calls Rotten Nugget.  Charming.

This is Nipfish.  Like most of the toys, the felines are only interested in it if it is being thrown.  Just lying here, it is a very boring fish.

With her usual lack of imagination, the human female has dubbed these Blue Mousie and Green Mousie.   Green Mousie has an owie.

Eww!  Sigyn, do not try to comfort the mousies!  Their fur is all stiff and nasty with cat spit.

This is Sparkle Mouse. 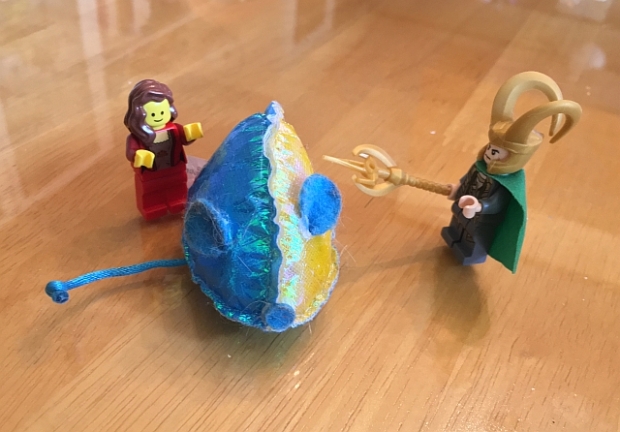 He disappears for days at a time but always resurfaces, a little the worse for wear.  He leaves little sparkly threads all over the house.  But he still has his nose, so there’s that.

This is one of the Tan Mice.  There are two of them.

Flannel and Taffy have the bad habit of chewing bits off their toys.  This one has two little dots left for a face.  I’m not sure if it’s one eye and a nose or two weirdly-situated eyes.  It doesn’t much matter.  They’ll both be gone in a week.

The humans bought a package of three furry mice, since the felines seem to like those best.  There was a black one, a gray one, and a white one.   The gray one is called Hairball Mouse, because that’s what it looks like.  It is missing an ear, which makes Sigyn very sad.   No, my love, don’t pet it—more cat spit.

The black one was evidently the most fun to play with, because the kitties used to leave it in the middle of the living room or down the hallway every night.  In the dim light of morning, it was easily mistaken for something that should have been left in the litter box.  Sadly,  Turdmouse disappeared a few weeks back and has not been seen since.   The human thinks she found his nose, though.  It’s hard to be sure. One bit of chewed-up felt looks much like another.

I have taught the felines well.  They can be counted on to snub the expensive, catnip-filled creations in favor  other things—bugs, string, hands, paper wads, toes, leaves, acorns, a bottle of antacid tablets, and the laces to the human female’s ankle brace.  (Om nom nom nom)  The female tried them with the ring from a milk carton, since those seem to be popular with pussycats.  Taffy was quite interested in it.  Well, in eating it.

Remember:  Anything not nailed down is a cat toy, and anything nailed down can be pried up.

And stepped on, barefoot, in middle of the night.