It’s a sad fact of science that equipment breaks, especially with undergrads around.  It’s a sadder fact of life with me around that the likelihood of a piece of apparatus malfunctioning is directly proportional to its usefulness and is proportional to the square of its price.

The human female and her Prep Staff have thoughtfully provided Broken Equipment Forms in every room, whereupon the teaching assistants note what item is broken, a detailed yet concise description of what the problem is, what they were doing to it when it gave up the ghost, and what feeble attempts they might have made to repair it.  They then leave the form and the equipment in a prominent place in the lab room where Prep Staff can find them.

That’s the theory, anyway.   As often as not, I see to it that the TAs are busy teaching when something fails to function, and Prep Staff just finds a lonely thingamajig sitting out later with a cryptic note next to it (or not.)

Today I’m visiting room 317.  This is where all the spare bits like bulbs and cords and batteries are kept.  It’s also the Broken Equipment Graveyard, where all the dead things go.  Also the things that are only mostly dead.  Prep Staff will take a look and do what they can for each patient.  Whatever they can’t fix gets sent to the Instrument Shop.  When the Shop can’t resurrect something, this is where solemn, respectful final rites are held before the deceased is cannibalized for parts.

Let’s take a look around.  Odin’s Eyepatch!  It’s like an mechanical leper colony in here!

This is the kind of thoughtful, detailed note Prep Staff gets, carefully penned on the appropriate form.

Obviously, the difficulty was that the 40x and 100x objectives on this compound microscope were not giving a clear image.  Just as obviously, when the scope was examined, the problem failed to manifest.

Whoever left this one at least tried to point out where the problem is. 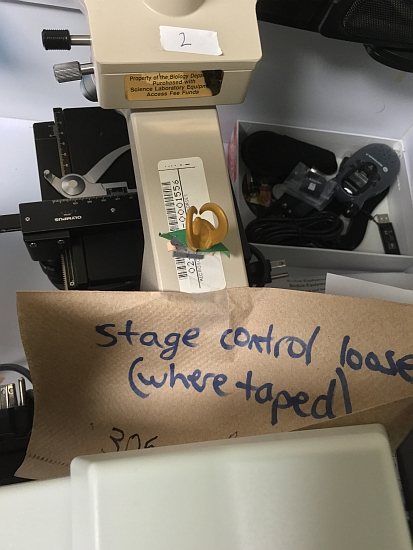 I love this next one.  Short. Terse. 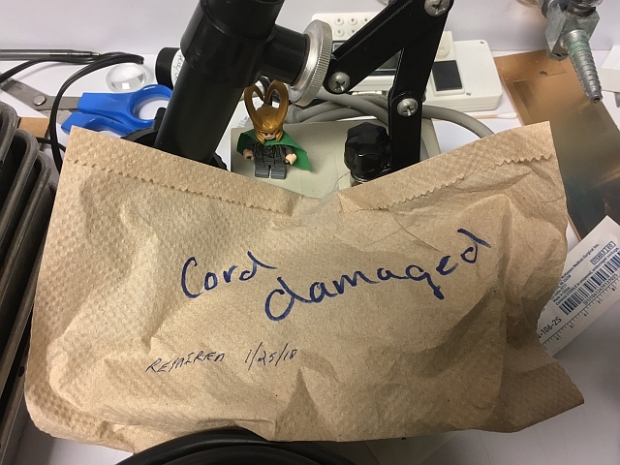 Completely lacking any indication of what bone-headed maneuver produced the damage.   Because, of course, nothing is ever anyone’s fault.

Ah, here’s a broken equipment form truly after my own heart.  Behold.

Here are a couple more.  What room are they from?  What’s wrong?  Who knows! 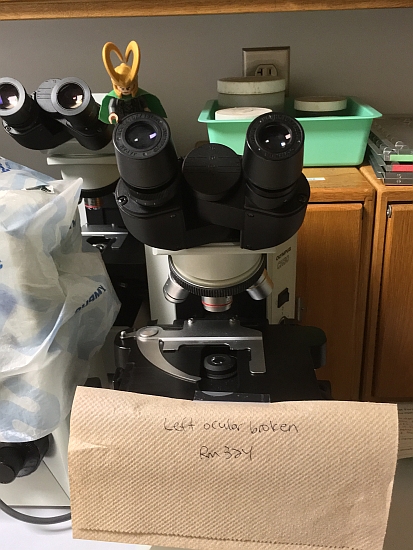 Tsk, tsk.  Oculars.  For something that the students aren’t really supposed to mess with, they seem to break a lot.  The lenses inside come loose, and when they do, there really isn’t a way to fix them.  (Fun Fact:  most adhesives that would fix a lens in place give off gases that instantly and permanently cloud glass.)

Thus the human female ends up trying to buy replacements.  They look like this:

Looks like something that should be a few dollars, max, right?

Uh, no.  Turns out that precision optics don’t come cheap, when the human female can even find them.  I’ve seen to it that about half of the microscopes on the floor are discontinued models, so the manufacturer won’t sell her replacement parts.  The poor woman has been forced to descend into the world of after-market surplus and refurbished parts.  She knows a guy who knows a guy…

She’s located someone who’s willing to sell her something that is “100% guaranteed to fit your model.”  Of course, they won’t work with the original equipment, so they must be installed in pairs.

But she has gritted her teeth and submitted the PO.  It has been approved and sent to the vendor.  Except, just for funsies (love that Midgardian word.  “Funsies”–heh!) it never arrived.  The vendor has not set eyes upon it.  It’s as if it has just evaporated into the ether.  Dear me, where could it be?