The humans like to cook.  They’ve been doing it for decades, so you’d think they’d be better at it than they are.  But alas!  Though they do all right with simple fare, their imagination is sadly lacking.  To save them from becoming terminally boring, I have taken it upon myself to hunt up some new recipes for them to try.

I shall have to keep in mind that the female is allergic to walnuts and okra and can’t have olive oil.  She despises bleu cheese and the male loathes squash, sour cream, and mushrooms.

I think I have it—seven lovely new recipes!  A whole week’s worth of enticing dishes.

This first one’s from a very posh cooking magazine, so it’s bound to be good.

Oh, did I mention neither one can abide cantaloupe?

The male has been known to have difficulties with sausage, especially if tomatoes are also involved.  One serving and he’s up all night with tummy issues.  He also has, shall we say, windy issues with things of a leguminous nature.

I’ve picked this one out with him in mind.

And to round out the week, I offer for their delectation: 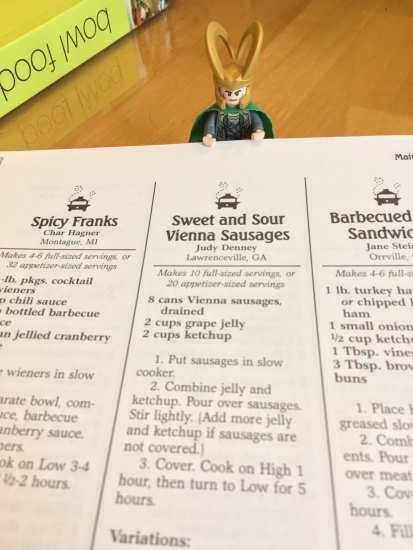