Well, Sigyn was able to cajole the… bee…thingy into giving us a little honey, so we are no longer starving.

But we are still lost.  My magic just doesn’t work well enough in this realm to send us back directly.  Four years ago, we came upon a ruined city and one thing led to another, until we ran afoul of the Great Goober and were reprieved at the last moment and sent home.

As much as I loathed His Gooberiness, I find myself wishing we could run into his scouts, get captured, and try to bribe our way back home, like last time.  But I don’t recognize any landmarks at all, so I don’t know which way to go to be intercepted.

We’ve climbed up on this promontory, so as to be able to see in all directions, but there is nothing familiar in sight.

Truly, it is a desolate and inhospitable place.

I haven’t said as much to Sigyn, but I am beginning to doubt that we shall make it out of here alive.  Clearly, at least one previous intrepid explorer succumbed to the elements.

I had a good rifle through the pockets for Useful Things, but came up empty-handed.  Not even so much as a match to make lighting a fire easier.

We desperately need to get out of the sun for a bit.  Looks like there’s  bit of a cave up ahead.  Surely it will be cooler inside, or at the very least, shady.

I was mistaken!   (That doesn’t happen often, but it does happen.)  This is no natural cave, it is a mine.  Abandoned, by the look of it.   You wait here, Sigyn, until I can ascertain whether it is occupied by beasts of an unfriendly nature.

Sigyn!  Behold!  Behold these beautiful gems!  It would appear that this mine was abandoned before the seams of precious minerals could be exhausted.  Seldom have I seen such perfect natural crystals!  I chose the two most beautiful–red for you and green for me. 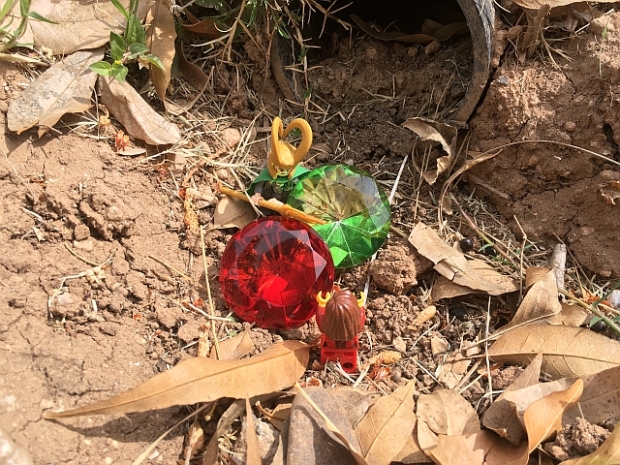 I will just tuck these into a handy pocket dimension.  If we can ever find civilization, we will have something to bribe and bargain with!

Things may be looking up!