The lawn really is getting awfully long.  Yesterday, I showed the human female how her little-pot-o’-mint has taken over the side yard.  Well, the actual grass is long, too.

Sigyn is hoping that the human female won’t mow this bit, which is right out in front of the house:

I toyed with the idea of trying to get those pink things to be TALLER, because then they’d be over the city’s 12-inch height limit and the human female would receive a nasty-gram and be forced to cut them down, but that would make Sigyn sad, so I’ve left them as they are.  I suppose it is rather festive.

The human female is thinking of buying a new lawn mower.  The old one has given more or less faithful service for about ten years and is now quite rusty and more than a bit temperamental.  The throttle cable has broken unfixably, so to start the engine, she has to wedge the throttle open with a piece of wood—and knock it out whenever she wants to cut the engine.  And then re-wedge it to resume, which usually results in her burning her hand on the exhaust.  I think it’s funny.  Her, not so much so.

She doesn’t want to put the remains of last year’s gas in a new mower, and the old gas container doesn’t seal or dispense so well anymore, so a new gas can is in order.  Luckily, there is a spare in the garage.

She has just discovered that I have hidden a crucial part of the cap. 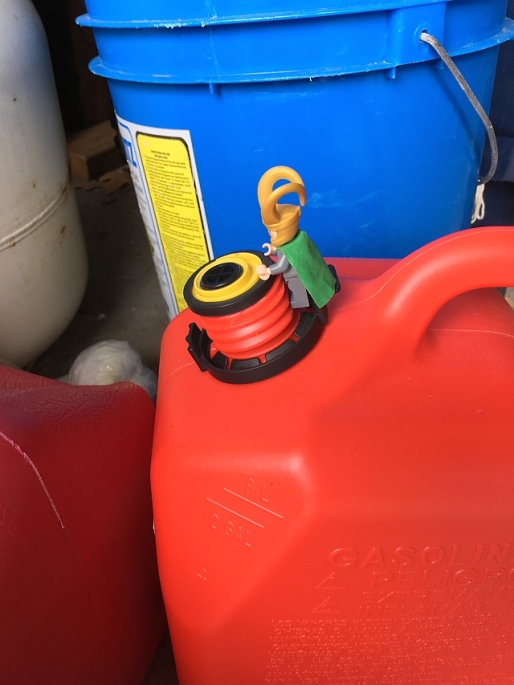 As in, the actual cap.

Off to the store we go!

This new one has an awkward kick-stand sort of thing one rests on the mower, and a clicky bit that looks as if it will break in no time.   I approve.

(later)  The human female has returned with a shiny new mower.  Ta Da!  Sigyn will love it.  It’s red. 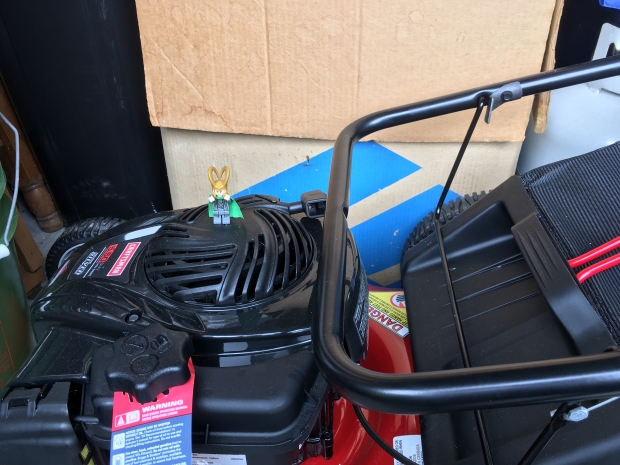 It was a Floor Model, on Extra-Special Super Closeout, As-is.  It didn’t come with an owner’s manual, so the human female spent a lot of hours online last night, trying to find one.  She’s printed out something that appears to be close.  We’ll see if it’s helpful in telling her how to switch from bagging to mulching.

Hmm.  The foldable handle unfolds, all right, but it appears to need two bolts to stay put together, and they were not included, either.  She has now spent thirty or so minutes rustling up something to finish assembling the handle.

Ehehehehehe!  She just found where I hid the manual AND the bolts inside the catcher bag!!

Time to mow!  Vrooom!  It seems to work well enough.  But, human, shouldn’t there be a mulching guard under the mulching door?  Consult the manual.  Yes, that bit right there.  The one your mower hasn’t got.

Better call the dealer’s hotline and ask about a replacement part.  What?   They’re not open today?  Pity.  You can try again tomorrow.

Human female (after navigating Byzantine phone tree):  So… This mower.  Missing a part.

Manufacturer/Dealer:  Sorry!  That is so not our problem.  Call the store where you bought it.  Here’s their number. Call them right now.

Manufacturer/Dealer:  Sorry!  Well, thanks for calling.

Department Manager:   Hahahahahaha!   Clearance?  You bought it, and I can’t even be arsed to go look to see if the missing bit is here.  “Floor-model Clearance” means AS IS.

Department Manager:  Says you.   Well, I suppose I can ask the Store Manager and call you back.

Department Manager:   Hi!  Sorry-not-sorry.  No can do.  You could, of course, wrestle it back over here and ask for a refund.

Human female:  Grr.  No wonder you appear to be going out of business.  You have not formally announced it yet, but when it happens I will come out to point and laugh.

So now she has a mower that may or may not actually need that extra bit to do its job.  And the kicker?   My favorite part of the whole ordeal is—-remember the bolts she finally found and put in?  I loosened one of them and it fell out while mowing!  That’s right!  The handle’s all collapsey on one side.  She’ll have to rummage around again for her little make-do and finagle it all together again!  And if she’s very unlucky, she’ll run over the missing bolt next time she mows and muck up  three or four of those 5.5 horsepower…