The Blue-haired Goddaughter, who spends a lot of time with the humans and felines, has actually finished her university degree and is graduating.

I am allowed to attend the ceremony, but I’ve had to promise not to do any mischief.  I hardly think, though, that I can be expected to sit through three hours of speechifying and names and not do something.  And I have so many good ideas!  Itching powder in the gowns, mixing up the diplomas in the tubes, putting a baby-voice modifier on the announcer’s microphone…  Great Frigga’s Corset!  At least let me put pickle juice in the water pitcher on the stage…

Oh, well.  Huh.  The Blue-haired Goddaughter has decked her mortarboard out with color-shifting  LED lights.  She’s the most noticeable thing in the whole arena and is sure to be featured on the video they’re making.  Mischief accomplished and I didn’t have to lift a finger.  Well done!  I guess she has learned from the best.

Now we’re at the graduation party.   There’s a very sentimental picture as a gift for the graduate, and everybody is signing the mat.

I like the Blue-haired Goddaughter well enough.  I think I’ll leave a note myself. 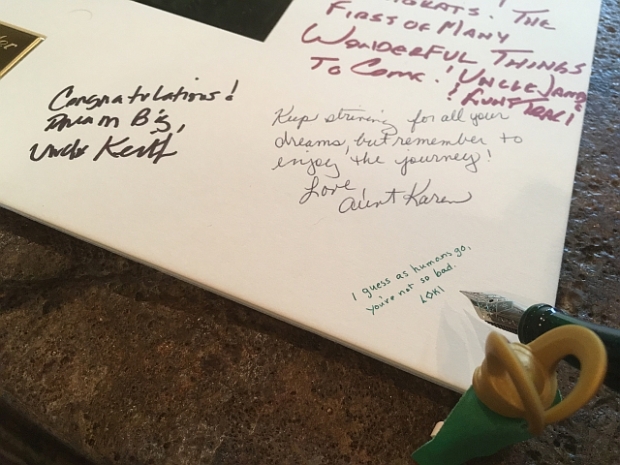