This is our first full day in the Big Pear  (Banana?  Some fruit or other.  I can’t be bothered to keep track of botany. That’s the human female’s thing.)

Our first order of business is an early lunch (we are getting a bit of late start today.)  One block over and two blocks down, the humans have located an eatery named “Tabouleh.”  That sounds uncomfortably close to “taboo.”  Perhaps some of the items on the menu are forbidden to certain people?  Illicit foodstuffs.  Sounds intriguing.

The human female has ordered something called “chicken shwarma.”  Shwarma… I seem to recall sitting chained to a lightpost a few blocks over from here, with nothing but bread and water while my stupid brother and his friends ate “shwarma.”

The human female says it is delicious.  I don’t trust it.

The human male has chosen today’s activity.  On the west side of this island is a mostly-floating museum.  One part of it consists of a small, very cramped submersible ship, intriguingly named “The Growler,” which we have just toured.

I had not realized before today just how un-fond I am of narrow, metal, green-painted surroundings.

Sigyn thought it was “cozy.”

A second part of the museum consists of a broad plaza which houses this sleek and pointy aircraft.

They tell me it could fly several times the speed of sound.  I suppose if one cannot teleport that might come in handy.  When I come to rule this realm, I shall have a fleet of such airships, because I refuse to waste good magic on minions and whatnot.

A building at the end of the plaza houses an aircraft which the human male says was the prototype for a fleet which used to routinely fly to space and back.  That sounds (as they say) “hinky” to me.  The whole galaxy knows that Midgardians have scarce made it off this rock.

The remainder of the collection is actually housed on board an enormous ship the size of a small town.  All sorts of flying vessels line the deck.

I like this one.  It looks wickedly efficient.  The skull-and-crossbones flag is a nice touch, though if I…appropriate this craft I will need to replace it with something a little more “Loki.”

Sleek, black, and stealthy as my heart.   Come to Loki, you sweet thing.

Inside the ship/museum, there are many other exhibits, including a helicopter cockpit in which one can sit.

Somehow, it does not seem to have been designed for someone of my kingly stature.

(later)  It is now after nightfall.  We appear to be strolling aimlessly about.  The human female calls it “getting a feel for the neighborhood.”

I call it “getting lost.” 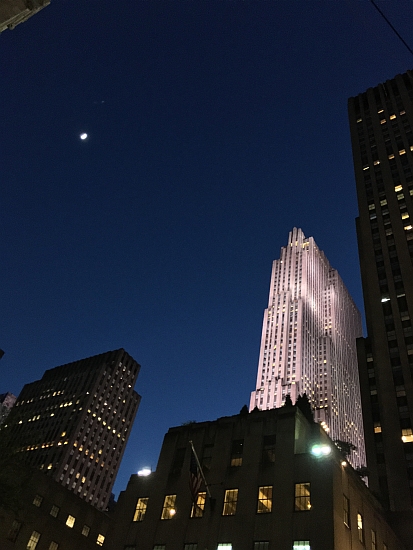 I gather that it is possible to ascend to the top of this imposing edifice–for a price. The humans intend to do just that, so that they can have a view of this whole metropolis at once.  Tickets are pricey and difficult to obtain.  I will have to see what I can do…