The students around these parts can’t manage to keep track of more than two things.  If they have a notebook, a phone, and a water bottle when they come to lab, they will leave with a notebook and a water bottle.  Or a water bottle and a phone.  Keys, glasses, notebooks, pencil pouches, earbuds, umbrellas, jackets, phones, ID cards, heads—you name it, it ends up in the lost and found and the human female has to deal with it.

Lately there’s been a glut of dissection kits.  The students just can’t seem to be bothered to write their names on them.  Most of the kits look alike–blue plastic case, scissors, scalpel, two probes, forceps.  The bookstore sells hundreds of them every semester.

This morning, however, a really, really nice one came in, and I have commenced to covet.

It’s all sharp and clean and pretty, not covered in hagfish bits or whatever they’re dissecting this week.  It’s in a zippered case with padding, not a cheap plastic box.

All the tools have little elastic loops to hold them steady.  Look! Gungnir would fit right here.

I recognize that tool on the right up there.  It’s a hemostat.  Very useful for clamping things— and pinching humans.

…and a whole assortment of probes.   I like this one.  It’s wicked pointy. 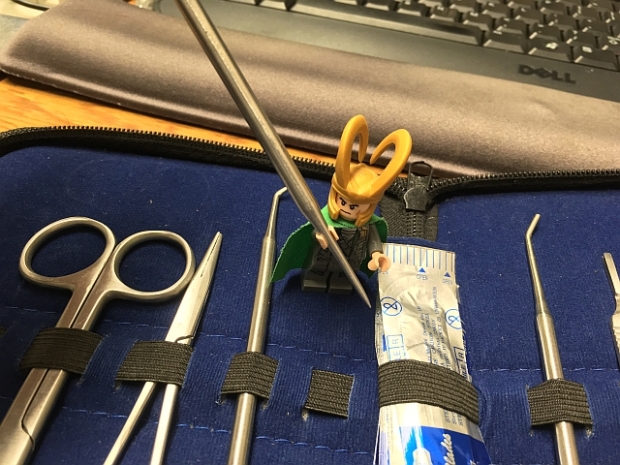 Neither the human female nor I recognized this thing.  She looked it up and it’s called a Groove Director (which sounds like an formal term for the Activities Coordinator on a cruise ship or something.)  Theoretically, one places it where one wishes to use a scalpel and cuts between the two lobes.  Saves fingers and prevents slips.

That may be so, but I think it looks quite…imperial.  I shall have one made in green and gold and appoint a flunky to stand behind my throne and hold it whenever I sit in state.  (And I will give it a better name.)

In the meantime, this gorgeous set is now mine.

And you can be sure I’m going to put my name on it.