As the human female is tediously fond of saying, it’s important to deal in facts, to look into the scientific explanations for various phenomena.

She needs to hang on tight, because I am about to hoist her with her own petard.

I shall now explain why she is the shape she is.

She read online that one of her favorite local eateries was making something called an Orange Dreamsicle Cupcake.   So, naturally, on her most recent visit to said establishment, she teased the human male into buying one for her.

There were approximately nine Sigyns of cream cheese icing, volume-wise. 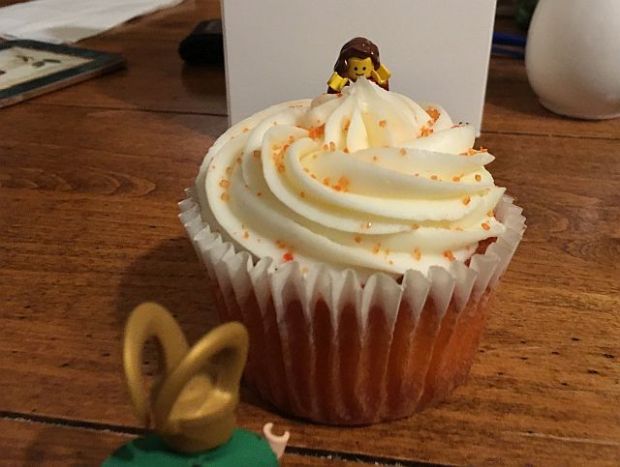 Far more calories than anyone should consume in one sitting.  And yet that is just what she did!

It doesn’t help her dumplitude that it is the Eating Season, that time of year between All Hallows and the New Year, when it is one long, continuous bombardment by candy, pie, desserts, turkey, more pie, yule cookies, and an unending parade of parties and other festivities.

For example, the human female’s immediate workgroup had their feastivities last week, and today the Biology Department is having their annual Ginormous Potluck.  Let’s take a look at her plate, shall we?

She’s got the basic food groups:  turkey, potatoes, samosas, pie, a cookie (under the pie), and strudel.

And there’s pilaf and cranberry sauce hiding under there as well.

Not to mention the little spinach dip cracker and the bite-size lemon tart she hoovered up in the buffet line.

So I ask you, mortal, is it really fair to blame the washing machine for the shrinkage in your jeans?