Remember all the fuss with the power tools and racks and seeds?  It has all come to fruition.

The seeds came through their cold nap very well, and the students were able to plate up their seeds.  Well, mostly able.  Despite being instructed to pipette their seeds into a straight line on the Murashige and Skoog medium, some of the kiddos were guided by a certain Jotun who shall remain nameless and just plopped all of their seeds in the center of the agar.  Others, in a demonstration of obtuseness which will live in infamy, carefully pipetted all of their seeds onto the lid of the petri dish.

Still, enough of the little geniuses did it near enough to correctly for the plates, after two weeks in a growth chamber, to be worth looking at.

Sigyn thinks they are adorable and wants to hug them.

The students are using them to study heredity.  One of the parental lines is “wild type”.  When viewed through special glasses under a blue light, the little plants don’t fluoresce and just look like dark shapes.  The only brightness is where the light source is bouncing off the background. 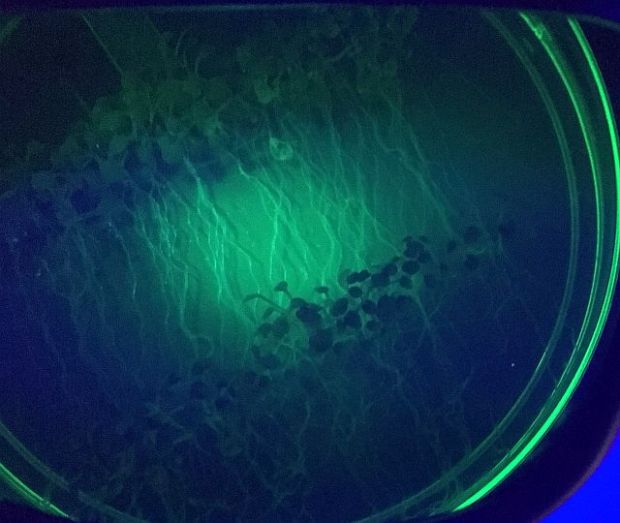 The other parental type, however, has been Meddled With and gifted with a gene originally found in jellyfish.  The plants produce green fluorescent protein (gfp) in their cells.  When viewed with the fancy glasses under blue light, the plants fluoresce–they appear green and are clearly visible– not just shadows.

Theoretically, the gene for fluorescence is supposed to be dominant.  Let’s look at the F1 plants, the hybrids between glowy and not glowy.  All of these seedlings have one copy of the glowy gene.

Great Mendel’s peapods!  All glowy!  Our hypothesis is correct!

Further observation of seedlings that are the result of crossing this F1 generation with itself shows that glowiness is inherited in a 3 to 1 ratio over non-glowiness, thus re-confirming that the gene for green fluorescent protein production is, in fact, dominant.

That green glowiness is a neat trick, I must say.  And yes, Sigyn, the little seedlings are cute.  But let us bring science to bear on the real question raised by this little experiment: What would it take to get this gfp into me so that I can glow green in the dark?