The human female is still waiting for the Missing Bits of her fancy new transilloomini-whatsits.

When they weren’t in the box, she immediately called the account rep from They Had One Mission And Stumbled, who was suitably perplexed.  Yes, the rep said, the Missing Bits were supposed to be part of the unit.  No, they weren’t something that had to be ordered separately.  Yes, she would speak to the manufacturer.  No, she didn’t think the human female deserved to get the whole order free for her trouble.

So the rep did call the manufacturer and ask about the Missing Bits.  The manufacturer was appalled.  Appalled that someone would question the packing and delivery of one of their fine instruments.  Surely the human female had simply overlooked the tiny circle of orange plastic tucked securely into its own bubble-padded envelope admist all the other bubble packing.  And, just as surely, she had also overlooked the 8″ x 10″ rectangle of fluorescent orange plastic which was definitely included.

Um, no.  When I mischief, I mischief good.  The Missing Bits were indeed missing.

Grudgingly, the manufacturer agreed to send replacements.  The human female has been waiting rather impatiently, since the apparatus is definitively useless without the Missing Bits.

A Promising Box has been fetched from the stockroom, where it was just delivered.

Could it be?  It is!  The long lost Missing Bits!

Or one of them, anyway.  Behold the Large Orange Rectangle of Viewyness. 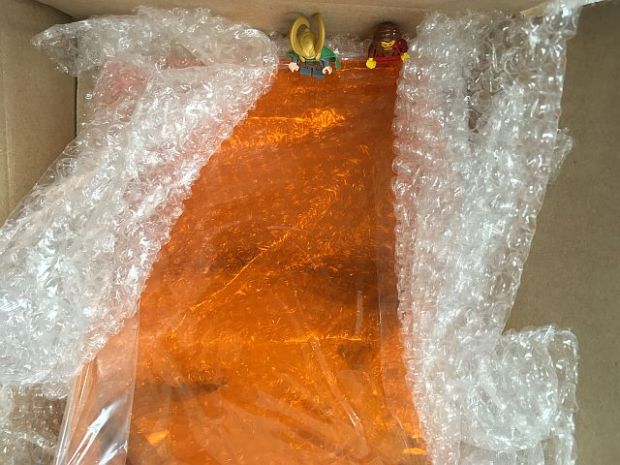 Yeah, I can totally see how one of these could be overlooked in a package.

Is the other, smaller Missing Bit in the box as well?

Clever Sigyn!  You found it!

It is indeed a critical piece!  Without this little orange filter, the ability to photograph the gel with a camera phone is lost, and one might as well not have this apparatus at all.

What do things look like when viewed through it?  What do you see?