Before you ask, I didn’t do it.

Although… I do find depriving the humans of a place to park so that they can go and eat at the fun restaurants in the area vastly amusing.

On Jotunheim, it’s always cold and dark and the miserable inhabitants eat what they can, when they can.  On Asgard, the feasting continues more or less year-round, with sporadic heightened gluttony whenever there is some manly feat of battle or hunting— or, in Thor’s case, counting beyond five– to celebrate.

In this realm, however, the over-consumption of fodder tends to follow the calendar, and we are smack in the thick of Eating Season, which commences with All Hallows’ extorted sweets and continues through the excesses of the New Year.   The high point of all of this, the pinnacle of gustatory omnivory, is the annual Day of Giving Thanks.  It’s such an important occasion that the mortals don’t just arrive there willy-nilly.  No, no, no!  They must needs practice, ensuring that stomachs—and waistbands— are stretched to their fullest capacity in preparation for the gargantuan repast.

The human female’s work group has organized a pot-luck meal.  Believe it or not, this type of meal exists only on this miserable rock.  Only Midgardian hosts are lazy enough to throw a party whose obvious and accepted subtext is, “I want you to come to my affair, but I do not desire the trouble of preparing the entire meal myself.”  The pot-luck also combines the love of food with the love of competition, as all the diners vie for the honor of bringing the Perfect Dish.  It must be pleasing to the eye as well as pleasing to the palate.  It must proclaim how much trouble was taken in its preparation, and it must be served forth in just the right amount.  Too scanty, and its maker is judged stingy.  Too abundant, and there are Leftovers, which implies that the offering was not delicious enough to finish. Perfecting a recipe that ends up with a solitary spoonful remaining in the serving dish is the ultimate goal.

The human female truly botched that this year, as she made enough mashed potatoes for an army of Volstaggs.  Her co-workers have also contributed, and now we are all gathered to judge the relative merits of all of the entries. 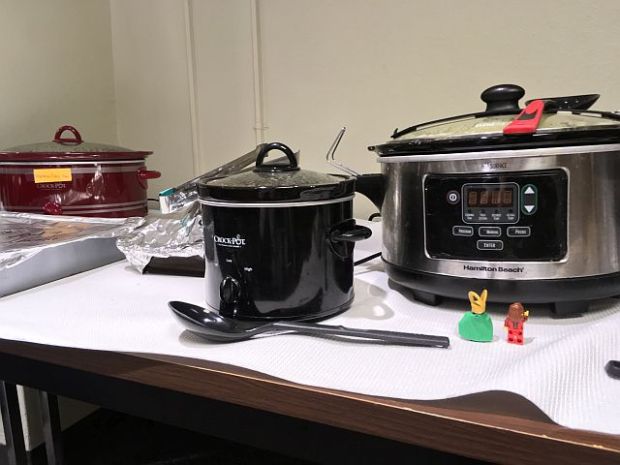 Yes, Sigyn, that is the Cauldron of Never-ending Spuddage. Oh, the shame.  The smaller vessel to the left was also contributed by the human female, who likewise has no ability to estimate the volume of gravy required. 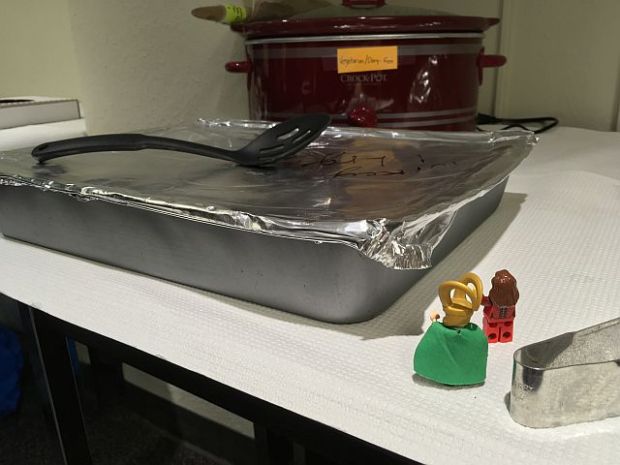 The maroon vessel harbors sweet potatoes, I believe.  I wonder, though, what is in this large rectangular pan. 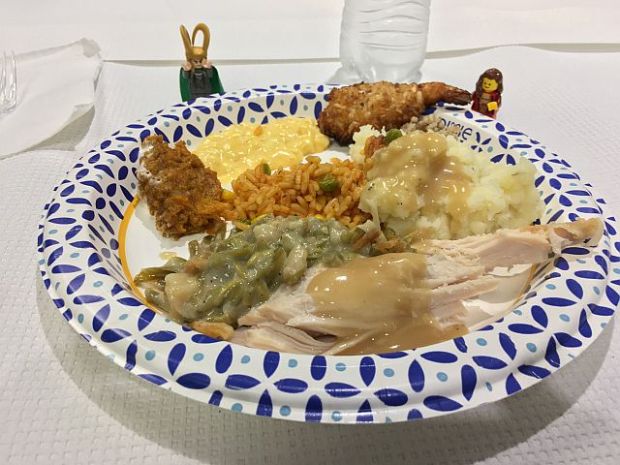 Here is the human female’s (first) plate. Clockwise from Sigyn:  coconut shrimp, mashed potatoes with gravy,  roast turkey, that quaint Midgardian concoction composed of legumes in a creamy sauce topped with fried onions (which is what was in the big pan), rice dressing with meat, macaroni and cheese, and another sort of rice dish in the center.

There you have it, the annual Cavalcade of Carbohydrates.  This is only a subset of the offerings.  The serving tables are also groaning under ham, deviled eggs, two types of roast chicken, corn casserole, some fruit, several pies, and more than one type of cake.  That’s right–nary a leafy green or whole grain to be seen.

And remember:  This is just the practice for the actual day of giving thanks.

This is why I left the business card for Omar the Tentmaker on the human female’s dressing table.