First the tree, then the doorbell, and now the refrigerator.  The humans tried very hard last night to find a new one.  One store was already closed for the day, one was closed for the weekend, and one was letting in customers only by appointment.

Frantically, they started looking online and were immediately confronted by a dizzying array of sizes, door arrangements, colors, freezer positions, and purchase options.

Then they discovered an unforeseen side-effect of the current pandemic—it is impossible to just buy a major appliance.  Everyone is home, so more people have been trying to make their homes better–apparently by buying up all in-stock units.  Supply chains have been disrupted.

They did drive out to the one still-open store.  The human female went in to look while the male sat in the car on the phone, speaking with a customer representative for a different company, trying to find out what, if anything, was available in the short term.

The female found two refrigerators that would suit, but the nearest delivery date she could get was twelve days out–if she were lucky.

Back to the house, back to the computers, frantically checking delivery dates, installation fees, and customer reviews.  They finally found one that should be here in about a week–and they bought it, sight unseen, which is terrifying, if you think about it.

So now it’s today, and they are faced with the fact that the old fridge is not going to make it to the end of the day, let alone until next week.  More ice, more ice chests, more weeding.

The male thought of a partial solution.  He went out and has returned with a mini-fridge that will keep the critical things cold. 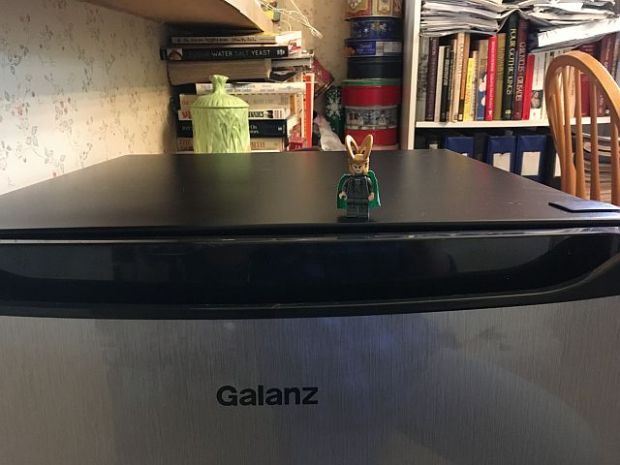 Hmm. It would be better if the door opened the other way.  This necessitates removing the hinges, the door, the leveling feet, and some other bits of hardware.  The removals on the top of the unit are easy enough…

But getting the bottom door hinge off when the directions say not to tilt the unit more than 45° or risk! damaging! it!—THAT is going to be less fun.  For them, anyway.  *I* am enjoying myself thoroughly, watching both of them lying on the floor. The female is actually mostly under the dining room table, tilting the fridge about 44.5°, and the male is struggling to get a screwdriver in the space between the unit and the floor.  Not easy when you can’t exactly see the screw head… 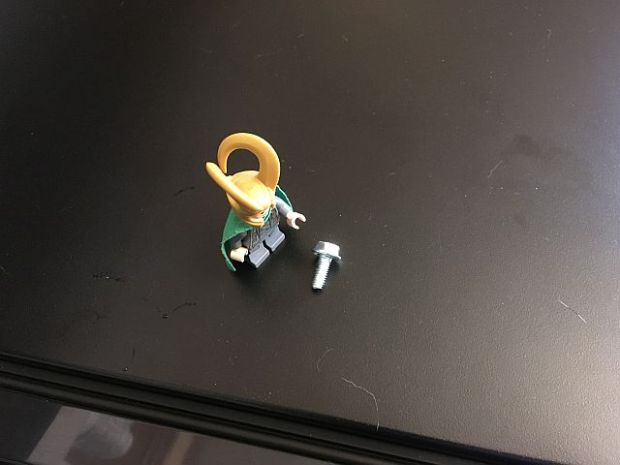 (time passes) The new little unit should be cold now.  So…the “critical” ice chest items go into it, and things that have spent the day in the dying refrigerator but won’t fit in the new fridge need to go into ice chests as well.

Volstagg’s waistcoat!  You people have a lot of condiments! 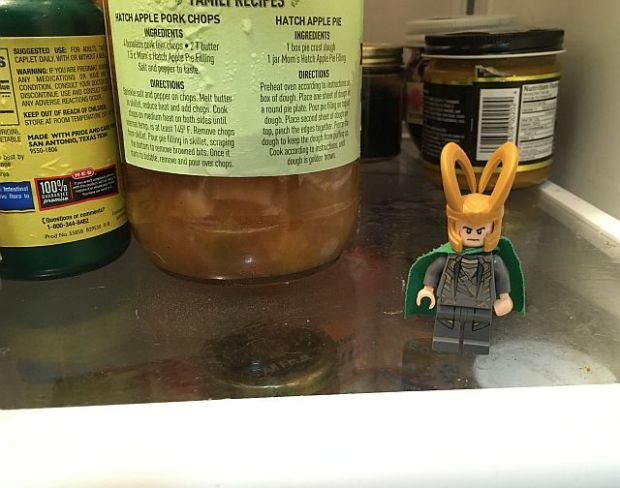 They’ve done a mini grocery run to replace some things that spoiled.

The countertop is still a mess. 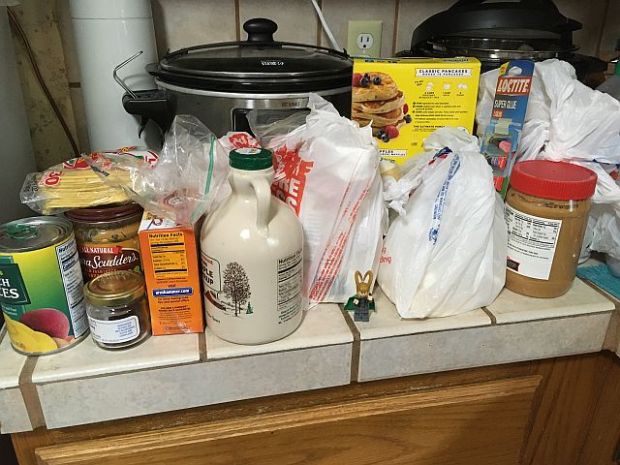 The ice chests will need new ice or cold packs every so often, so they’ll need daily attention and a rotating cycle of cold packs through the large freezer.

Not to mention there’s not room anywhere for a pitcher of orange juice.

They’ve re-written the weekly menu to use up things that came out of the dying freezer and to avoid buying big things that need refrigeration.

They’re learning to deal with zero counter space.  They’ve determined that the mini fridge did not exactly keep tiny pints of self-pity ice cream solid at the setting they had it at.

They’re going to have to rearrange the living room to maneuver the new fridge in and the old fridge out.

And last but not least, they are going to have to unhook the water line for the ice maker from the now-dead fridge.  When a valve has been in one position for a while, the awful water around here tends to freeze it in place.  If they can shut what needs shutting without breaking the valve in the process and flooding the kitchen, I will greatly surprised.

It’s going to be an interesting week.