I think there must be a planetary alignment/swap or something, because it’s hot as Muspelheim outside. Sigyn and I, wanting a little diversion (or in my case, wanting to get as far away from the human female as possible!) have opted for something indoors, cool, and slightly educational.

There are fish here of all shapes and sizes.  It’s hard to get good photos, because they move so much.

This fellow is broad and stripey.

Make that narrow and stripey.

And this little guy looks worried.  And well might he be!   It is lunchtime, and he’d fit quite nicely on a cracker.

One fish, two fish, red fish, blue fish.  Plus that yellow one.

This one looks decidedly put-out.

Odin’s Eyepatch, Sigyn!  Look at this one!  He’s all spiky and has a fold-uppable fin-thingy on his back.  He’s the Swiss Army Knife of fishes. 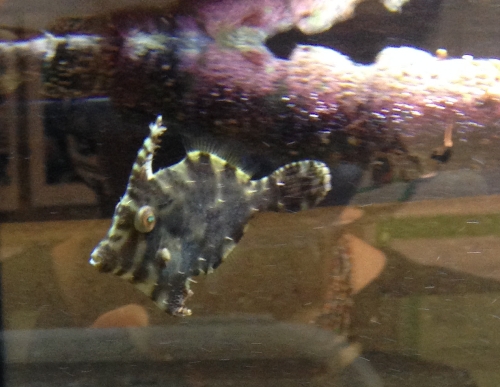 Sigyn likes this one, says it looks as if it’s smiling.  It is also sporting the University’s preferred color scheme, maroon and white.

There’s supposed to be a blue wrasse in this tank too, but I don’t see him.  The little sign says they like to sleep burrowed in the sand, but that can’t be right.

(tap, tap, tap)  Hey fishes!  You’re so stupid!  Swimming back and forth and around and around and I don’t know if anyone told you, but you’re not actually going anywhere. 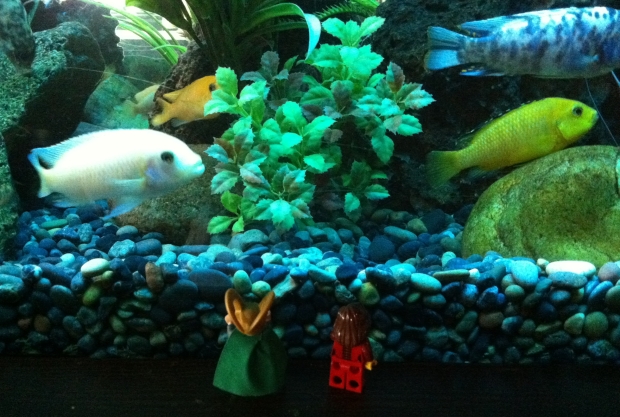 Argh!  By Fandral’s Mustache!  You know how Sigyn has that unfortunate maladay that renders her physically incapable of not mooing at every cow she sees?  Apparently now I’ve caught the disease and am talking to fish!

That probably means it is time to take a little break.  Let’s go get some lunch, Sigyn.  I hear the aquarium has a great seafood restaurant.  You can order whatever you like.  Personally,  I am in the mood for some ceviche.