It is Autumn here in the northern part of Midgard–or at least, that’s what the calendar says.  I’ve been tinkering with the weather, alternating hot and cold days so that everyone has the sniffles and no one knows what to wear or what to serve for dinner.  Woolly hat or shorts and flip-flops?  Cool salad or hearty stew!  Ehehehehe!  The mortals are all cOnFUseD and there’s no end to the see-sawing in sight.

But, by the calendar, the rare plant that the human female discovered, and which she keeps an eye on, ought to be blooming.  She’s grabbed her boots and sunscreen and insect repellent and is heading for the outcrop in the next county over where the plant is to be found— if it’s up.  It is one of my warm days, and I could certainly do without being cooped up in the car with the human female for twenty minutes each way, but Sigyn really, really likes “botanizing,” so she is going.  And if Sigyn is going, I am going, because I don’t trust the human female in the field one tiny little bit.  With me along, there’s a much better chance that my sweetie comes home in one smiling piece.

And here we are at what the human female calls, “an outcropping of calcareous Oligocene sandstone of the Oakville formation” and what I call, “a tilty chunk of inconvenient climbiness.”

The first plant to greet us is the very conspicuous, electric blue dayflower.  It’s fairly common in this part of Midgard.  There are even some back at the house.

They look better out here than coming up around the compost heap, though.

The human female is checking to see if the “usual suspect” plants are up where they normally are.  The redwhisker clammy-weed is right where it is every year.  The bright sun is washing out the pale pink of the petals and the bright red of the stamens.

It really is very sticky to the touch.  Sigyn, be careful as you go—I don’t know how well the sticky comes out of red velvet.

Ugh.  It really is uncomfortably warm and bright today.

Here is a plant I don’t recall seeing out here before.  Look at the fat, funny leaves!  The human female says it’s a cousin of the moss roses that people grow in pots.

Step into the voluminous shade the human female is casting, and let us see if we can get a better photo.

Those really are tiny flowers!  Sadly, too small for Sigyn to try on as a hat.

Great Frigga’s hairpins!  If you thought that was a tiny flower, dearest, come look at this one!

“Heliotropium tenellum.”  It just rolls off the tongue, doesn’t it?

This one’s not much bigger.  It’s one of the broomweeds, the human female says, either Gutierrezia texana or Amphichyris dracunculoides.

I’m of the opinion that if she’s going to call herself a botanist, she should KNOW which one it is.  She’s making noises about tiny “pappus” this and “receptacle” that and saying that she needs to look at various bits under a microscope.  Flimsy excuses, woman, and if you need a microscope, you bring it on your various traipse-alongs, because I am not going to tote it for you.  Nor will I waste my magic summoning something you should have thought of in the first place.  Besides, I think you make up all those slanty, sciency names anyhow.

Time for some climbing!  Autumn is definitely the season for yellow daisy-family things, and here is another.  If you can believe the human female, it is part of the whole golden aster mish-mash, and it goes by the improbable name of Heterotheca subaxillaris.   The common name, camphorweed, is much less of a mouthful.

Sigyn, after sniffing its gland-dotted foliage, confirms that it does, in fact, smell a little granny’s-closety.

Stand over there next to that pale purple one, my love. 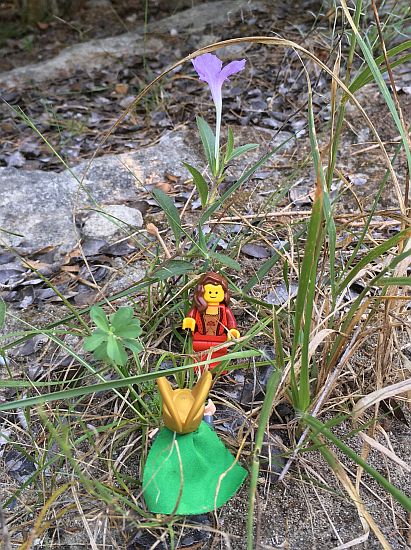 Look at that!  The flowers are more than a Sigyn long!  If it didn’t have just the one blossom, I would pick it for you and make you the pointiest hat ever!

Norns’ nighties!  Are we really only halfway up?  This hill goes on forever.

Suitably fortified with spring rolls and bobba tea (I’m still not sure I trust those little black chewy things at the bottom) we are all ready for adventures.  But ugh!  Is it ever HOT.  I think I might like to adventure in an ice rink—the human female once went ice skating in this city, someplace downtown.  Of course, she’s too feeble-minded to remember WHERE, so we will all just have to roast.

Oh.  Well.  At least we are going to do indoor things today.  But Odin’s Eyepatch, people, does it have to be art?  I am not in an “art” mood.  I don’t want to be edified or uplifted, I am on vacation.  I want adventure.  I want thrills.  I want excitement!  I want—

—never to meet this gentleman in a dark alley.  He is properly fierce!  Well, as fierce as one can be with bows on their shoes and pumpkin pants…

who, though separated from him by several hundred years and the Bay of Biscay, would appear to be his sartorial relative.  (Or Sartoris relative.  Ehehehehe.  Art joke.)

The human female quite likes this next one, though I have no idea why.  She says it reminds her of the bridges in London (despite the fact that it was painted by a Frenchman) and that it “neatly captures one brief moment on a foggy morning and a little slice of city life; how the three figures, though occupying the same space, are separated from one another by class and preoccupation with their concerns.”

Snort.  What a lot of pretentious twaddle.  Probably she likes it because it is mostly blue.

Up close, this next one is a mish-mash of quickly-slapped on brushstrokes in varying shades of gray.

From a moderate distance, it does an astounding job of capturing the light on a quiet winter morning.  I can practically smell the wood smoke on the frosty air and hear the snow crunch under the old woman’s feet.  Looking at it more closely again, I see that I was right the first time.  It’s little slaps of gray paint.  Hmmm.

This next one is all slappy as well, and presents a street scene in colors not found in nature. 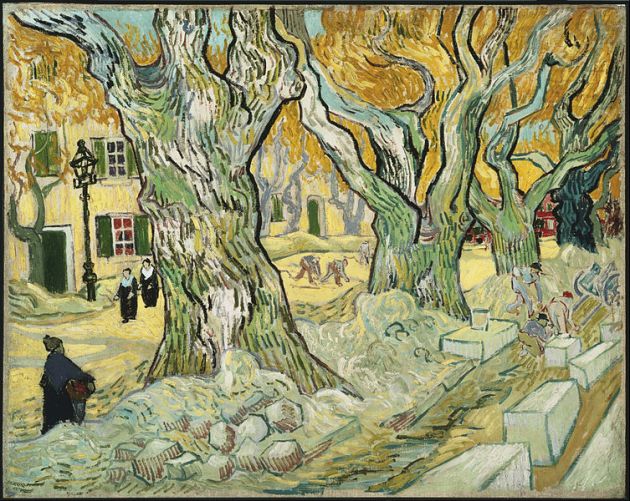 Supposedly, it is very valuable and shows “mastery in its use of yellow, an uncommon color for landscapes.”  Probably uncommon because if you were to put this thing in your living room, you would need to redecorate so as not to clash with it.

We have now wandered into the section of the gallery devoted to art from the Eastern portions of this realm.

Sigyn thinks these gibbons are funny. 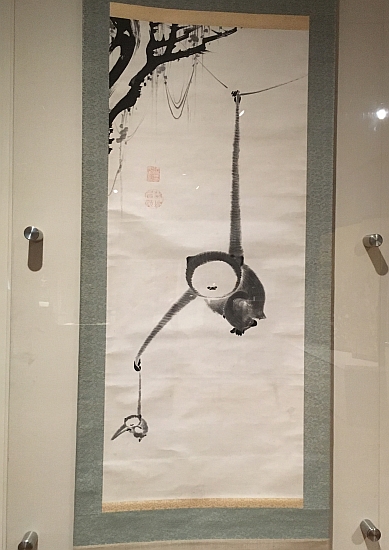 I think that if a human mother dangled her offspring like this simian is doing, there would be authorities involved.  Still, it rather makes me wish that there were a tame and willing gibbon in our household, because those long-reaching arms would be perfect for getting things out of the tops of the kitchen cupboards.

The human female and Sigyn are in raptures over this gold and floral folding screen.  There is some serious plant-squealing going on!

The human female is peering at the flowers and making squeaky noises because, apparently, they are painted with such skill that they can be identified by genus.  She is particularly excited about what she says are little blue dayflowers:

Sigyn is quite familiar with dayflowers.

Ehehehehehe!   By Sleipnirs eightfold fetlocks!  This is splendid!  The human female has become so enthusiastic, peering closely and pointing and squealing that she has been asked by the guard to step back or, preferably, leave the gallery entirely.

I always said that too much botany would get her into trouble someday.

Having left the art museum, we are in search of one of those large markets that the humans are so fond of.  Their intent is to buy something interesting for dinner.  But first, a visit to a store that specializes in things to hold…other things.  The human female is enthusiastically telling the male (who has never been to a store of this chain) that it is a wondrous, yet dangerous place. 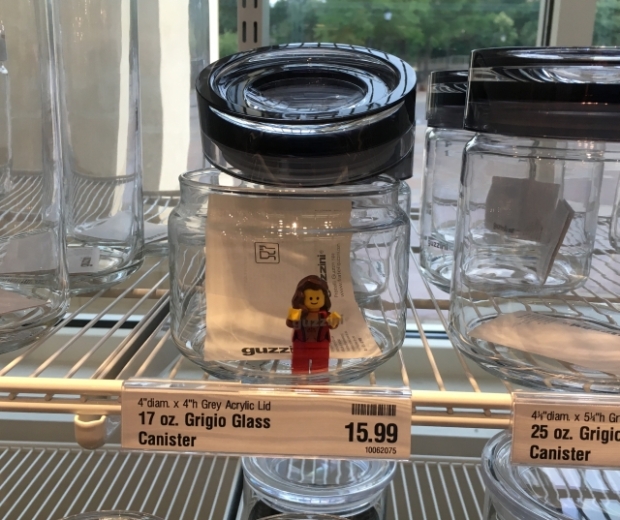 Hang  in there, sweetie, Loki’s coming.

Now we are a the large market.  Sigyn approves their horticultural offerings.

She is also entranced by these heirloom tomatoes.

Beloved, you may not want to hug these weird things.  I am fairly certain that a good few of those do not conform to the usual spectral specifications for berries of the genus Solanum.

Moreover, I am reasonably certain that this is not a tomato. 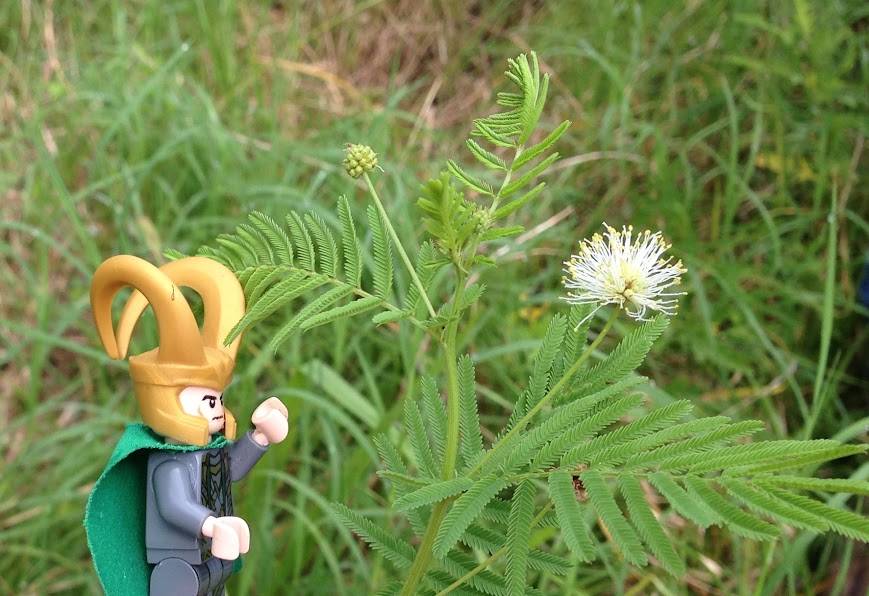 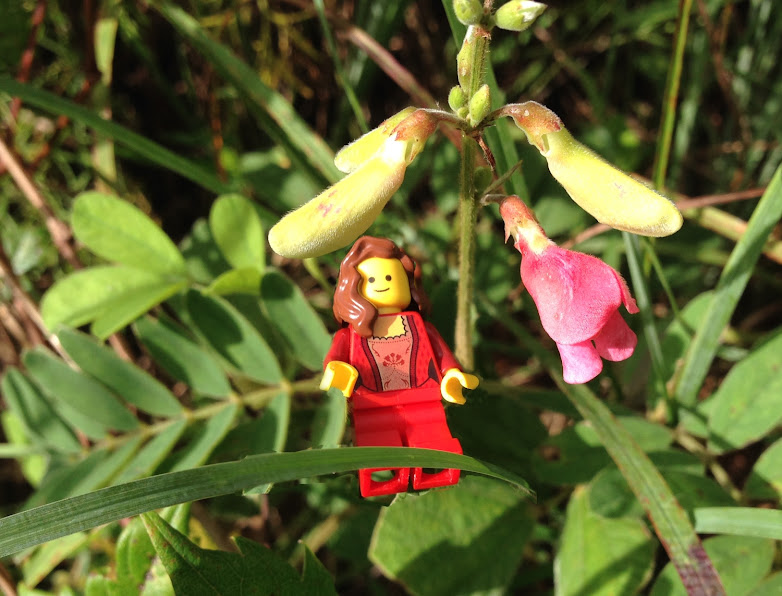 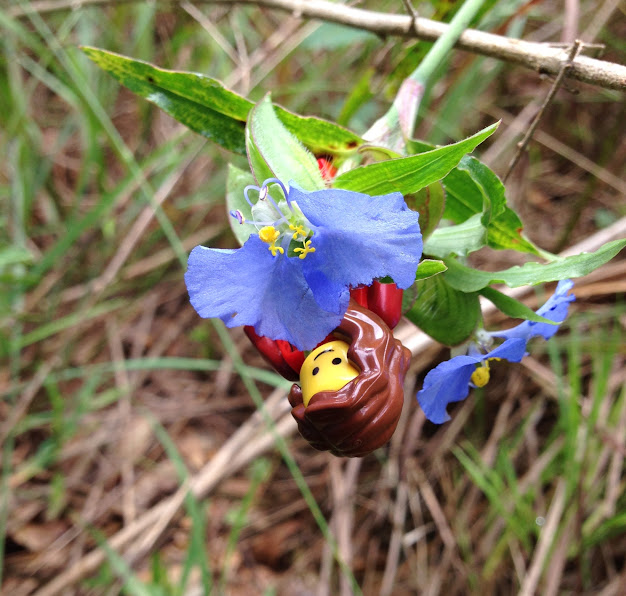