My oafish brother Thor gets all the credit for being able to influence the weather, but I do pretty well.  Which is why, when the humans planned to a) visit a church with exceptional stained glass windows and b) explore the city’s other large botanical garden in one of the southern boroughs, I magicked up a cold, soaking rain.

It is even more of a delight traveling about the city today, because for some reason (innocent whistling) most of the trains that run between Manhattan and Brooklyn are not doing so.  This necessitates a switch to a different line and frequent consultation of the subway map.  And much grumbling.

Ehehehehe!   The human female chose to wear a skirt today, and her fancy shoes, and now she’s all soppy-draggly about the hem.  The church photos are dark and dreary, and tempers are beginning to fray.

Now we are all standing, under umbrellas, on the church porch, waiting for…  I don’t know what.  Now there’s a minivan pulling up, there’s a man getting out, and he and the human female are hugging!  And the human male is just standing there!  WHAT IS GOING ON?!

Oh.  Apparently this man is an old house-mate she hasn’t seen in thirty years.  He lives here and they arranged to meet up today.  Poor fellow, I’m sure he wasn’t prepared for how gray and saggy she’s become.  That’s like to ruin the brunch we’re all headed to have.

So here we all are.  The old housemate has come with his wife and grown up daughter.  They are all going to sit around and talk about the “olden days” and “how much the old home town has changed” and “how awful the traffic is in New York.”  Go ahead and reminisce and blather on, people.  I’ll just eat your omelets while you do.

Bleargh!  By Idunn’s little green apples!  Who puts spinach in an omelet???

Since the rain shows no sign of abating, the former housemate has suggested that we visit a nearby museum, rather than the botanical garden.  This idea has been approved.  Now we just have to figure out which combination of one-way streets will actually bring us to this destination.

Goodbye, former housemate!  See you in another thirty years.

This museum features a suite of rooms taken from some fancy historical house.  I find old furniture and knick-knacks yawn-inducing, but Sigyn is charmed by the tiny replica of the house itself.

Too bad it’s behind glass, my love, or you could explore the miniature garden.

By Thor’s bitty ballpeen!   Is everything in this city for sale?  The entire Egyptian wing is closed to the public today, having been rented out for a private function.  This is beyond infuriating.  When I come to rule this miserable rock, I will have instant access to anything I want, whenever I want it.

One of the exhibits we can view is dedicated to the color blue.  The staff have assembled an assortment of blue items from the various galleries.

Sigyn, of course, has gravitated straight to the glassware.  There are no paperweights, which are her favorites, but this footed dish is nice, I suppose.

This pair of recumbent equines has also caught her eye.

She has named them Tweedledee and Dumbledore.  Dearest, I think you may be mixing your books…

Oh, ho!  Now this is something!

I am quite smitten with this little pagoda-throne.  I need only oust the current occupant so that I may sit as regally as befits my glorious behind.

(later) We were all museumed out.  After retracing our public transit steps and stops and false starts back across the city, we have changed into dry clothes and ventured out for dinner.

We are all of us quite fond of dim sum, and we have found the narrowest little hole in the wall in which to eat some.  Truly, we are seated in what most people would call a hallway,

We shall have to content ourselves with these roast dug egg rolls, pork buns, and other tiny dumplingesque offerings.

We have also tried the soup dumplings, which we did not photograph because they must be eaten whole, in one bite, lest one end up wearing half the soup.

Yawn!  It has been a long day.  The humans accomplished about 50% of their goals, and the weather is too sloppy to try for the top of the Very Tall Building again.  I count that as success.

It’s time to cook all the little stuffies the humans brought home from the market.

It’s a double-decker sauna, so there will be room for the shoe thingies as well.

I hope they’re prettier when they’re cooked, because that raw-looking, fishy-pink filling is sort of grossing me out.

The little pot-sticker dumplings are having a hot bath of their own.  Careful, Sigyn, that pan is likely quite hot!

The lumpy cylinders are in the oven and will have to be turned halfway through their cooking time.

All done!  I fiddled with the sauna, so the goodies in there took much longer than anticipated, but everything is finally ready.

… but their innards are still tasty!  Mmm.   Porky bits.

The little dumplings and the Lumpy rolls came out all right, though, so we will not starve!

Let’s open the package of tiny moon cakes. The humans bought these because they were TOO CHEAP to buy one of the fancy gift boxes of cakes from the display  near the checkout.

Hmm.  Like the red and green color scheme, but somehow I don’t think this is a seasoning or icing packet…

Think the humans will eat it if I tell them that it is?

Let’s try one of the purple cakes.

Nom nom nom.   The first ingredient is sugar, isn’t it?  How many little adzuki beans gave up their tiny lives to make this sweet?  They might have died in vain, because there isn’t really any beany flavor.

This is truly a  most inscrutable comestible!  I have poked it.  I have tasted it. I have read the list of ingredients thrice over—and I still  have no idea what flavor this is supposed to be!

The humans are celebrating…something.  They didn’t start out to do it.  No, they just decided that dragging Sigyn and me along and meeting up with the blue-haired goddaughter at one of the local grocery markets to pick out a variety of “fun things to eat” sounded like a good idea.   Then when they got there, they discovered that some of the local populace are celebrating the moon, because it’s August.  Or maybe October.  Except it isn’t.  It’s September.

I do not know what its going on. When I take over, I am going to straighten this whole calendar mess right the heck out.

This is a very… unusual store.  Even my Allspeak isn’t up to translating all the labels.  Why can’t everyone use runes like civilized peoples do?

Sigyn, there are some truly bizarre items on offer here.  Do you want to try the fish meat sausage with cheese?

Me, neither.   I’m just ready to go home—and come back another day with a camera, because I KNOW no one will believe me about the fish meat sausages.

Safely home!  Let’s see what the humans did buy.  There is quite an assortment of packages.

Ah. Stuffed bao.  We have had these before and liked them!

They won’t be the same as ones brought out by a smiling waitress in a little steamer tray, but they will probably taste good.

The package says these are Lumpy…

Well, there are some crispy-looking little blisters on them as a result of delicious frying, but I wouldn’t call them lumpy.  Humans are weird.

Shoe-mai?  I hope they are not made of real shoes!

I’m  sensing a theme here.  These are all stuffed things.

The humans are fetching down the bamboo steamer, oiling up a frying pan, and heating up the oven.  Twenty minutes or so from now, we should be feasting in style!

And look!  There will be more stuffed things for dessert!

The humans have a holiday from work today, so they have picked up a friend and driven to the nearest large city. But ehehehehe! I whispered in the merchants’ ears, and all the shops they wished to visit are closed! No fountain pens or quilt fabric for YOU!

They are consoling themselves with dim sum. While we wait for friends (including the female’s Kinttery Friend) to meet us, Sigyn and I are exploring the windowsill forest.

Ah, the friends have arrived and we are feasting on various nibbly dumplings, stuffed puffy dough balls, things cooked in leaves, and tarot balls with miraculous prognosticatory powers. I will make a prediction: the humans are going to be devastated when they learn that this restaurant is closing next month. Wherever will the human female get her Woo Gok fix now?

This cuisine appears to feature many dishes based on the principle of the sofa cushion. Take this one, for example.

Soft, pillowy dough outside and some sort of savory filling. The human female calls these Charred Shoe Buns. Surely burnt footgear is not actually among the ingredients? Sigyn, I think I’d give this one a miss, unless you need something squishy to nap on. 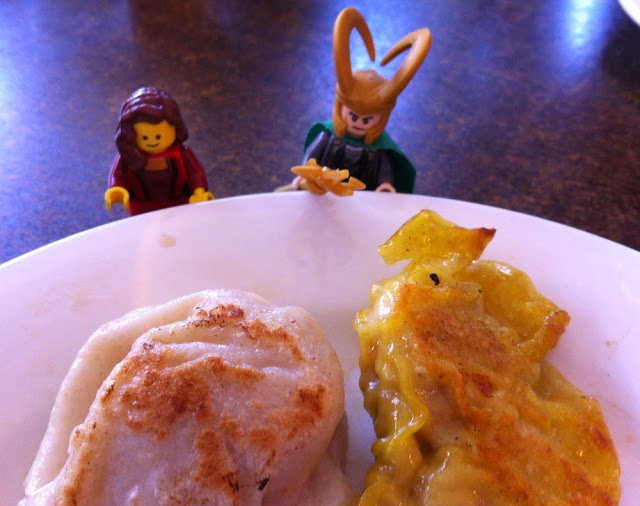 The Midgardians ordered some shrimp-stuffed tidbits and some pork-filled nibbles. I can’t tell which is which, can you? Perhaps I should consult the Tarot Ball…

Oh, my. What is this? <poke, poke.> It’s covered with seeds and is piping hot. Great Gungnir! It is full of red paste. I did not expect that. I can think of not a few unsettling things that would make a paste that color. Raw liver. Mashed crayons. Beets. 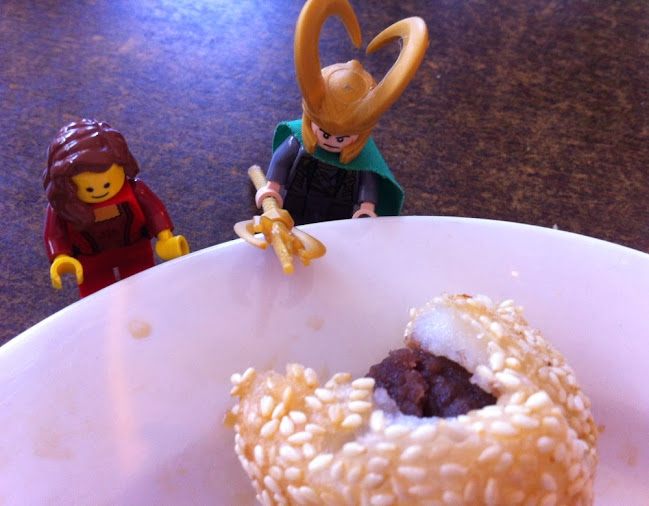 The humans seem to be suffering no ill effects from eating these weird things, so maybe I will try it. <Nibble, nibble.>

The human female says it is a red bean paste. But it’s sweet! Beans, really? Bean-beans, not jelly beans? Bizarre.

Shoes, mystery stuffing, beans. I think I will never understand Midgardian food. But it tastes good!

The humans and their friends are celebrating this lunar Year of the Ram/Sheep/Goat by eating dishes native to the culture.

Sigyn and I are looking at the menu. Even with pictures, I don’t recognize a single dish. This is food?

Chicken feet?! Surely this is an elaborate practical joke. Gwat? What is Gwat?

The dishes have started to arrive. They smell very good, which is reassuring.

The human female calls this “Wu Gok.” She says this translates to “Tarot Ball.” I have studied Midgardian methods of fortune-telling, so I surmise that is both a comestible and a method of divination. That makes sense for a new year— bite into this crispy, wispy fried thing and examine its innards to determine one’s fortune for the coming months. I have used it to make the prediction that the human female will end up with crumbs of this airy, fragile dough all down the front of her sweater.

Sigyn is not so much interested in delicious, bite-size predictatory morsels, or even these tasty roast pork bits, as she is in going around and around on the rotating centerpiece of the table. It’s a meal! It’s a ride! It’s gastromancy!