All of this poking about in lawns has made me hungry.  Luckily, the humans have been invited to try a local Thai restaurant tonight, and Sigyn and I are included in the invitation.  (I’d go even if I weren’t invited.  The humans are not the boss of me!)

The menu is… intriguing. 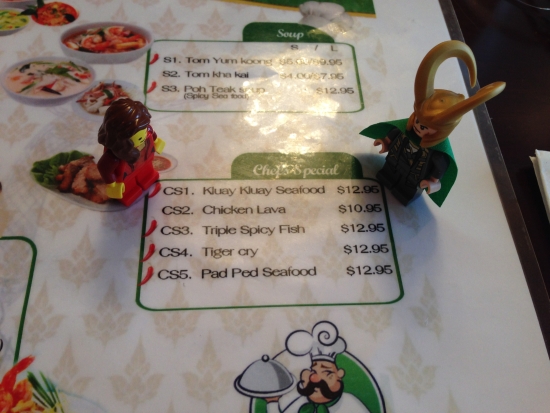 What in the Nine Realms is a kuay kuay?  And why isn’t the chicken lava marked as spicy?  Does that mean the other dishes are hotter than lava?  We should have brought Yelp.  He likes spicy things. 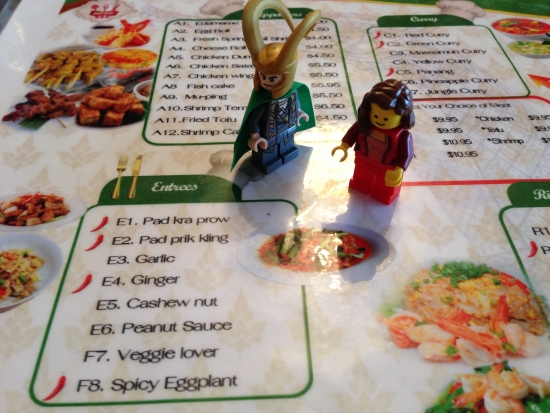 Kra prow!  Prik kling!  I am beginning to think this menu was written by the same fellow who writes the sound effects for comic books.  What do you want to try, my love?

Our hostess has ordered a traditional salad, and everyone gets a taste. Wait–doesn’t salad mean lettuce?  Where is the lettuce?  I don’t see lettuce.  What is this? 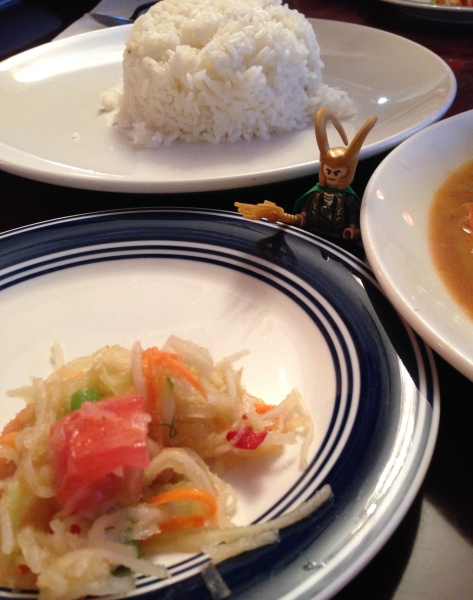 Turns out it is composed of green papaya and a host of other delicacies.  I will wait and see if the human female expires after eating it.  (It is so useful to have one’s own glorified lab rat!)  Look, Sigyn!   No ill effects.  (Nibble, nibble)  This is actually quite delicious!

The entrees are arriving.  The human female, not a big fan of spicy chilies, has opted for peanut chicken.

Mmm.  Chicken and peanuts and vegetables.  It smells wonderful!  Occasionally the female makes good choices.  (I know!  It always surprises me too!) I do believe I detect coriander, lemon grass, ginger, garlic, and cilantro.  There is a lot of food on that plate, so it is probably enough for the three of us. Especially if we don’t allow the other diners to steal tastes.  Back off, people–you had your chance to order this.

I do not know which is more unbelievable–that the humans have friends or that the humans’ friend would drive in from another city just to have lunch with them.  I myself cannot usually be bothered to cross the room to dine with them, but perhaps, as they say, familiarity breeds contempt.  Perhaps the out-of-town friend, not having lived with them, is not privy to all of their not-so-charming little habits.

Ah.  The friend has come to town to watch a football game.  Lunch is just an afterthought.  That makes more sense.   There are other people coming along too.  I’m always glad of an opportunity to study human nature , so the more the merrier.

We have not been to this restaurant before.  It apparently specializes in just part of a chicken–it says so right on the silverware packet. 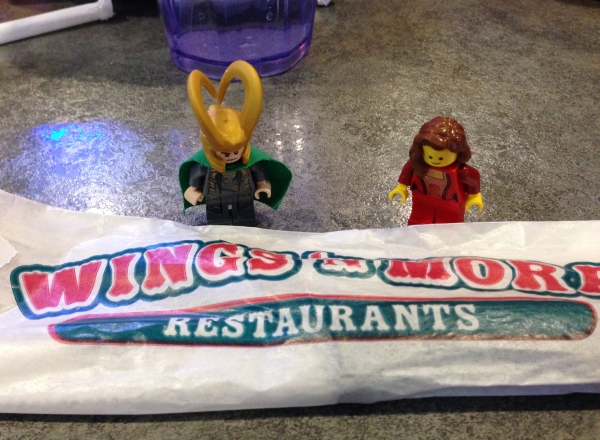 How bizarre? In my experience, the wing is the least edible part of any fowl, except perhaps for the beaks and feet.  No doubt there is an establishment somewhere on Midgard that serves up beakburgers and feet slaw.  I am glad we are not there!  This place is plenty odd enough.  Just look at what they’re touting: 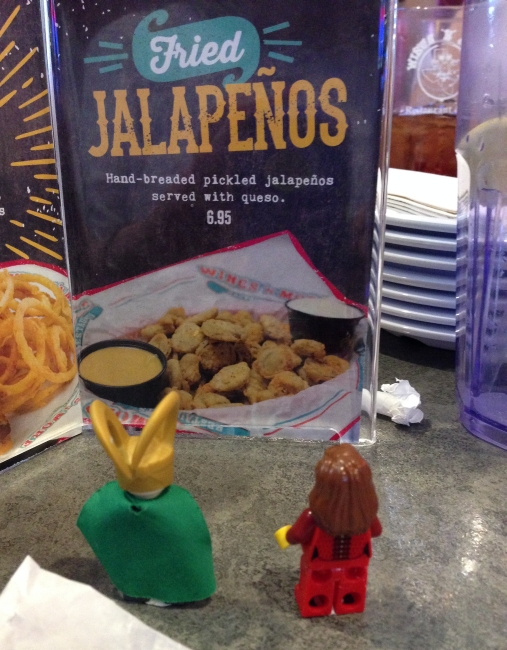 The humans say that they are a delicacy, but surely this is some sort of joke the locals play on visitors!  Be careful, guest-from-out-of-town!  Your “friends” are trying to poison you!

The humans have not ordered the cheesy pickled things and have decided on something called “steak fingers” instead.  Do Midgardian cows HAVE fingers?  Typical of this little backwater planet.  Asgardian cattle have proper hooves. (Which are NOT edible.  Volstagg tried one once and says they’re not, and I believe him.)

And here is the food!   Hmmm.  It consists mostly of fried things, which seems to be the preferred method of preparation for anything except breakfast cereal in this part of the realm. 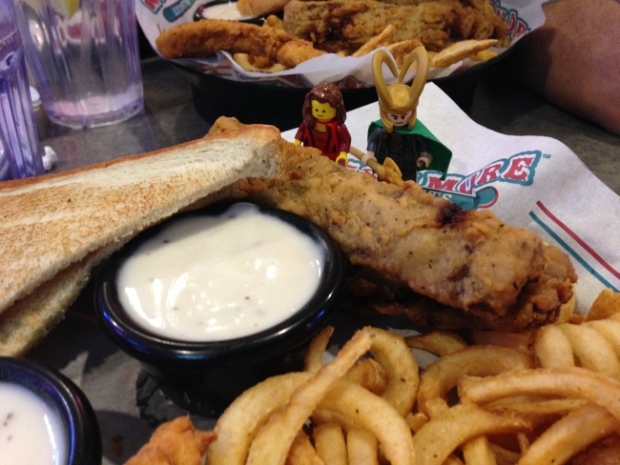 I am quite relieved to see that they are merely little strips of beef battered and fried, served with a creamy white gravy and some thick toast.  Sigyn is very fond of toast.

(poke, poke, poke)  I wonder what these “fingers” taste like? 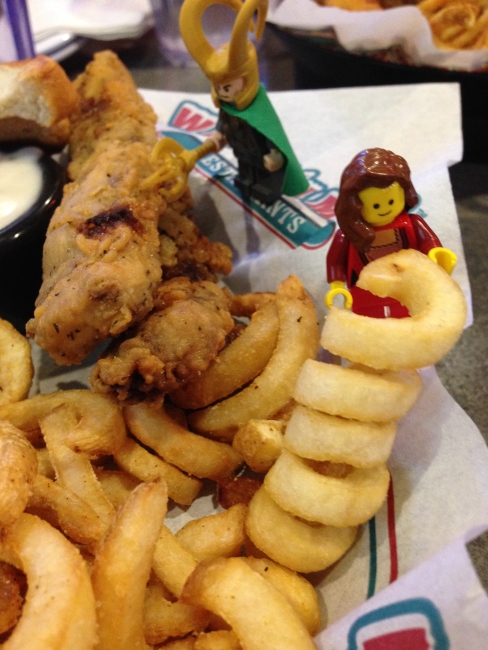 Sproing!  Ehehehehe!  Sigyn is having fun with the curly fried potatoes.  Frigga used to chide Thor and me for playing with our food, but when it’s this silly, I can see that it would be impossible to resist.  Sprooooiiing!

Obviously this restaurant is mis-named.  It ought to be SPRINGS and More!

Last year, my celebration of the Midgardian feast of love and romance did not go very well. I swore never to participate again. This year–Oh, this year I am celebrating with my beloved Sigyn and I couldn’t be happier.

It is customary to dine out with one’s partner on this day, so I have brought Sigyn to one of the town’s nicest restaurants. We had a nice ride over here. (I like it when Sigyn rides pillion–it’s a ride with a built-in hug!) There was rather a wait to be seated, but a well-placed glower convinced the hostess to move us to the front of the line. (I told her Sleipnir was a service animal.) Now we are perusing the menu.

I shall order the Straw and Hay for Sleipnir (without the prosciutto.) Sigyn, of course, zeroed in on the Red Fish. I think I will try the Poblano Mac and Cheese, because I am given to understand that, like a certain god I know, poblano peppers are green and spicy.

While we wait for our meal, we can practice our rock-climbing skills on the brickwork…

…and play hide-and-seek with the tableware. Sigyn, I don’t think the water carafe is as opaque as you think it is.

Nor is the candle holder.

Dearest, come out of there. The waiter wants to light the candle.

This is so romantic. The food is delicious, and the company couldn’t be more charming. Even Sleipnir is behaving beautifully.

There is always room for gelato!