The human female has a regular routine for her orders from the Purveyor of Squiggly Things.  She puts the orders in ahead of time and has them arrive on Wednesday morning of the week before she needs them.  That way, if something goes wrong, she can get a re-ship on Thursday for Friday arrival, because Fed-up an Exhausted can’t do overnight air from Sunday to Monday, and by Tuesday it’s too late–8:00 a.m. labs.  She used to order two weeks ahead of time, but because my BAMN can be counted on to snarl things up somehow, she has moved that out to three to four weeks ahead, so she has time to unsnarl.  Or at least re-arrange the snarls.

So recently she ordered eighteen jars of Hydra, a tiny, freshwater invertebrate with a simple body plan and cunning little tentacles.  Actually, she ordered two packs of six jars each plus two singletons. Cheaper that way, but making two line items in BAMN for double the fun.  BAMN suggested she was ordering HYDRAulic machinery, so she had to settle for the “Biology Materials, subcategory specimens and cultures (not microbial)” code.  That’s pretty specific–the Department seems to be ordering a lot of “Miscellaneous” lately…

So, anyway, the Hydra arrived bang on schedule, and they were gorgeous!  Fat and happy and lively and budding. Tuesday, though, they were all stone dead.  Passed on to some Protostome Valhalla.  Cue funereal dirges.

Well, since it was Tuesday afternoon before the human female was informed of the mass suicide pact, when she called the Purveyor of Squiggly Things, she was told that thehad missed the window for shipping Tuesday for Wednesday arrival.  They did, however, promise to ship Wednesday for Thursday arrival, so at least the Thursday labs could see live Hydra.

So what does one do with sixteen jars of now-unneeded Hydra? Labs are over for the week, and it is now Spring Break. 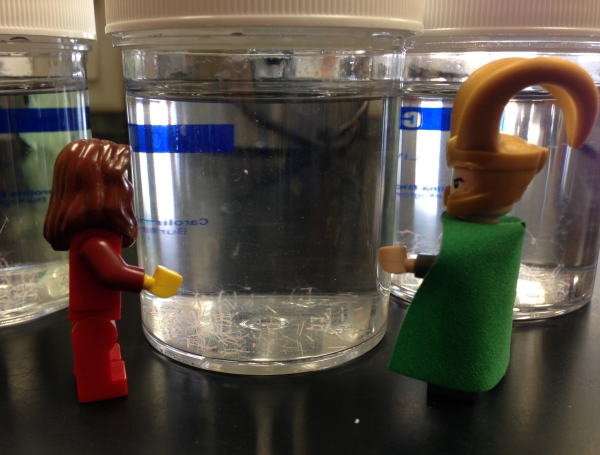 Well, if one is Sigyn, one squeals at how cute and tiny they are.  Then one plays Funhouse Mirrors with the jar’s refractive properties. 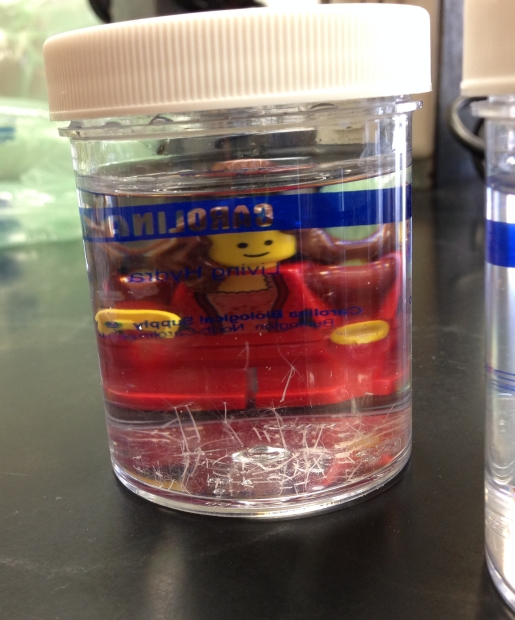 Sigyn, my love, you appear to have two of each shoulder.

If you are the bloody-minded, science-driven human female and her Prep Staff, you set up an experiment with four treatments.  Eight jars go into the regular animal room at 72 degrees F, and eight go into the walk-in cooler at about 38 degrees F.  Four jars in each location remain unfed, and four will be served with the leftover live Rotifers left from this week’s labs.  (They’re the only things on hand small enough for Hydra to eat.)  We shall see what conditions they prefer, so maybe the next batch will survive long enough to actually be studied by students.

In the meantime, this semester’s students have had to content themselves with this truly amazing video of Hydra tearing itself a new mouth any time it wants to eat something.