Once upon a time, the human female brought home some tiny cookie pups.  Sigyn, bless her warm and squishy heart, befriended hers instead of snacking.  I’ve always viewed this as a lost opportunity.

Today, the human female, already regretting eschewing the sweet siren song of sugar for Lent and kicking herself for not chomping her way through all her Christmas goodies sooner, has grudgingly ceded to me another package.  This one is a box, though, not a bag, and it doesn’t say “Mini” anywhere. 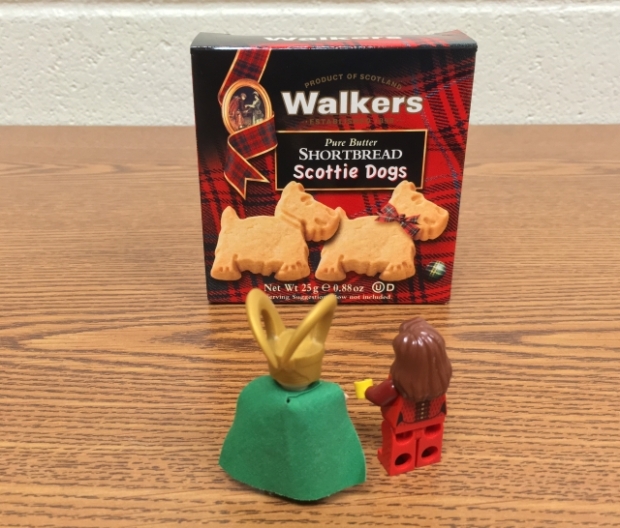 I wonder how big they actually are?  Sigyn, are you ready to find out?  (I would like to wait for the human female to be around so that I could eat these in front of her and make little moany and smacky mmmmmbuttterrrr noises, but Sigyn says that would be mean.  My point exactly.) 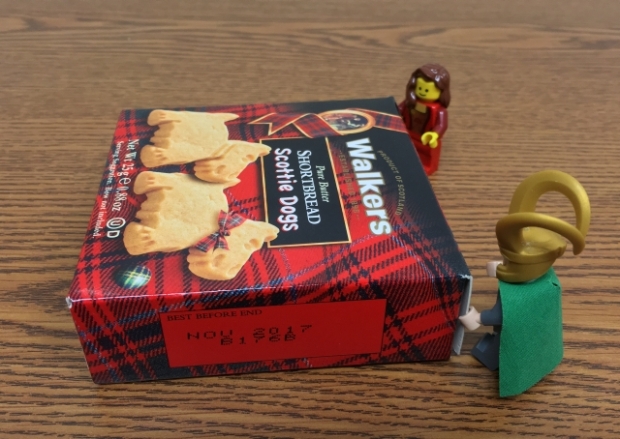 You pull that side of the flap and I’ll pull this one.

By Volstagg’s straining belt buckle!  They are definitely bigger.  But there are only two of them.  No inviting friends over for snack time this year.

Grrr.  This plastic is quite resilient.  Sigyn is quite concerned.  Never fear, my love, I shall use my dagger to open it up.  So the doggies won’t smother?  Uh, yeah.  That’s it.

Hello, scotties!  You are free now! 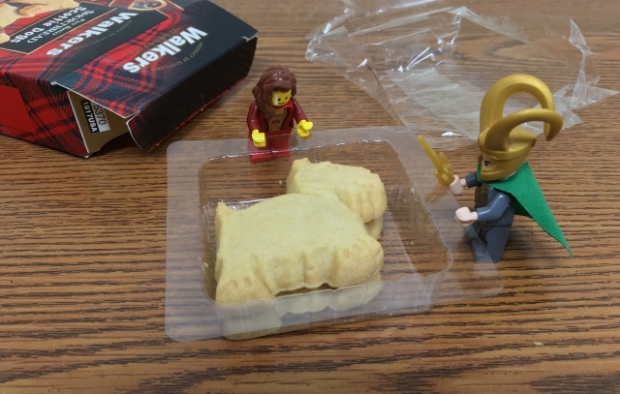 Sigh.  Sigyn, are you going to make friends with this one too?  What’s that?  You think that since one of them is a girl and the other is a boy they should get married so we can have lots of little shortbread puppies?

Yesterday was the birthday of one of Midgard’s most famous rulers, the Queen of England.  (Actually, there’s some confusion about her actual natal day, but I say, if you’re a crowned potentate, you can celebrate whenever you darn well please.)

In honor of the royal birthday, the local import shop had a sale on all British merchandise.  The humans lost no time in stocking up on “biscuits” and ginger beer.  I’ve no great interest in ginger beer, but Sigyn and I are both quite partial to all members of the biscuit-cookie family.  It took a bit of ferreting, but I’ve found where the human female hid them.  Time for a snack!

This is the sole remaining specimen of that noble breed, the Jammie Dodger.  How dare she eat them before Sigyn and I could get to them!  You can see that it says “Full of jammie mischief” right on the label.  Clearly these were meant for ME!  Sigyn, I will share this last one with you before it dies of loneliness, bless its little jammie heart.

There is also a bag of little shortbread canines.  (Make up your mind, Limeys!  Biscuits? Cookies?  Bread?  Pick one and stick with it!) 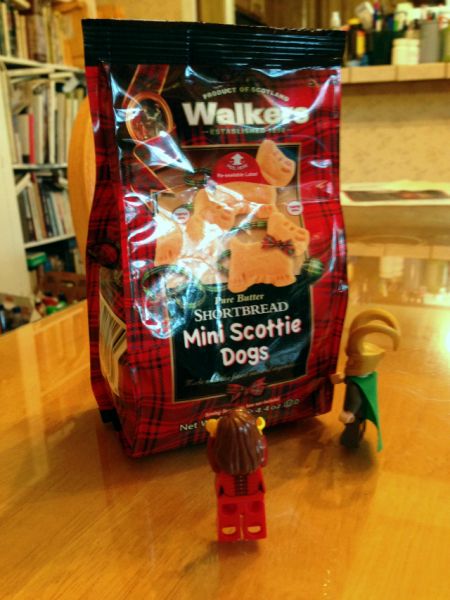 The label says mini.  I wonder what size they really are?  What can you see, Sigyn?  How do they look?

They are, in fact, mini.  One might almost say they are perfectly sized for Sigyn… 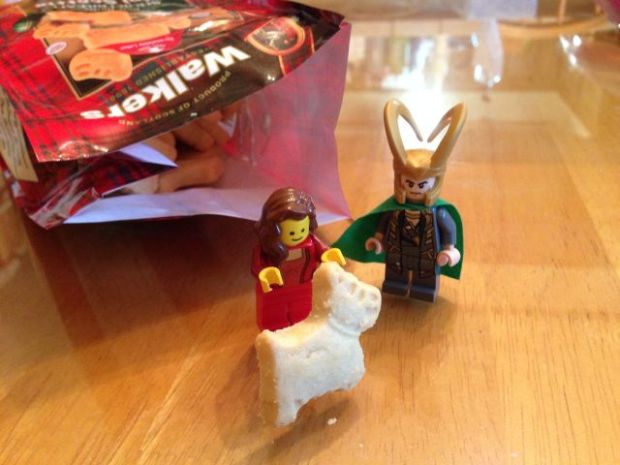 …to want to make pets of them rather than eat them.  Sigh.  This happens a lot.  It’s food, dearest.  Shall I call some friends to help us with them?

Yelp seems similarly enamoured.  Muffy has already taught her doggie to play dead.  Isn’t anyone going to EAT them?!  I, of course, have no such compunction, as you can tell by Headless Hamish here.

Benno is certain his is rabid and will go down in history as the first person ever to run away from shortbread.