It seems as if ages have passed since Sigyn and I accompanied the human female on her botanical expedition to the bog in the next county over.  We got muddy and collected a whole fat press full of plants, Sigyn had a wonderful time, and I got to laugh at the human female when she got her boots stuck in the muck and almost fell in.  I thought that was an end of it.

Apparently not.  The human female spent several long evenings identifying plants, and today she and another botanist are having what she calls a “workshop” with some of her fellow-bog-trotters, teaching them some identification skills.

The visitors have a preliminary plant list, made from tentative identifications in the field. 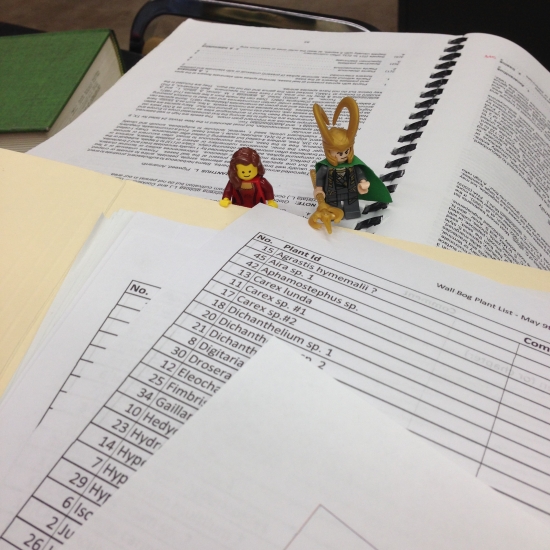 The”experts” are supposed to fill in the holes and answer some of the questions.  (The idea of the human female as an “expert” anything makes me laugh, but I suppose she does know a thing or two about plants.)

Sigyn has the list of grasses and grass-like plants.  The human female can identify those, but her colleague is better.

No, the human female has identified all the things with showy flowers.  Now she is making her students key out a few of them as practice. 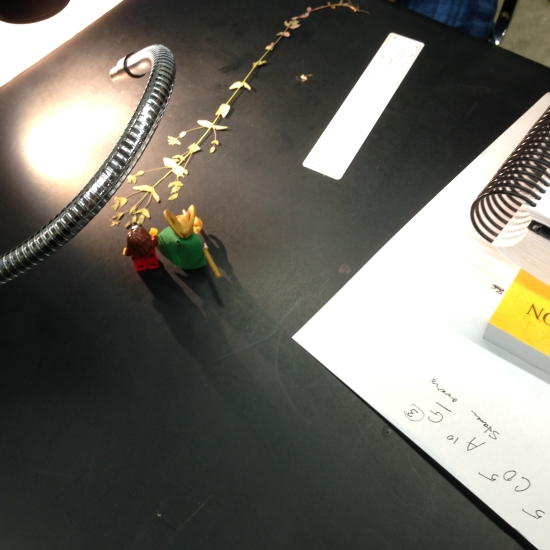 Sleipnir’s monstrous farrier bill!   She is making them work hard!  It’s as if she thinks she can cram a whole semester’s worth of botany into their poor heads in one morning by making them look at “glandular teeth on the inner sepals,” whatever that means.

The human female says that little plant is something called a Hypericum.   She also said that one of the other plants was a different Hypericum.  But ehehehehe!  She was WRONG!  Now she has to admit to everyone that she can’t tell  johnnywart from flicks.

What’s this?   The students, who are supposed to have duplicates of all the plants for their club collection,  have brought some plants that the human female doesn’t have!  (I guess the collecting at the bog wasn’t as organized as she thought.)  So now the human female has to identify things on the spot.  Can she do it?

This one’s not so difficult.  It is a little, carnivorous blabberwort, and there just aren’t that many to choose from.

This one might be a little tougher.  Idunn’s little apples!  The human female is counting how many little thread-like segments are on each of the frothy leaves.  (Not sure how that’s going to help. She can only go as far as five.)

All this counting and peering into microscopes.  (shudder.) It is much too much like work.  Have you had enough keying for one day, Sigyn?  Let’s leave all the plant nerds and go get some lunch.