The human male brought home a “surprise” from the greengrocer today. Sigyn’s excited, but I have a sneaking suspicion that it’s not yummy croutons or tasty cheese or a rich dressing that would go on a salad or, better yet, more cheese. No, I’m pretty sure it’s going to be just another hitherto-untried form of wet cellulose.

I was not wrong.

But it is very colorful wet cellulose. (poke, poke, poke) I don’t trust them.

The human female says they are special, extra-colorful carrots. You don’t say! I can see that they do not conform to expected spectral specifications, you dolt. What I want to know is why they’re all gussied up in fiesta colors.

Idunn’s Little Apples! That was NOT an invitation, mortal, to stand here and deliver a twenty-minute lecture about (but not restricted to) crop breeding and genetics, the importance of phytonutrients, the particular pigments in maroon carrots that enable them to dye anything light-colored in a soup or stew a nauseating shade of pink, the market price of carrots at the rail head*, and the structure of the beta-carotene molecule.

What I want to know is do the different colors taste different? Or is it like Froot Loops, where the difference is just cosmetic?

I think the maroon ones are a little sweeter and the yellow ones a little more earthy. Not sure about the whitish ones, except I can tell they’re not parsnips. I know! Mortal, why don’t you put on a blindfold and Sigyn and I will force-feed you root bits, and you can tell us if there is any discernible difference? I just happen to have a blindfold right here…

*The 2020 season average U.S. price for fresh carrots was $28.90 per cwt, up over the previous three years and 33 percent higher than ten years ago.

This is not the largest or fanciest city in the realm, not by a long shot, but the local Powers That Be decided that it could be one of the best-illuminated during Yuletide.

So here we all are, in Central Park, after dark, to see if the display lives up to the hype.

Odin’s Eyepatch! I think this animated sculpture is supposed to be the North Wind, but it looks too much like my stoopid brother Thor for my taste. (If you scroll quickly, it’s sort of like watching the lights in motion.)

Thor always was a blowhard.

The North Wind/Thor is blowing us toward the Snowflake Forest.

Do you know, I really can’t see any two alike!

It looks like the rest of the park has a series of lit-up figures. Sigyn, shall we just stroll?

A Santa-hatted alien delivering the Yule pie? Were the designers on drugs?

This bear is definitely on drugs.

Hold tight to my arm, Dearest. There is a whole cohort of elf-alien hybrids up ahead.

I don’t trust any of them!

Ehehehe! The human female says this is a proper botanist elf.

He is pointing out the key characters of the Ligustrum bush–opposite leaves, prominent lenticels, and other boring things. Hush, woman! Can you leave no occasion unruined by your constant twaddle?

It used to be tradition to bring the Yule tree home via horse-drawn sleigh.

I suppose a snowmobile is the modern counterpart? Though there do appear to still be sleighs…

But with the reins wrapped around his neck, I don’t give the poor horse much chance of getting very far.

This tree is going places via that most traditional of conveyances.

They appear to have been sampling a rather boozy eggnog.

The camels seem to be much more abstemious and dignified as they promenade among coconut palms.

Sigyn is completely smitten. I suspect she will be asking for a real camel for Yule. The HOA may have something to say about that, but I can deny my sweetie nothing, so they can lump it. (Or would that be “hump it”?)

Best part of all these LED lights?

Cool to the touch and excellent for dangling!

They say there are a million lights here. I’m not sure about that (and I have better things to do than count them), but it really is an impressive display. Someone put a lot of thought into the designs. And so many of the light sculptures move. Still photos don’t do them justice, so I made a little movie. My favorite is the Snow Tank that scoops up the snow and fires it.

Got to get me one of those…

The human female and Sigyn and dragging me out on another Neener Walk. Didn’t we just go?

My innocent question was met with a mixture of scorn (the human female) and gentle reproof (Sigyn.) Apparently, things happen quickly in late spring, with the early spring flowers winding down and the summer flowers just appearing on the stage. It is therefore some sort of moral imperative that we take the trail down by the LUAs (Large, Ugly Apartments) and make note of what we see.

Oh, well, as long as it’s for science. (insert eye-roll.)

The highlighter-yellow false dandelions have been up forever.

And so has the bur clover.

The human female says it has been a good year for dogshade. It’s in all the ditches. Sigyn says it looks like lace.

Thistles are old hat. Be careful, my love. You are up very high and they are very prickly.

Greenbriar is also nothing new. This one is just about to bloom

The farkleberry has nearly finished flowering. If I didn’t know it was related to blueberries, I’d think it was kin to lily-of-the-valley. The flowers look a little alike.

No, human, don’t bother me with the slanty Latin name or start harping on monocots and dicots. I don’t care, and you know it.

The venus’ looking-glass has been out for a good bit. It’s tall enough that the human has to lift Sigyn up to get a good view.

The daisy fleabane started early this year and is gong strong.

We should take some home with us, Sigyn. The human female has some itchy bites she says are from fire ants, but it wouldn’t surprise me at all if she actually had fleas…

This cut-leaf evening primrose has yellow flowers which turn orange as they fade.

I remember the dayflowers from previous years. They’re such an alarming color.

Ah. The spiderworts are up. The human female really likes them.

And so did the tickseed.

Have you noticed, Sigyn, that all of those yellowy orange composites are always EXACTLY the same color? With blue flowers, there is usually some variation in shade, but nope, these are all the same. That can’t be natural… I don’t trust them.

So where is the new stuff? Things we haven’t seen already this year?

All right–the prairie gentians are new. I will give you that.

Sigyn is squeeing! She thinks she has found “an itty bitty teeny tiny one.”

The human female says no, it’s a centaury, and that it’s a cousin of the gentians. That’s right, human. Take all the fun out of my sweetie’s delight with your tiresome pedantry. No wonder you never get invited anywhere.

I don’t remember seeing this before. If I did, I forgot it.

What about this yellow one?

It’s on a small little shrub with shreddy bark. The human female is calling it “St. Andrew’s Cross.” What a ridiculous name. I swear she makes this stuff up.

Odin’s eyepatch! I’ve needled the human female enough that she is barking back at me! “Fine,” she is saying, “If you don’t want to learn anything about botany, show me what you are interested in. What did you see this morning that you liked?”

Glad you asked! I thought this mushroom was neat.

And this. This makes me very happy.

Because it means somewhere, there is an annoying, cute–possibly even squeaky–stuffed animal that has had its puffy guts ripped out.

What a difference a day makes!  A cold front blew through last night, it rained, and it is pleasantly cool and overcast outside.  This calls for a warm breakfast. 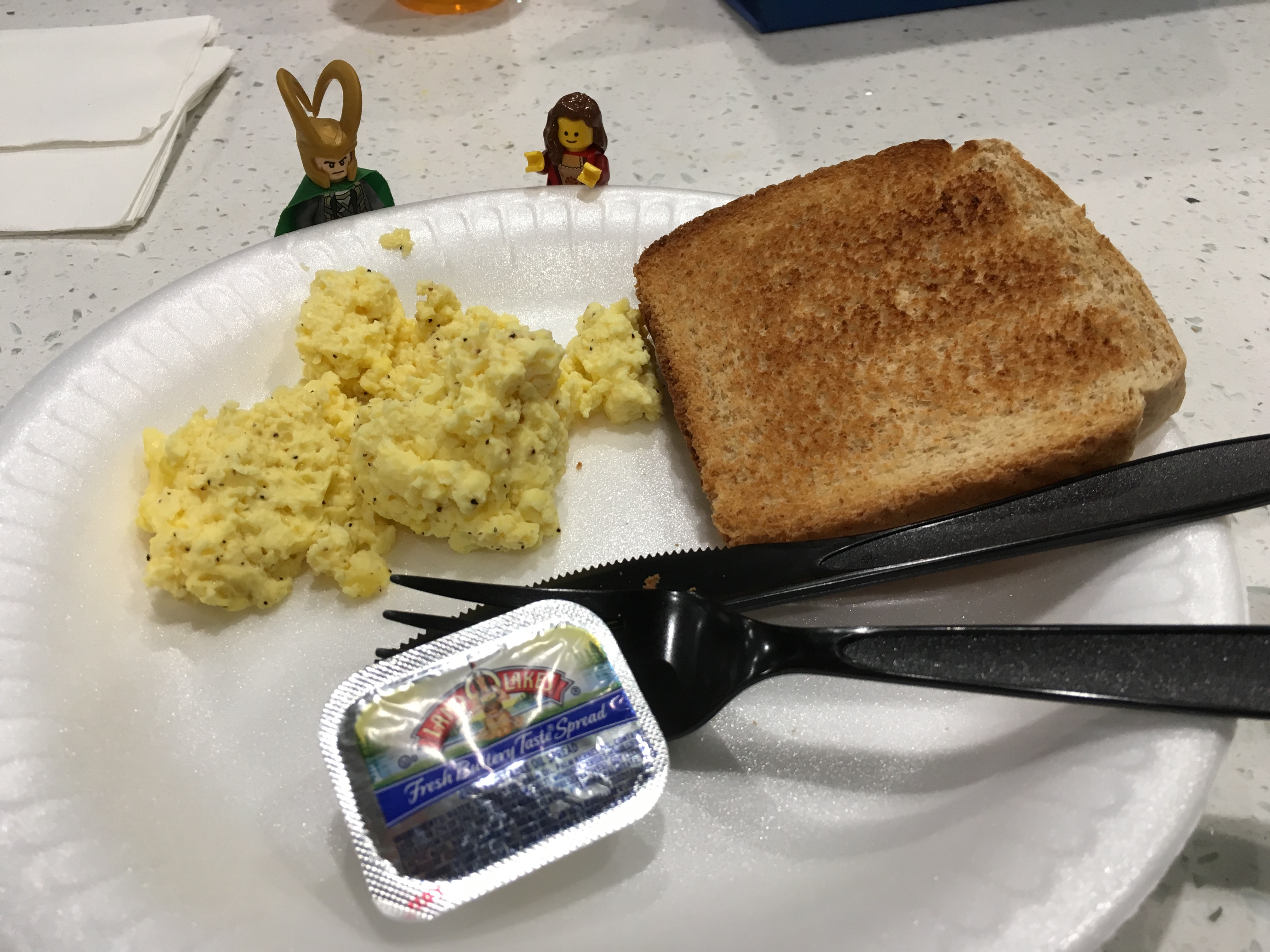 Sigyn’s enthusiastic, but I’m not entirely convinced that those are real eggs.  Or at least not real chicken eggs.  Has anybody checked to see if there are unexplained lizards in the kitchen?

Speaking of lizards, that’s what’s on the menu for today in another way.  The humans had considered visiting another art museum this morning and, in fact, they were on the way there, when the pleasant weather changed their minds and they diverted to the Zoo instead.

It is a very fancy zoo, with lush vegetation and quite a few sculptures.  Sigyn’s not very brave around large live lizards, but this bronze one is probably harmless.

Still, I’m not sure I like the look in his beady enamel eye…  First sign of a forked tongue darting out at my beloved, you brazen monitor, and you get a Gungnir-poke in the snoot.

Small, bright-eyed, curious, terminally perky, squeaky-voiced, and cute as all get out: 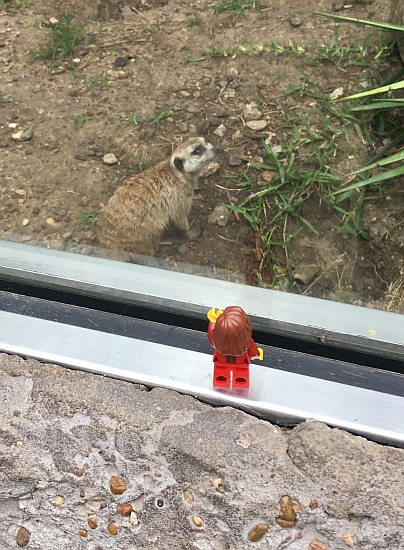 That describes either the meerkat or the person looking at the meerkat.  In fact, can we even be sure from that photo who’s on what side of the enclosure glass?

Here’s another sculpture.  Judging from the shine, this bashful, pint-sized pachyderm gets patted by hundreds of people every day.

But I doubt many of the people who pose for photos with him sit on his head.

I want to see some live animals.  Proper big ones, too, not little members of the Herpestidae.

This will do, though it seems a little under-inflated.

My working theory is that they had it inflated for warmer weather and, now that it’s colder, the air inside has contracted, leading to this general air of floppiness.  Does anyone have a pump?

Lions are supposed to be strong, noble, and powerful.  These lions, however, appear flaccid, ineffective, and as harmless as two under-stuffed sofa pillows.  Mid-morning is rather early in the day to be taking an afternoon nap, gentlemen.

Perhaps they have been hunting all night and are weary.  (Have zoo staff counted the antelopes this morning?)