Great Frigga’s corset, that was close!  If we had stayed in that religious articles shop any longer, I might have had to start smiting things–or people.  It is a great relief that we are gone now and headed off on other errands.

Uh, oh.  The human female has squealingly spotted something and the human male has turned the car around.  If he’s willing to do that in traffic, it must be something good!

Really?  That’s really what this place is called?

This has definite potential!  I wonder if I will get a mention, or if it will be all, “Odin, this” and “Thor, that.” I could definitely do without that.

Or, you know, since Midgard is a silly place and this part of it in particular, I guess it’s going to be, “Anubis, that other thing over there.”

Sigyn, get out of his fist, my love.  You don’t know where those paws have been.

I wonder if the inside is as polytheistic as the outside? 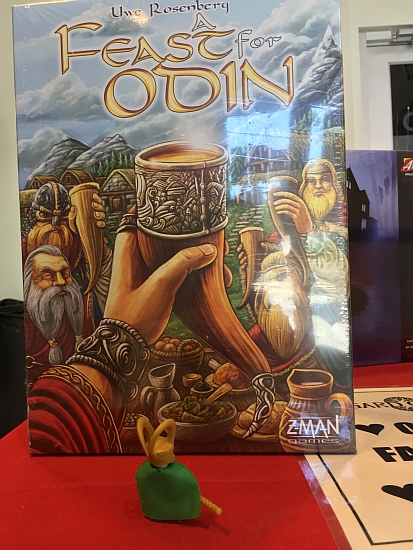 Isn’t there a Loki-themed game here somewhere?  Or is it all going to be Odin or that puppy-headed fellow?

Sigyn has found a quiet little shrine that—-

Uh…Dearest?  Don’t be alarmed and don’t turn around.  Just walk away from the temple slowly.   Slowly…   Come over here by me.  There’s a good girl.

Whew!  Another close one!  Let’s bide here a bit.  This corner of the shop seems safer.  Nothing here but foldy paper cranes.

Oh, now this is interesting. There are several large tables with different “terrain” so that people can  play war games with miniature figures.

Ehehehehehe!  Look, Sigyn!  It is I, Loki!  Lord of Jotunheim, ruler of a kingdom of ice and snow!  And you, my sunny beloved, are queen of the greensward.  Can I tempt you to cross the line and join me in making some snow angels?

Here is a table being used for a game.  These pillars make good vantage points from which to direct strategy. 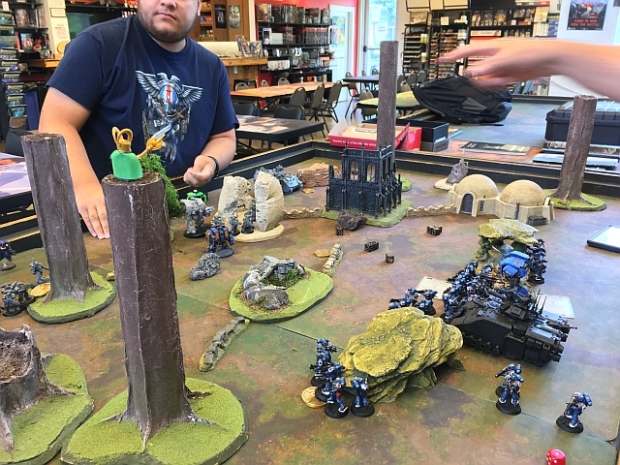 Bring up the war engines! Circle the cross-bowmen around to the right!  Protect the left flank!  Onward, dogs of war! Let no man turn from glory!  Let—

What’s that?  We’re going to the pen shop now?  How on earth is that more important–or more fun!—than wiping out a whole battalion of marauders?

Pah.  You mortals are so boring.  My rule over you dullards can’t come a moment too soon.