I was able to rescue Sigyn from the clutches of that murderous deer.  Horrible creatures, deer, really.  I prefer to think of them as merely the larval stage of roast venison.

There are more skulls here, and they are drawing a lot of attention.  The human female and her minions are showing them off to anyone who wanders by.

Sigyn is investigating the pronounced sagittal crest on this opossum.

The human female says that is where all the jaw muscles are attached.  It certainly looks capable of eating anything it finds.  Opossums are strange creatures–tails like rats, huge rafs of babies which they tote about in pouches or on their backs, fur that always looks like they’ve been washed in the washer on the wrong cycle, and a predilection for rummaging about in compost heaps.

I am more impressed by the dentition of this male vervet monkey.

This fellow looks quite up to the task of perforating anyone who tried to put him in a funny outfit or make him do silly tricks.  And the overall effect is of a toothy little human.

Great Frigga’s hairpins!  Look who has turned up!  Marty, that goggle-eyed menace, has dropped by to ogle the chicken skull.

I don’t want to think about what Marty’s skull might look like.  Not much room for a brain, that’s for certain.

Oh, and here is Fisi, trying to sneak in a nibble on the oppossum.

Sweet Tony Stark on the half shell!  What sort of alien mutant nightmare beast does this one come from?!

Don’t get too close, Sigyn.  I don’t trust this thing at all.

No sirree. I do not trust this thing at all, at all.  Nor can I figure out its modus operandi.  No proper teeth to speak of, but what about these long pincer-like things up front?  What IS it?  Where does it live?  What does it eat?  What does the rest of it look like??

Oh, I am going to have bad dreams and flashbacks about this one, I can tell you.

(Reads label.)  Huh.  I never, ever would have guessed.  Log your guesses in the comments, folks, and we’ll see if anyone comes close.

Sigyn wants to go look at the vetch in the front yard again, before it fades away.  (The human female says it’s a “wildflower” and “pretty,” but it’s really just a weed she’s too lazy to pull.)

Fandral’s mustache! Sigyn, do you see that?

Do you suppose…?  For years, we’ve been hearing tales about the Eater Bunny, vicious devourer of small children and hapless livestock.  You and I have encountered rabbits previously, and last year we assumed we’d proven the tales to be false, but this thing is so huge…

Aww.  It’s cute!  Maybe this one is friendly too and–

Avaunt, fell beast!  Release my beloved before I blast you into hasenpfeffer!

Kick, Sigyn, KICK!  You have to keep him from swallowing!

Quick!  I’ll hold his mouth open while you escape!  SPIT HER OUT, you lapinaceous hellspawn!

Sigyn, dearest, are you all right?  If he has harmed one hair on your precious head, I will flay him alive and make buntings for all the babies in the neighborhood!  Norns’ nighties!  That was close!

Wait!  What are you doing?

Once again, Sigyn’s rapport with animals carries the day.  Ride the bunny all you like, my love.  I’m right behind you, and if he so much as twitches a whisker, I will pith him on the instant.

You heard it here, folks–the Eater Bunny is real.

Sigyn and I are taking advantage of the slightly cooler weather to take a little just-for-us trip.  No boring mortals allowed!  I asked Sigyn where she wanted to go.  After cookie animals and pasta animals, she wants to see REAL animals, so we have made the drive to an African wildlife park.  (The wildlife is African, not the park.  I’ve nothing against the continent, and getting FAR away from the human female would be great, but this place is much closer, and going does not require pesky things like passports and inoculations.) We have hopes of seeing at least some of the “Big Five.”  If I remember correctly, that is:  lions, leopards, elephants, rhinoceroses, and um, er…bi-colored python rock snakes.

I feel cheated!  We have been walking for quite some time and haven’t seen anything yet.  There is a lot of tall grass. I suppose there could be anything good at hiding out there.  Wait! Shhh–!  Do you hear that?  There’s something just over there.  What do you think it—?

Supposedly, this is the part of the park where the elephants spend most of their time.  I don’t see any, but animals love Sigyn so much that, if we stand here for a little, I am willing to bet some show up to snuggle her.

Fortunately, conjuring hay is a trifling spell, so Sigyn can offer him a treat.

Careful, Sigyn!  It is a long way down off an elephant.

Sigyn wants to bring the elephant with us.  Sigyn, my beloved, a wildlife park is not like the animal shelter.  I do not think we will be allowed to adopt your new friend and take him with us.  One cannot simply take home any animal– Yes, yes, I know we have a hyena and an exotic bird at home, but those were special cases and…  Oh, sweetie, don’t cry.  We will come back and visit him again, all right?  I promise.

All the hay and the kissy noises have attracted some attention from another quarter.

The hippo is also a big fan of hay.  Don’t get too close, Sigyn!  I hear that hippopotami have very large teeth.

* Don’t laugh. They make it. And in multiple flavors.  I bought Thor some of the berry-flavored enrichment gel some time back and told him it was like Strawberry Nesquik. He’s been drinking it in his breakfast milk for a month now… 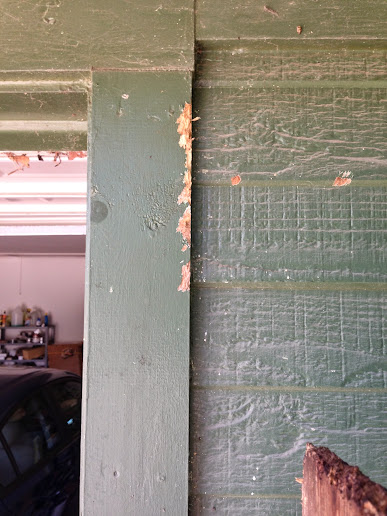