I’m already perfect, so I don’t make resolutions, but I do have a goal or two for this year.  One is to be more regular in providing Mischief Updates.  I write about the Big Mischiefs, but not always about the petty, grinding, day to day naughtiness that I thrive on.  Looking back, I haven’t done one since last summer!  To that end, I’ve decided to just sit and type today, and as far as I get is what you get of my infinite naughtiness.   Looking in my Mischief Journal, I have five and a half pages of notes.  I have been a very, very busy boy.

I had the Purveyor of Head Bones send a Second Notice invoice when they shipped some back-ordered platypus skulls.  It woke the human female up–she thought she was in trouble.  I love that deer-in-the-headlights look.

I made a teensy little power outage one day and the freezer with all of the stock of Useful Bacteria warmed up.  I tried calculating all the lost hours of culturing and aliquotting and labeling, but I gave up after a squillion.  And then I laughed as I watched the human female’s minions clean the contaminated freezer.

I arranged for an endless stream of hungry graduate students to traipse through the human female’s office, asking for Teaching Assistant jobs.  It’s such fun to make her have to tell all of those sad, pleading eyes, “No.”

When it came time for the TA training workshop, the human female and her minions were in charge of taping and playing back the practice mini-lectures.  First, I made all the camera cords look like this: 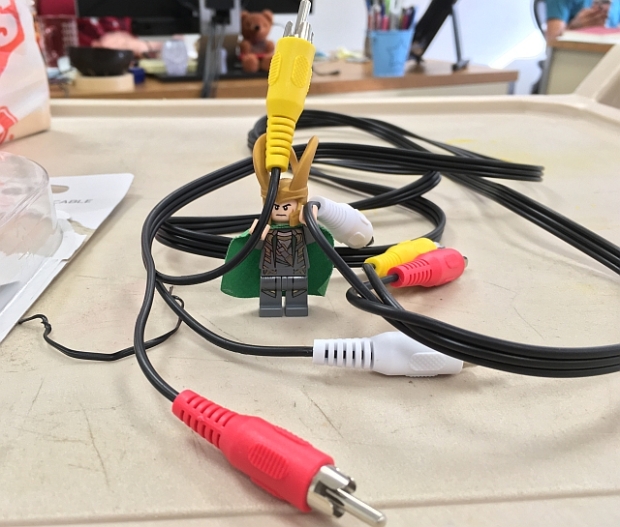 What one goes with which TV?  Are the TV’s similarly color-coded?  I don’t know, and neither did they.   Although the minions had checked all the camera and power cord pairs beforehand, I snarled it all up again and arranged that one of the cameras, on the day of, had the wrong sort of output cable.  Then the camera the human female was responsible for somehow had the recording quality set too high, and it ran out of memory right in the middle of someone’s talk.  Embarrassing!  She had to scramble around and get a card reader from the human male and then quickly find the manual for the reader online while everyone was waiting.  Then, at the end of the day, one of the minions dropped a camera.  Odin’s eyepatch, those things are expensive!  It worked for a while, after a fashion.  The display was gone, but if you knew what the display should be, you could poke the right buttons and it would record.  I kicked it a little overnight and the next day it died entirely.  Ehehehehe.  What do you suppose the human female forgets she is one camera down when it’s time for this year’s workshop?

I tinkered with the departmental computer server so that multiple TAs’ directory permissions….vanished.  Others had their cards inexplicably not work to open doors.  The system that lets the human female code door cards wouldn’t let her log in.  Note to self:  this kind of stunt inconveniences a LOT of people.  Must do again.

The folks who were supposed to show up to sell goggles didn’t.  Cue parade of students wandering into the front office to ask where they can buy them.

There was a whole spate of spectrophotometers misbehaving for no reason.

And that brings us just to the end of the first week of last semester!