I am the God of Mischief, but sometimes I wonder if there isn’t someone higher up the food chain, because I began typing this last week and everything I had just… disappeared.  I have tried several more times since, with the same result.  I suspect the human female’s computer is infested by evil spirits.  An exorcism may be in order.

But anyway, I’ve been busy.  You’ll recall that the human female has been having trouble with her trotters.  She was feeling better, so I convinced her and the human male to go to the Other Big City to the North and traipse all over the botanic garden, the zoo, and several art museums.  Well, she’s been having a lot of pain.  She finally hied herself to the farrier and guess what? 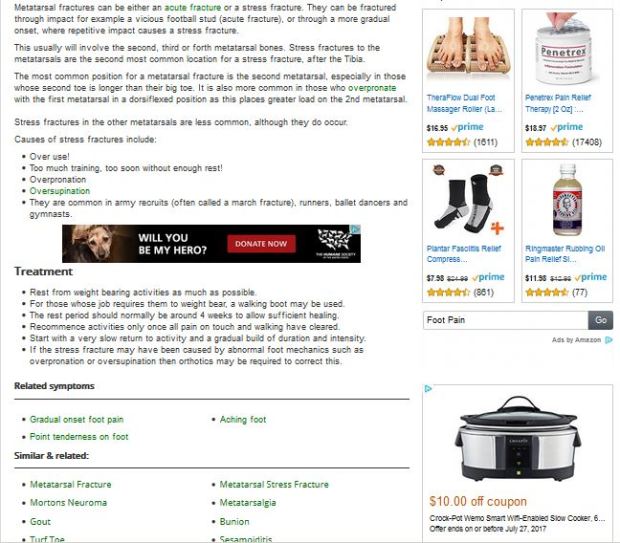 Boom! Stress fracture!  If she didn’t weigh quite so much, her skeleton would not be self-destroying.  Anyway,  it appears to be healing, but I’ve seen to it that her sidebar ads are now all full of foot-related item.  Also crockpots, because fractures notwithstanding, nothing is more important than her getting my dinner on the table.

It’s August. The yard looks horrible, even though the human female has had the irrigation people out again.  She is starting to suspect the business model I’ve coached them on:  On each visit, fix the problem at hand, but break/misalign/misadjust something else so that a return visit is necessary.

The A/C people who were contacted in early July have been unable to schedule the humans for a service call.  “Too busy,” they say.  More likely they’ve heard about how scary the humans’ attic is and are just to polite to turn them down flat.

The City, without warning, has decided to rip up and re-pave the humans’ main route of egress and ingress around the house.  (I have friends on the Roads Committee.)  Last night I arranged for a steamroller to be parked in their alley so they had to go home the long way around the block.  Surprise!

Most of my work lately has been done at the human female’s workplace.  For starters, I have tinkered with the annual registration process for buying chemicals which the Drug Enforcement Agency considers particularly indicative of illicit pharmaceutical activity.  Not only has she had to register all over again this year, but she’s been asked to submit multiple copies of her affidavit, and instead of one which covers all of her suspect purchases, she’d been required to fill one one form for each item.  Who knew iodine was so problematic?

There have been all sorts of fun doings in the hiring department.  The human female’s new Tech I’s do not particularly like one another, and one of them is preternaturally breaky, feckless, and easy to distract.  Trying to replace the recently-departed Tech II is proving to have its own pitfalls.  Two people whom the human female has expressly asked to apply have expressly declined.  One applicant is in another state and will probably not want to travel on her own dime for an interview, one would require months of paperwork to obtain a work permit, and a third is someone rejected for the earlier Tech I position.  The likelihood of identifying and hiring anyone suitable before fall diminishes daily.

The human female was patting herself on the back for coming up with a way to display live centipedes in such a way that they were actually visible to students.  They come in moist paper towel and soil and are very good hiders.  Her idea was to decant them to clear containers with moist filter paper and clear Easter grass.  Last semester, it worked. This semester, they all died. Out of spite, one presumes.

They aren’t the only fatalities.  Someone–by this I mean someone NOT me!– has been sabotaging the live animals.  Two fish tank bubblers were  unplugged under mysterious circumstances, leading to the death of several fish.  Then a millipede was transported from its cozy terrarium to the cold hard lab bench of a room down the hall, where it likewise expired  The culprit remains at large and everyone is nervous. (Please don’t tell Sigyn; she would be most distraught!)

The human female received a cryptic email about a recent Environmental Health and Safety Department (EHSD, AKA Eek! Hazards, Sickness and Death) safety inspection.  She was rather confused, because usually she knows when the inspectors are coming and goes around with them.  After some calling around and some confirming emails, it came to light that it was not the teaching labs being audited but the EHSD.  Next the auditors wanted to examine the human female’s labeling, storage, and handling of dangerous chemicals, again with the purpose of auditing EHSD.  Then the actual EHSD inspectors came through.  The human female feels very, very inspected.  All in all, her work group came through very well, but that is only because I did not show them the Scary Room in the basement.

The human female, ever the miser, has been trying to cut costs in her work group by exploring less expensive formulations of some of the chemicals they use.  For instance, the lab in which the students study the sense of taste by inflicting mysteries upon one another surely does not require the most pure formulation of sucrose for the “sweet” solution.  She has been successful in identifying cheaper alternatives.  Her Prep Staff is enthused.  Her boss is not.

The human female got a lot of test tubes the other day.  Except she didn’t.  They were for someone else.  Recent deliveries have been about 5% Other People’s Stuff.  I know, I know, it’s a really appalling figure, but I swear I’m doing my utmost and I hope to have it up to 10% shortly.

In the meantime, I have fun with the shipments that are hers. She recently had to purchase a pull-down projector screen to replace the one in room 323 that would no long retract.  (Who knew that swinging on one would do that?)  She bought it over the phone from Stapler (no mean feat, since they do not admit to having a purchasing phone number on their website), since she had to make sure it was sold tax-free, as this realm refuses to pay taxes for any reason whatsoever.  She specifically requested that they mail her an invoice showing the lack of fees assessed as well as the word INVOICE in very large, very obnoxious letters, as the Departmental Bean Counters cavil at paying from mere packing slips.   She received the shipment the very next day, along with a packing slip showing a price different from what she was quoted, along with a heaping helping of state sales tax.  She called asking for rectification and was helped by a lovely individual who promised to take care of it right away and send a re-rectified, tax-free INVOICE.   What appeared in her email box was a credit memo for the tax, but no INVOICE.  She called and talked to a different helpful person who provided her with the number of a  third helpful person who proved to be associated with Stapler’s rewards program but who promised to re-re-rectify the situation.  The next day the human received a PACKING SLIP with the right price but without the magic word.  She called and spoke with another delightful person who abjectly apologized and promised to send a re-re-re-rectified INVOICE. The next day the human female received a PACKING SLIP showing the correct price and a credit memo showing the tax coming off the original purchase.  The human female, deciding that for once the Departmental Bean Counters could just *deal*, forwarded both to them with an explanation of the whole sorry fiasco.  It’s quiet so far, but I’m hoping to have more fun when the credit card bill comes in.

Remember the piglets and the human female’s case of PPP?  After multiple calls to the vet school and the chicken farm, no action on getting those porkers on a pyre was forthcoming.  The piglets began to mysteriously disappear by ones and twos into the dumpster (which is legal, just not preferred.)  Then one day, the vet school called, offering to use the defunct swine to test their new incinerator—for free!  Success!  That only took, what four months and ten phone calls?

Everything takes longer than estimated.  One of the new Tech I’s pointed out, quite rightly, that the emergency eyewash in one of the prep rooms was positioned in such a manner (at a sink which is below some overhead cabinets) that it was physically impossible to put one’s eyeballs into it.  A Work Order was submitted to move the eyewash to the other sink in the room.  This was accomplished.  Sort of.  Something something about the top of one of the faucets being lost, thus engendering a geyser, and then more something about another visit to fix that and not having the right part and then still more something about finally having to actually swap the whole faucets and something else about the workman in charge being sacked.  You can tell I didn’t really pay attention.  The human female had to run up and down the hall multiple times, letting workmen in, which is all I cared about.

It seems the human female herself cannot perform even the simplest of tasks in one go.  Recently she was tasked with affixing the new emergency contact signs to each of the lab room doors.  Not only were the little signs of a size not easily divisible into a sheet of laminating film, forcing her to piece the things, she ran out of laminating film halfway through the project.  And she ruined one.  And this woman has two degrees?

All of this flopping about like a headless fowl tends to give the human female a bit of an appetite.  Most days I make sure she packs a healthy lunch. Sometimes I even do it for her.  Why, just the other day, I made her a delectable cheese sandwich.  And hygiene is so important to me that I even left in the little protective square of paper on each side of the cheese.

So:  home, yard, work, food.  I have, as the Midgardians say, “all the bases covered,” (whatever that means) and I count myself content.