Remember, O reader, the order of  microscope slides for which the invoice went to the University’s campus in Qatar?  Not once but twice?  The order that was partially back-ordered, with each part of the shipment being billed to the fine folks in the Persian Gulf?  The order for which the human female spent many hours on the phone and with email, trying to straighten out the billing so that she could pay for her thrice-damned microscope slides?

I thought you might want to see what all the fuss has been about. 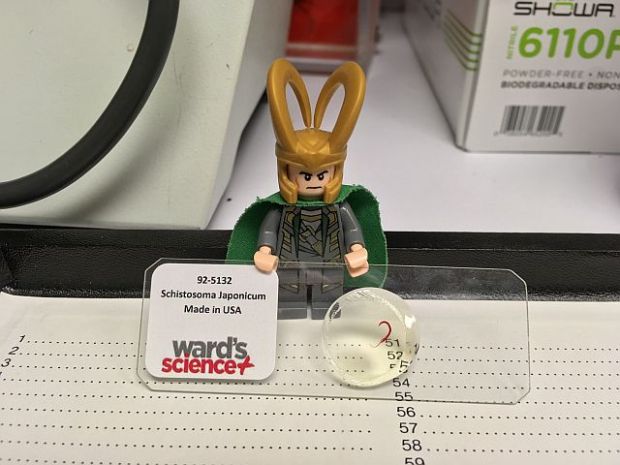 Behold Schistosoma japonicum.  Three of these slides formed the back-ordered portion of the order.  You see, it take a while to prepare them, since each features not one but two parasitic beasts–a tiny male surrounded by a more massive female.  Yes.  You read that right.  Schistosoma japonicum in flagrante delicto.

These slides arrived last year.  Last week the human female received yet another tender note from her colleagues in Qatar, a note which enclosed a note from the Vendor Who’s Responsible helpfully pointing out that the account is now 120 days in arrears.

Cue wailing and gnashing of teeth.  The human female remonstrated yet again with the Vendor Who’s Responsible, begging them to do as the original PO says and submit the invoice to the proper email address.

All good fun comes to an end, I suppose, because the invoice was finally correctly submitted to the Bean Counters here on the main campus.

Who refused to pay it.

The human female pleaded, and tried to explain the situation, outlining how the two entities were fundamentally the same, and would they pleeeeeeese pay the invoice?

What is that delightful Midgardian expression?  “No dice.”  Is that right?  The Bean-counters cancelled the invoice and demanded that the Vendor Who’s Responsible issue a new one with the name of the VWRSbVWR instead.

Which they won’t do.

So now, the Vendor Who’s Responsible, sick unto death of trying to sort this out, has given up in defeat and cancelled that line item of the original PO, saying, “Forget it, pretend you never ordered those amorous schistos, and let us never speak of this again.”

You would think that this would bring an end to the human female’s misery, and that six months is a good enough run for a bit of mischief.

But you’d be wrong.

The latest email from the Bean Counters on campus to the Customer Service Rep at the Vendor Who’s Responsible is short, sweet, and promises more fun to come:

“Per your email below, I have cancelled PO line item 4 on the PO.  What about the other PO lines?  I do not see where we have been invoiced for them.”