Last week, I made sure that the humans got a whole load of judgey, depressing email.  Today, I’m working my mischief on the humans’ regular mail as well.

I know for a fact that the humans enjoy getting the mail.  There’s always the chance (however remote) that there will be a letter from a friend, an interesting catalog, or even the needlework kit that the female ordered back in JANUARY.

Bill, bill, auto dealership ad, flyer for a new pizza restaurant—nothing, really, to make the sixty foot trip to the box in 100-degree heat worth it.

Oh—wait.   Ehehehehe!   I’ve been planning this for a week or two, but I didn’t think it would come today.  The envelope’s just appealing enough on the outside that the humans may actually open it.

Civic pride, and all that.

Look!  Kids!   No one can resist giving money to something that’s for kids.

I sent out a thousand of these.  Even if only a few  recipients respond, it’ll net me some useful cash.

Fandral’s mustache!  The humans are laughing and pointing.  What?!  The wording is perfect!  I spent a lot of time on this.

Thanks to my intervention, this year’s Dead Cat Ballet took on the ominous proportions of a complete staging of the Ring Cycle by that Midgardian composer who had a deft hand with a catchy tune but rather woefully uninformed as to doings in Asgard.

Act V:  Since I last updated, the human female received notice that her two pallets (a suspiciously small number…) of Dead Things would be short sixty-two defunct cephalopods and three fish cadavers, backordered and shipping as soon as possible.  Well, it happens.  She can cope.

Act VI: The human female arrived at work this morning to discover that not only was one of her techs late to the party, Outsourced Overcharged Physical-plant Services (OOPS) had failed to remove the post in the double doors, the critical step in the ballet upon which all others depend.  She immediately phoned the dispatch office, where she was placed on hold.  Once connected, she employed some strong-yet-ladylike language stressing the importance of this simple task being done.  The person with the magic key arrived and performed his perfunctory function literally as the delivery truck (twenty  minutes early!) rolled up to the driveway.

The actual transference of pallet to jack to elevator to second pallet jack to hallway to sorted shelves of 2,417 pounds of Dead Things occurred in a respectable forty minutes.  It would have been swifter, but the Purveyor of Dead Things, knowing the human female likes puzzles, saw fit to include several unlabeled boxes which had to be opened to discern contents, plus a number of “mixed content” boxes that had to be opened and portioned out.  Thus the immortal lyrics:  “Okay, I’ve got squid, brains, and eyeballs.”  “More eyeballs, grasshoppers, and four fish.”  “Brains, grasshoppers, and clams.”  You must admit that is vastly more amusing than putting all the brains in one box, all the eyeballs in another, etc.

As they were unpacking the second pallet, the human female and her techs discovered the strategic placement of the boxes of extremely fragile microscope slides.

(Stop moaning, woman.  At least they are right side up!)

Act VII:  The boxes safely on shelves and the pallets and wrapping properly disposed of, it was up to the techs to count the Dead Things, to make sure what was ordered corresponds to the packing list and the actual shipment.

Tech II came upstairs a while later and handed the human female this annotated packing slip.

Of the sixteen line items in the order, seven were inaccurately fulfilled.

While she was pondering this failure of someone at PODT to perform basic numeration operations, Central Receiving called to let her know that her backordered squid and fish, sent via Fed-up and Exhausted, had arrived and were to be delivered to her momentarily.

They arrived and were censused:   Yes, sixty-two squid  (one leaking) and three sad little fish.

Thus, all told:  The nine sharks are nowhere to be found (actually not unusual this time of year; she expected that.)  The human female is also short twenty five clams (enough for a nice batch of  Dead Thing Paella), ten fish, one package of ten sheep eyes, and an inexplicable two hundred and twenty pig hearts.   That is enough pig hearts alone to make up another entire pallet.  (Told you the number of pallets was suspiciously small…)

On the positive side, she has four extra frogs and ten extra pig kidneys, so there’s that.

Act VIII  (Great Frigga’s hairpins! Are we up to VIII already?)  The Grand Finale:  This year’s Dead Cat Ballet ended with the unannounced and completely unanticipated arrival of a second Fed-up and Exhausted shipment of  FIVE ACTUAL DEAD CATS, the final piece of last August’s Dead Cat Ballet.

I am certain that, as the Purveyor of Dead Things tries to sort out what happened in their shipping department and the human female continues to fight for every clam and each lidless ovine eyeball, there will be a revival, a sequel, an epilogue, or maybe an epitaph upon the Dead Cat Ballet of 2017.  Whatever subsequently transpires, I think you will agree this is one for the record books.

The knittery friend’s house is full of interesting and beautiful things.  Take for instance, this sparkly new carafe.  It’s one of the old-fashioned ones with the glass that goes on upside down for a lid.

Sigyn is quite entranced by the shiny.

You can stay and admire the carafe as much as you want, sweetie. 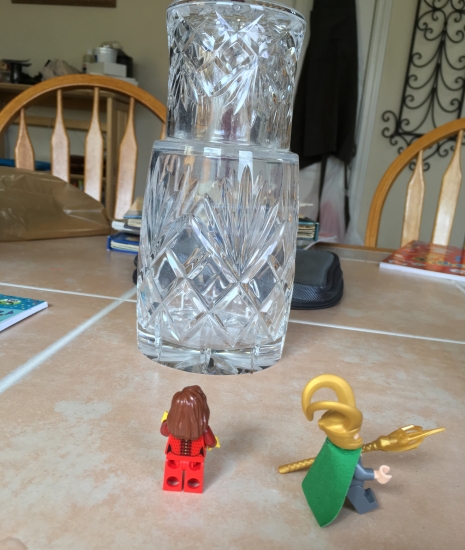 I’m going to go see if the children have any fun new toys.  I’ll be back in a bit.

Not a moment too soon, evidently. 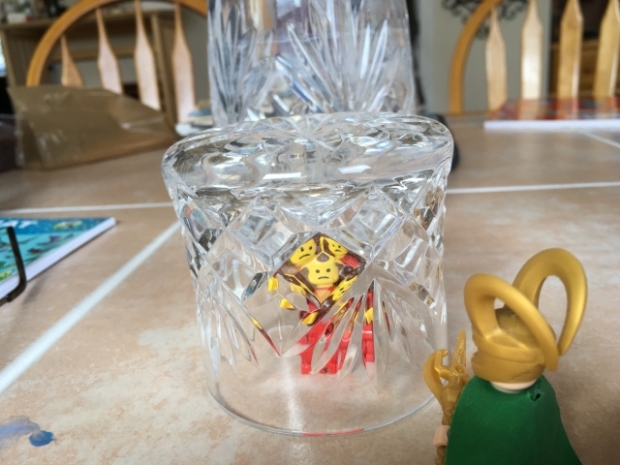 (later)  Now that Sigyn is recovered from her fright, it is time for some adventure.  The knittery friend’s clever spouse has installed an ingenious pegboard in the kitchen.  It is useful for getting all the odd-shaped bits of cookware out of the cupboards.

How are you doing down there, Sigyn? 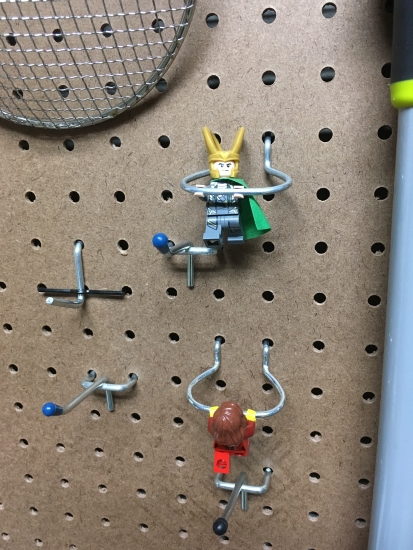 I have conquered the wall!  Time to jump down and go in search of celebratory beverages!

Um, Loki, you might want to keep up with your horticultural experiments. 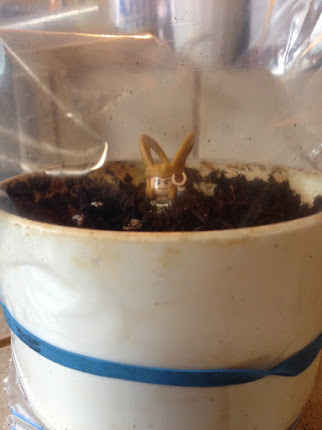